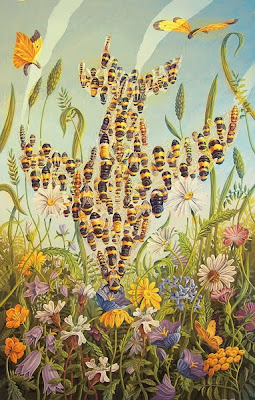 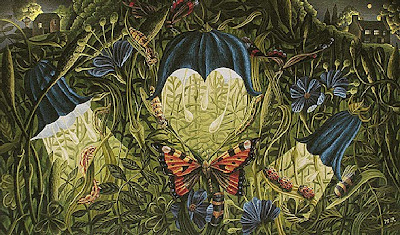 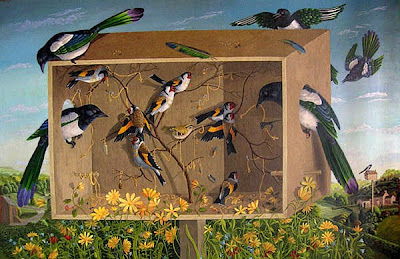 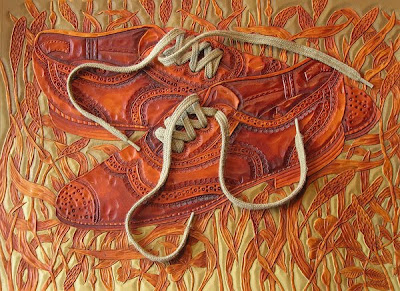 It would be unfair to let our latest exhibition come to a close without talking about the artist Mark Rowney.
Without Mark there would have been no exhibition. It all started from the day I stumbled across his painting 'Aerobombus' on the Internet whilst following a "lead" on another artist.
One look and I was hooked. Like many people I have long been a fan of the artist Kit Williams [famous for the treasure hunt book 'Masquerade' ] but I had never come across work that equalled it until I looked at Mark's work, not only was this as good but he had taken it onto levels that Kit had never dreamt of.
I just had to show this work. From this obsession an exhibition was born.
Mark is a man of many, many talents but is also the most down to earth person that you could ever meet.
Having said that it paints a different picture from the man that I have come to know, let me tell you a little about him.
Mark is the son of a cowboy, and grew up on a 'cowboy' ranch. Hhhhmmmmm! Maybe not that unusual, apart from the fact that this ranch was in rural 'County Durham' not Texas.
Both his parents were committed cowboys and they ran for many years a Cowboy Ranch in England. Mark says that from an early age dressed as a [confederate soldier]he can remember directing cars to their places in the car park, so not the normal childhood but a lot more exciting than most, it seemed that Mark had the 'boyhood' that most of us dreamt of,
but for Mark this was all a part of everyday life.
He eventually went on to study art at St. Martins Collage in London, but it is his story of his homecoming that I will never forget.
Whilst away he had grown his hair long and dyed it yellow [as you do when young] but before returning to the 'Ranch' he at least had the foresight to call his Mother and warn her, she promised to "break the ice" and tell his father.
Returning home Mark says everything was "fine" except for his father who sat "drumming" his fingers on the arm of the sofa saying nothing, and who eventually got up and walked out of the room,
to return Minutes later and proclaim " just look at yer, what are you turning into"?
These comments coming from a man dressed in a 'Stetson hat', wearing leather 'chaps' and with
two 'six guns' in holsters.
"I realised then", Mark said "that my life just wasn't going to be normal".
It hasn't been, but it would take many more hours than I have to even give you a glimpse of it.
Mark has had many "artistic" adventures around the world, I would suggest the best way to learn of them would be to give me a call then we could all arrange a [very long] evening in a pub to hear them.
Mark is one of the most interesting, exciting yet humble artist's that we have had the pleasure to show and I "really" hope that our association continues for many years.
Here is just a tiny taste of his work.
Posted by imagine at 10:13