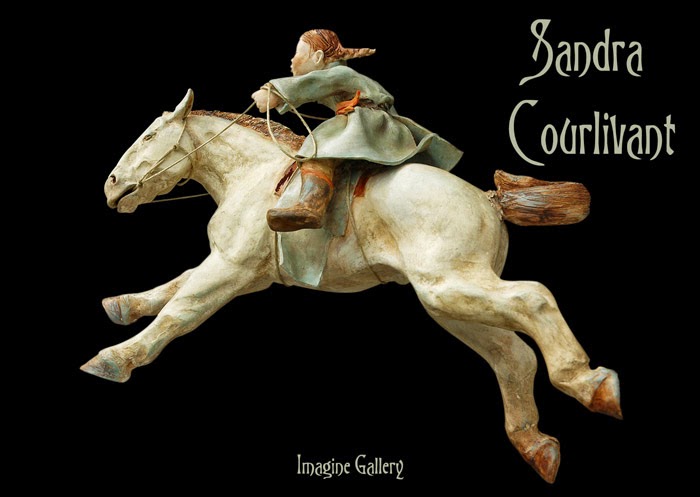 Where does the time go?
I notice that less and less people seem to be writing their blogs, well for certain I am writing less.
Perhaps, like me everyone has no time just to write a few words each day.
There are some notable exceptions fortunately so at least I can have my daily "fix" learning
what they are doing with their time.
The things that they write make me appreciate that none of us are really that different,
wherever in the world we may happen to live. 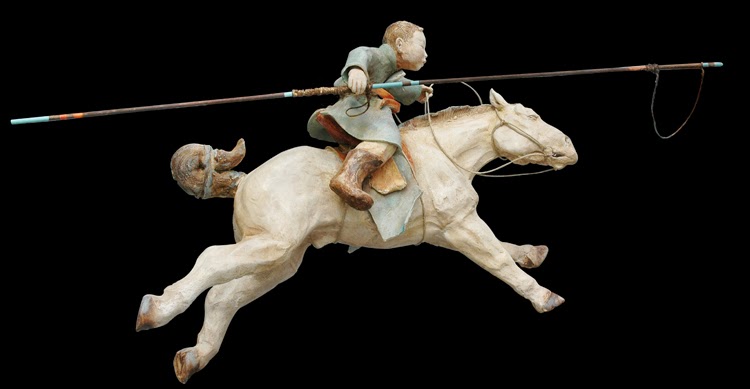 It is the appreciation of how much smaller the world appears to be that has prompted this overdue post.
My only excuse for not writing before is that I have no time.
At least that is how it seems to me, my days just disappear almost as soon as they have started.
Late each night when I lock the doors to return home I vow
[even when I know I won't]
I will write the "blog" first thing tomorrow. 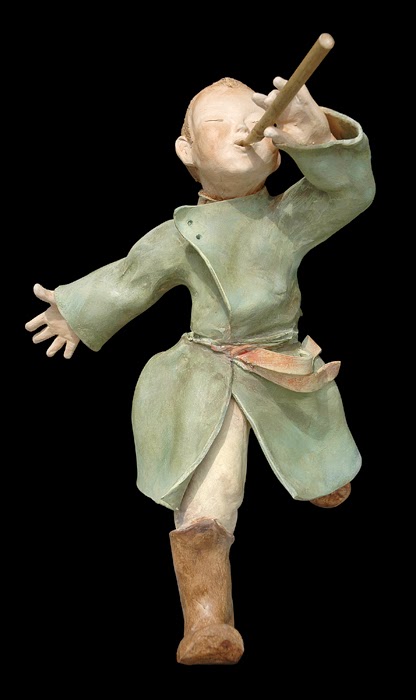 The reason for is because last weekend we held the opening of a new exhibition by the sculptor
'Sandra Courlivant'
She is a French artist, and as such lives a great distance from us, but it doesn't feel like it.
Because as I said the world seems smaller, and I suppose that is because of this, "the Internet"

I have corresponded and have gotten to know Sandra over the past year,
which still seems strange when you have never met a person, but with pictures and words
you can form the basis of a relationship.
I certainly feel as if I know her. 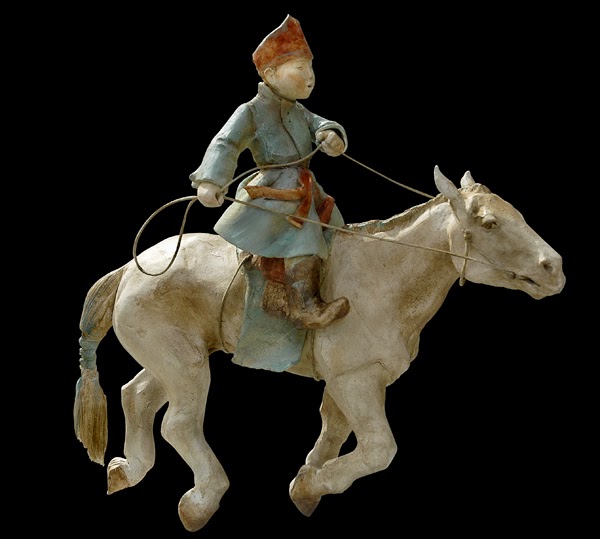 So when I arrived at the airport to collect her and Matiilda her daughter I wasn't meeting a stranger.
She was visiting England to attend the opening of her first UK exhibition,
which of course was here in our gallery.

I have seen many pictures of Sandra so I was certain that I would recognise her.
However, she had not seen one of me.
I helped her by sending her a very detailed description of myself
"old man, white hair and white beard".
Modesty prevented me from saying "good looking", but that's the kind of man I am,
plus I didn't want to awe her.

I arrived late [which is normal] and I could not see her anywhere amongst the crowds at "arrivals".
I started to panic and looked to check that her flight had arrived.
It had, so where was she?
I felt a tap on the shoulder and heard the words "hello John".
My description had worked,
although she did tell me it was only because I looked so worried that she just knew it must be me.

Obviously someone must have tipped her off as I had never told her that I always look worried. 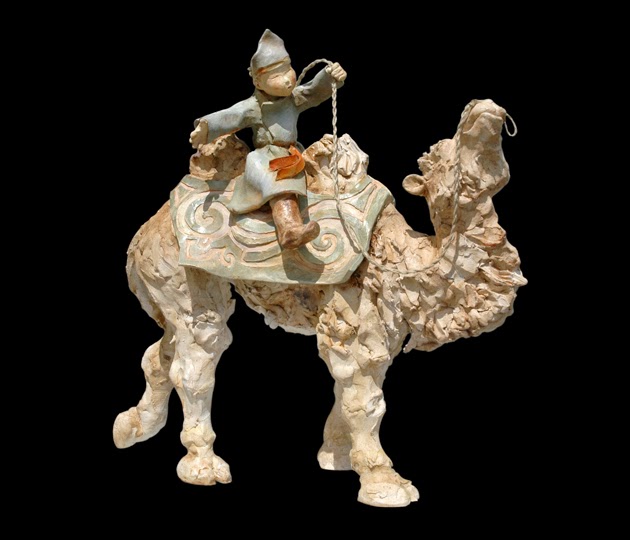 Despite the language barrier [on my part] we were soon engaged in conversation as if we were old friends, which I suppose we were even though we are new friends. 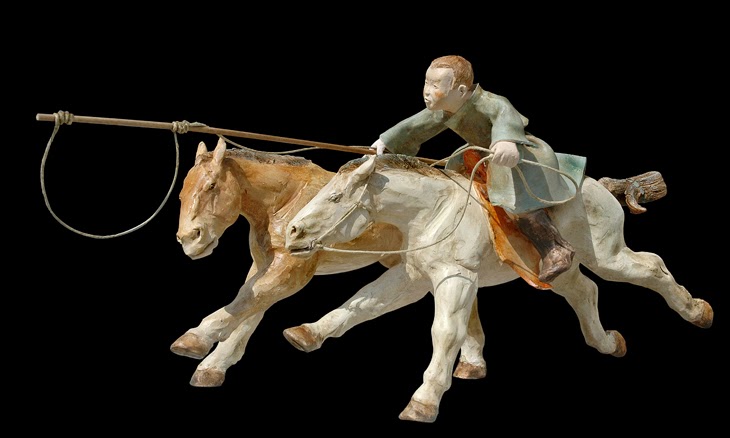 I have wanted to have an exhibition of her sculptures from the moment I first looked at them
[on the computer of course]
but it has been a long journey since the day we first made contact.
Her work is very fragile and she had been concerned that it could never make the journey intact.
I persuaded her to let us try a few pieces and that if they received a good response then we would
somehow work out how to send a complete exhibition from France.
She agreed. 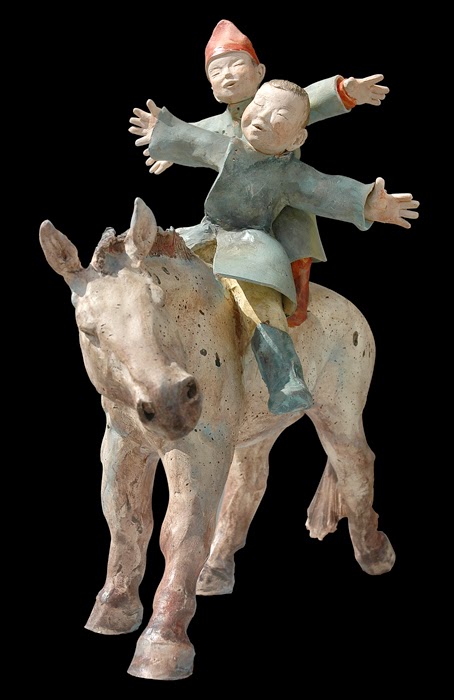 The initial sculptures received a fantastic response and all were sold very quickly.
People really responded to them for many reasons,
They are innocent, gentle and beautifully crafted, and as one customer told me
"I have never seen anything like these anywhere".
Nor have I, they are really unique and so very different.
When looking at them it is impossible not to have a smile on your face,
they make you feel good inside,
that's a rare thing. 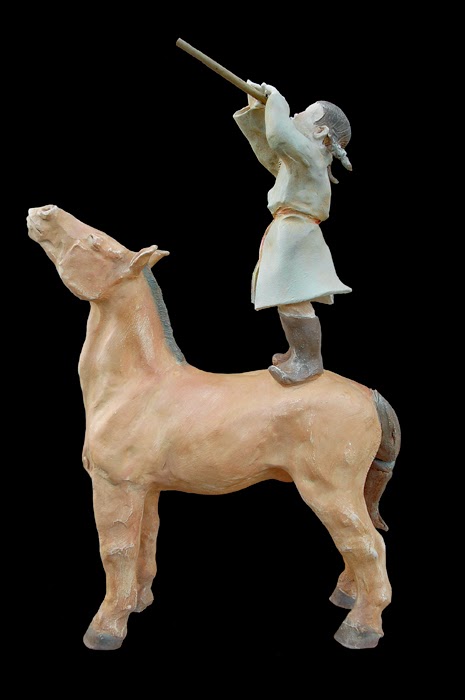 I have often wondered where her ideas come from and what is the source of her inspiration.
It was no great surprise to learn that the instigation came after she had visited Mongolia on a riding trip.
How many people would do that?
[The last time I rode was at the local stable a mile from my house].

She returned home from Mongolia fascinated by the land, the culture and in particular the interaction
between the children and their animals.
It is these that form the basis of her work.
It is the way that she has been able to re-create the pleasure of the children that has fascinated everyone.
In fact there is one lone figure of a little girl would have sold five times over.
But we could only sell it once.
Fortunately it was purchased by a friend who lives close to the gallery so this means I will see it again,
because the other five potential buyers were not alone in their desire for this piece.
I would have loved to own it. 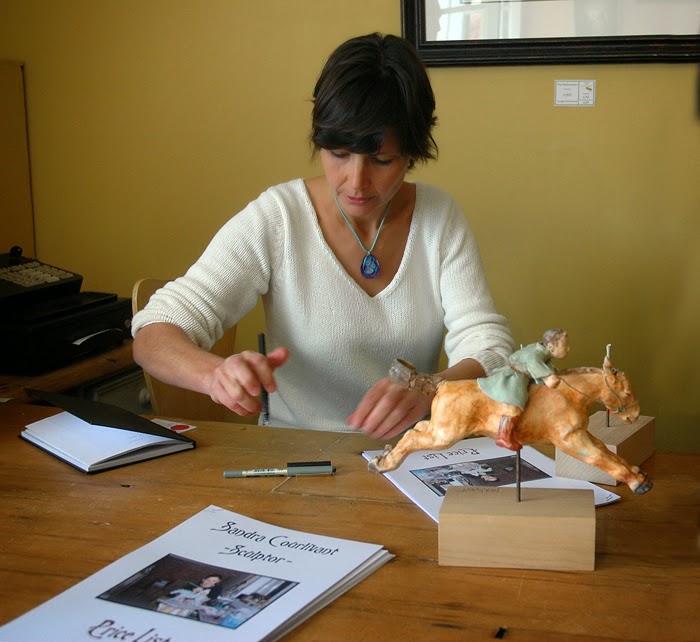 People [including me] asked would she create more versions of this same sculpture,
understandably she is reluctant to do this, she wants to move forward.
Yak's!
"That is what I am now creating, Yak's and a caravan".
[I don't think she meant a caravan on wheels]

What is strange is that although each sculpture was signed this wasn't enough,
Because she was here people wanted sculptures signed again.
So with her smaller sculptures Sandra had people waiting while she hand signed the wooden base's.
One person even wanted the rusted iron base of a large sculpture signed,
she had to pass on that.
I suppose it was because her unexpected presence here that made it a special event and everyone wanted their own personal reminder of the day. 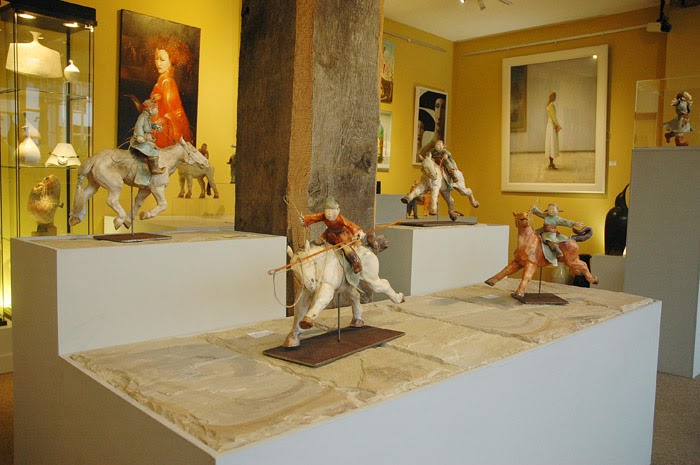 It was a fun day,
exhausting but really enjoyable and a day we plan to repeat sometime, if she will.

Now my new [but old] friend is back home with her family in France a long distance away,
but I realise that if I type quickly I can be there in a moment.

Europe, now seems a much smaller and much closer place, especially France,
which is good because our next exhibition in October is with my friend
Anne Bachalier.
I have not met her, but I know we are friends and I can't wait to greet her.
Especially since I have practised my French on Sandra.

Learning all of the time, that's me.