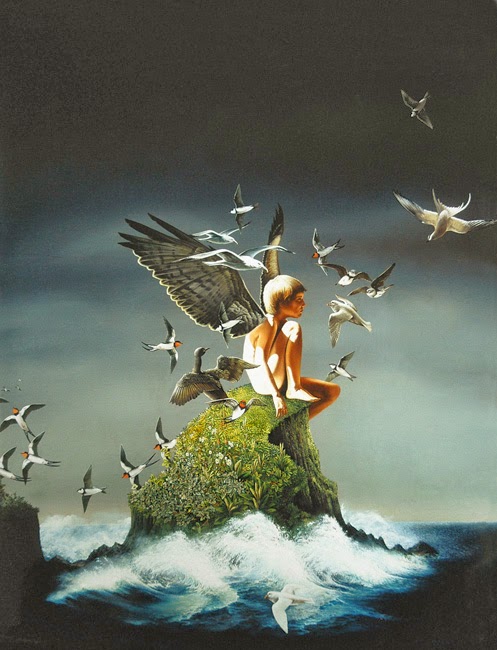 It seems that it has been a long time since I last hired a van and travelled around the country
collecting different pieces of art.
This has been in some way deliberate as I am often told by the various creators
"you are the only person who comes to collect."
I must admit that this has always surprised me, as one of the best "perks" of having a gallery is
having the opportunity and excuse to visit the various artist's at their studio's.
OK, that studio might just be a shed and to be honest I do prefer to call them workshops
but as it is accepted that artists create from studios, then studio it is.
Visiting these workplaces has always been a pleasure, plus also an opportunity to learn a little more about the creator.
But, it seems that every time I make a trip I lose the best part of a week in the gallery,
which means that then a few days are spent "playing catch up".
So I made a decision that this year I would spend spend less time travelling. Like all resolutions this one is doomed to failure.
I was starting to get "cabin fever," the need to get out and meet artists was getting too great,
plus the quickest and safest way to get new art here is to get in a car and collect it.
So, this post is about two artists that I went to meet last week.
Larry Learmonth and Nicola Godden.
There was a third artist I visited but I will leave him until next time. 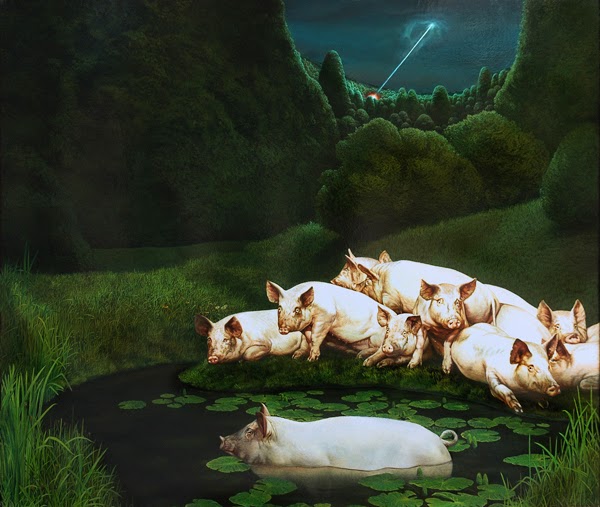 I had the pleasure of visiting Nicola at her home and studio but Larry I met "half way"
at a service station, which wasn't as much fun but it did save another six hours driving,
and at least we had the opportunity to meet in person for the first time.

Larry by his own admission is not a young man, he told me he was 104
but I think that was a little bit of an exaggeration by a few years or so.
He has been a very successful artist all his life, a lot of his work has been used in advertising
and I am sure that most of us would recognise some of his work without knowing who the artist was.
He was introduced to me by my best friend who used to be his agent.

My friend [who lives in Spain] called me a few weeks ago and told me
"you must do something together with Larry Learmonth, he has stopped painting,
and he needs someone to motivate him and bring him back to life
Johnny you have got to do it".

Mission accomplished.
We now have on display one of Larry's greatest paintings
'A Minor Prophet'
The painting is very 'pre-raphalite', the attention to detail is amazing, each and every blade of grass is shown. The painting is of a moonlit pool with bathers, well actually only one,
this is a pig, but as we all know "pigs can't swim"
Which gives the title.
The other pigs look on, wondering "does she know something that we don't?"
The painting is well known and was the centre of a lot of controversy, as it had been earmarked
to be the winning entry for a very prestigious.
It didn't win but the famous art critic Brian Sewell commented
"...with accomplished technical ability now rare, yhe painting combines the traditions of English neo-Romantic landscape with an eerie and enigmatic surrealism that leaves the spectator with a profound sense of unease".

I'm glab that it did not win as it is now hanging here in our gallery and I love the "sense of unease".

I hope our relationship with Larry continues until he is at least 110. 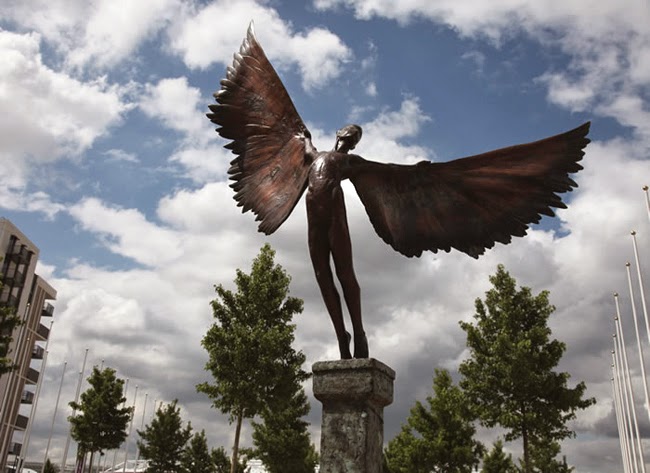 Nicola Godden
is also a very recognised artist, again an artist who we were perhaps unaware of as we viewed her sculpture.
She created the giant 'Icarus' figure that was displayed at the London Olympic Games.
Little did I appreciate while watching TV that some of this artists creations would eventually be here in
Imagine Gallery.
It is the sort of thing that you dream about.
It was by total chance that someone visited the gallery [while on holiday] and told me
"I promote a lot of artists, some I think might interest you".
He told me to "check out" the artists that he promoted, so out of embarrassment I looked.
As I suspected there was a lot of "sand," but there in the sand was one large gold nugget.

A few hours later Nicola and I were having our first conversation.
Yes!
She was prepared to let us show some of her sculptures.
A few weeks later after lots of "near misses" I collected two of her sculptures.
I say near misses because as fast as I was choosing the pieces that I would like to exhibit they were selling.
This of course prompted me to make an immediate visit. 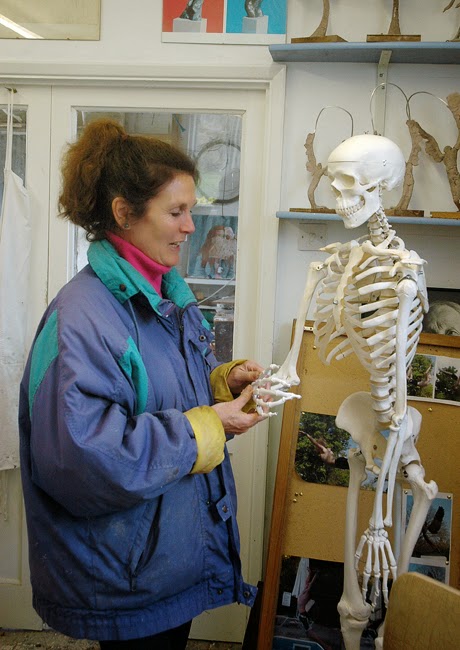 I love to visit the workplace of any artist but with Nicola it was even more exciting
as she was just coming to the finish of a new sculpture.
Icarus

She explained to me that she was becoming obsessed with the theme of Icarus, and has more planned.
A subject I am equally fascinated with, in fact I am planning an exhibition
next year on this theme.

It was fascinating looking around her workplace viewing the many pieces in planning, construction,
finished and discarded.
By discarded I mean pieces that were no longer needed, like the wing of the Olympic Icarus
which stood propped against a wall.
To me these pieces seem almost more precious than the finished piece of art. 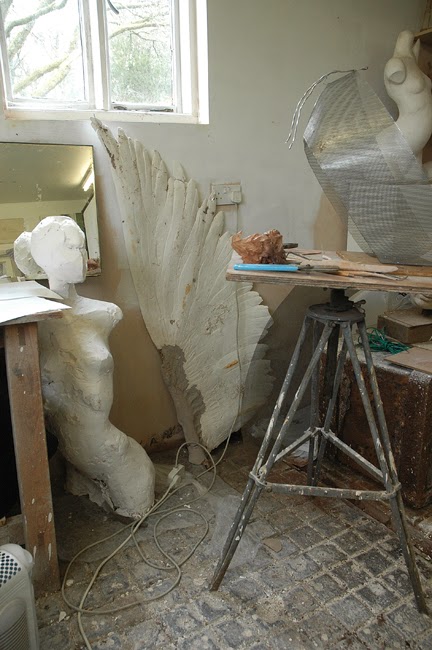 I felt privileged to see such things,
they all add to the "jigsaw" of what makes an artist, which I appreciate I am fortunate to witness.

What was more exciting is that I was allowed to see her latest sculpture
before it went for moulding and bronze casting.
Another Icarus. It was hard to appreciate the making process, until I understood that the mesh
that supported the wings would be removed from the plaster mould
before any casting was started.
I find it hard to understand how sculptors are able to work with rods, wire and cables protruding from
their work, yet are able to look beyond this to the finished piece of work. 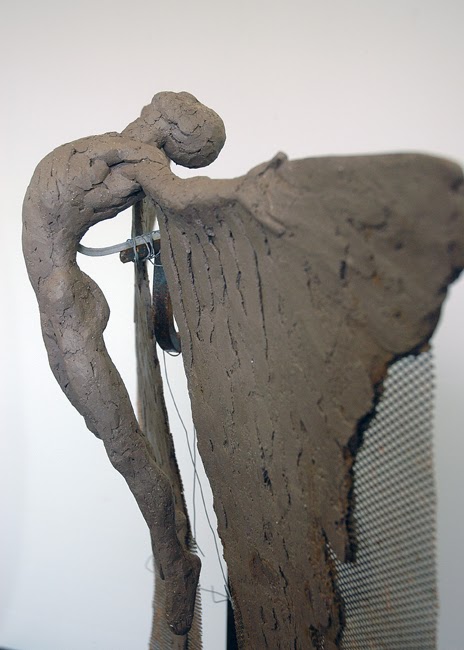 The next time you or I will ever see this sculpture again it will be made of bronze.
A piece of art that will last for generations.
How it will look, what "patination" the bronze will have I just don't know.
At the moment that is all locked in the mind of the artist.
I just understand that I was very fortunate to witness seeing a piece work at such an early stage,
in fact the clay was still damp.

Thinking about my visit to see Nicola,
perhaps what stays in my mind the most is that in her home there was very little of her own creations, almost everything displayed was by another artist or sculptor,
artists she admires, sculptures she loves.
Like all good artists when it comes to her own art she can only see faults,
while others see only the beauty.
..................

The 'Bird Boy' image by Larry Learmonth image shown at the top of the page
is from a limited edition of ten signed prints exclusive to our gallery.
We are hoping that interest in his art will encourage Larry to wash his brushes and start painting again.
Posted by imagine at 10:01 4 comments: 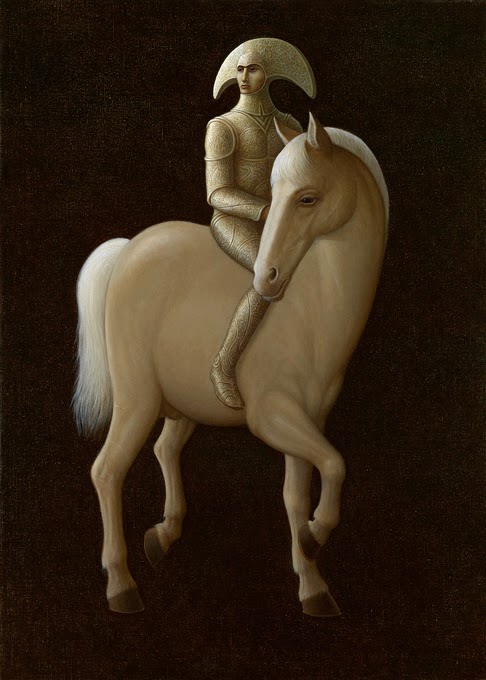 Whenever we have an exhibition in progress or new work on display I am in a constant state of worry.
It seems that I am unable to really enjoy the art that we are showing
as my thoughts are constantly turning to "just what will we have arriving next"?
What can I show people?
I suppose I am one of those people whose "glass is half empty"
never half full. 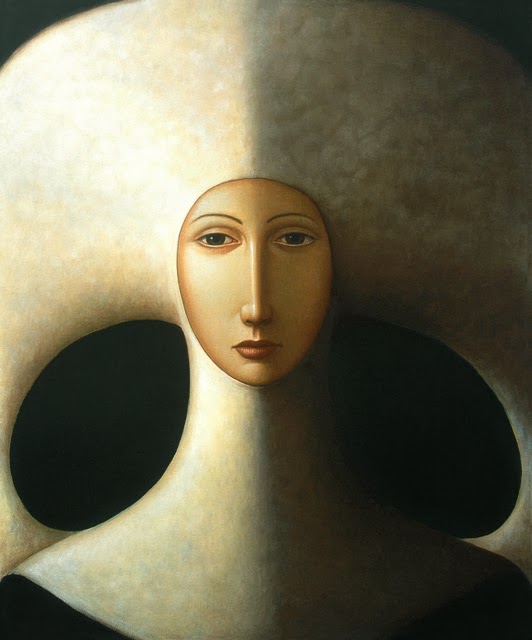 I suppose I am a serial worrier, after all if there wasn't something to worry about what would I do?
[Irene said, "decorate the house"].

What I really mean
is that I am constantly concerned with thoughts of "how do I follow up a display like that".
Yesterday a customer was talking to me and he remarked
"what I love about this place is that it is different every time I arrive, I never know what to expect
it changes so much".
This was interesting for me to hear because my constant fear is that I don't change enough. 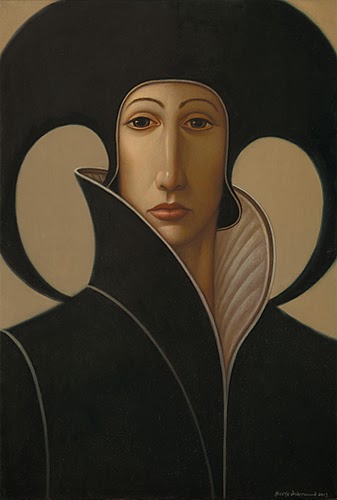 Well I suppose I do, but I think that what I mean is I don't diverse from what I love,
I am very content to show more and more by artists that I love.
Even if they are artists that are new to us there work will never be a dramatic shift away from
the art that constantly moves me.

At times I get carried away and think that I really do own everything that is on show
and that this is my own personal collection that I allow the public to view.
Which in a way I suppose it is,
It is not owned by me but it is a collection of things I love. 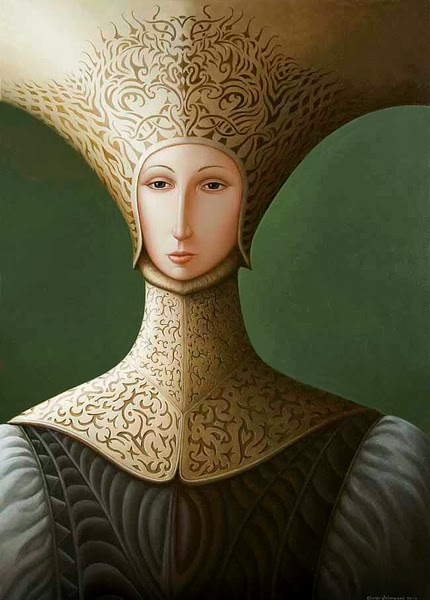 Because updating the Blog was well overdue I started to think about what hadn't been shown to you.
Ten minutes later I had a list so long I decided that I would make this post
a small one.
I started to think to myself
"by the time I have written about and shown 'those' I will have to write about 'that',
but I haven't even shown 'them' yet..................."

I had forgotten how many lovely artworks I have not got around to showing everyone
and as I will soon be making the first of many journeys to collect new art
I thought it was time to start catching up.

What better way to start than by showing our latest additions by
George Underwood?

The picture at the top which is titled
'The White Rider'
It has never been shown as it was purchased by a very famous person as soon as it was completed.
The version we have is the first print that has ever been produced
an Artist Proof.
There may be others produced but at the moment it hasn't been decided.

Of the other pictures?
One sold as soon as the painting was hung on our wall,
another is now displayed in front of me,
and the last?
Well! Perhaps I had better go and start framing that right now.