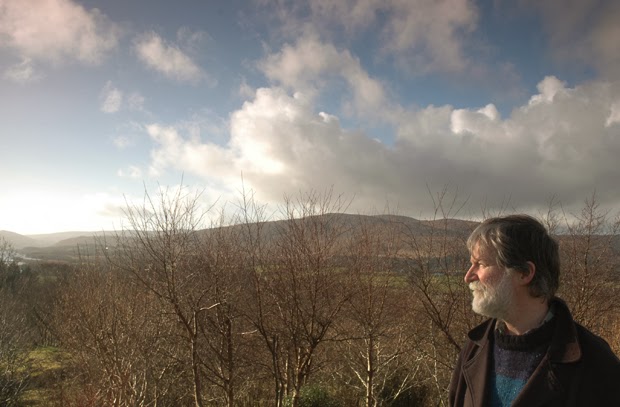 Very recently I made a journey to Ireland the reason for the trip was to meet with the sculptor
Christy Keeney.
It is a visit that has been intended for a long while but one that has been delayed and put off several times.
The reason was to interview Christy for an article I am due to write
about the exhibition that he will have with us here in May. 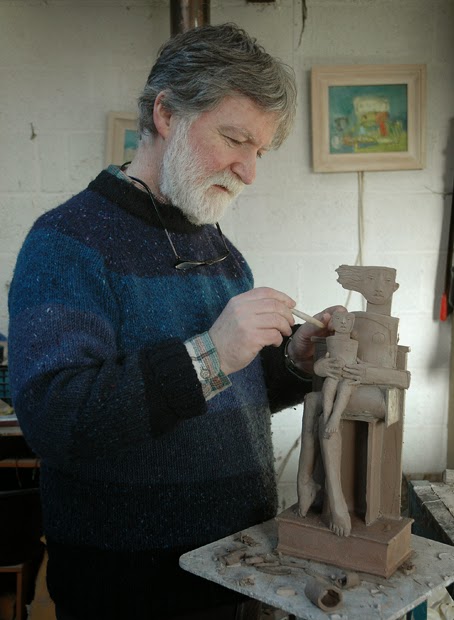 This was to be my first visit to the North of Ireland,
he doesn't live in the part that is linked with the UK, he is just across the border in the real Ireland,
but it was strange to be visiting a place that has names that we are all familier with from
the "troubles". I was interested to see this area that we have heard so much about,
but I was really more interested to learn more about the artist I was to meet. 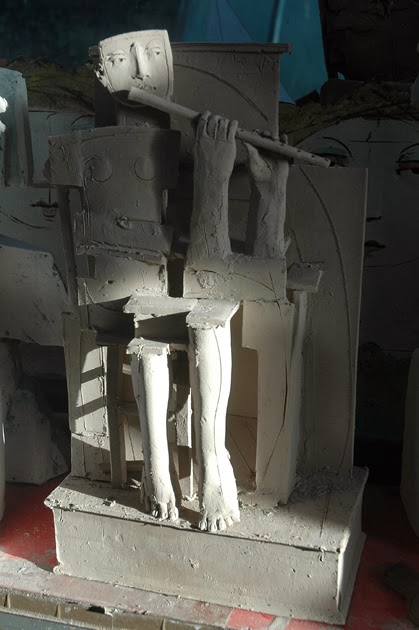 We have shown his work for many years,
Ever since a customer came into the gallery and asked did we have sculptures by Christy Keeney.
"No, but I will contact her", I replied.
The strange thing is that many people [like I did] think that Christy is female.
I can assure you all that he is very much a male, plus one of the nicest artists that I have met. 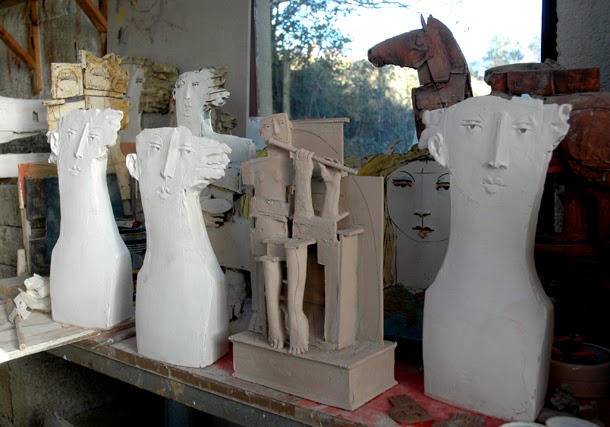 Although now I have known him for several years I didn't feel that I actually knew the man
and with our exhibition in the near future and the promise of a five page article about him and his art
I decided that it was time to try and learn a little more about the man and where
the ideas behind his sculptures come from.

Christy is a well collected artist, his work can be found in galleries in many parts of Europe
but nobody seems to know much about the man himself.
This isn't really surprising as he is one of those rare people who "listens" to others
and speaks little of himself, his art speaks for him. 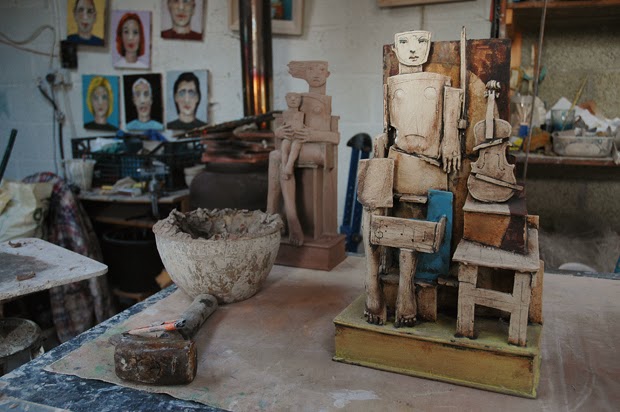 He collected me from the airpot in the morning then we set off for his hometown
'Letterkenny'
where we stopped to have breakfast in a traditional old Irish cafe.
"Costa Coffee"!
Just what is the world coming to?
I wanted to see Ireland and what did I see?
That's progress for you.
Fortunately after our "Irish coffee's" we headed off for his home and a taste of his Ireland.
His home and studio.
The location was high up in the hills and the view was spectacular, within minutes I understood why
this artist had left London to return to the place where he had grown up.
It is beautiful and peaceful. 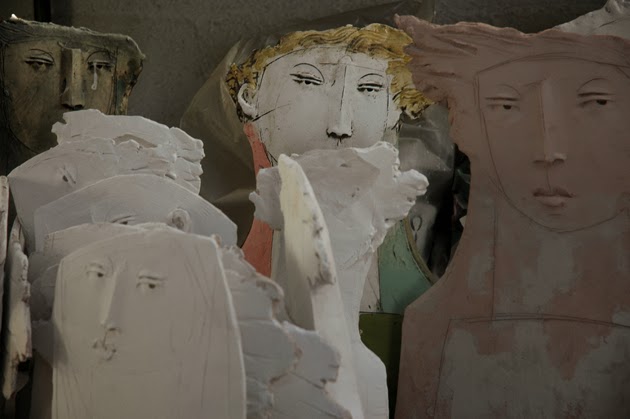 I can imagine that the only distraction from his work is the stunning views from every window.
I arrived with the early morning sun dazzling the windows and left with the same sun
now more gentle but still lluminating the same rooms.
From his home you can see the sun rise and set without leaving the spot you stand on.
This unexpected beauty wasn't why I had travelled so far, I had to get inside the man.
Something much harder than I had imagined. 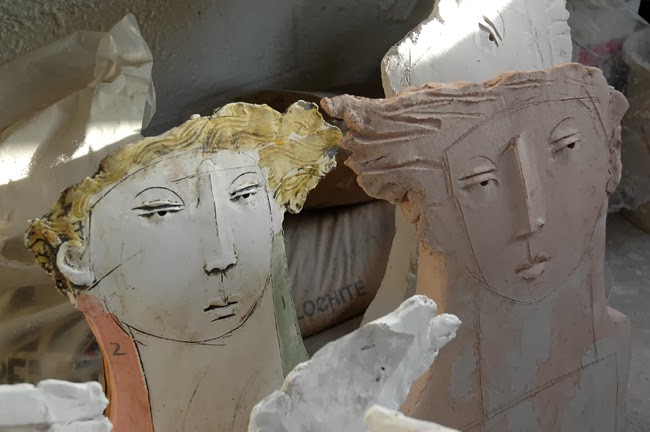 The reason for this is because Christy doesn't know himself where his art comes from.
It is just him, it comes withought thought.
I suppose for an artist to analyse too much about that would end up with them killing the source.
He did urge me to question him but I was happy just to observe and absorb everything that
he said and what I saw.
I wanted to just take in a little of his world. 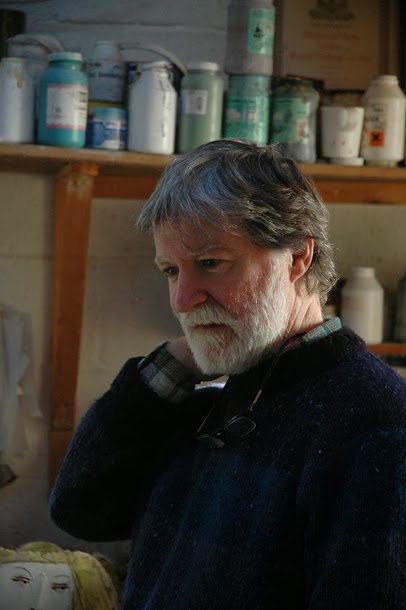 With a little prompting he did tell me many stories.
The most enjoyable of these was how he came to be an artist for Royalty,
Prince Charles was once a model for him.
Well, that's not exactly the whole story, that involved him being a "bit drunk" and a little outspoken,
but as a result he ended up at Kensington Palace, getting Charles to stand on chairs,
pulling funny faces while he snapped away with his camera.
He showed me the photographs which few people will ever see,
they are fantastic and show Prince charles as he has never been seen before.
At ease, relaxed and obviously enjoying the event.
They were also bloody good photographs and I am sure that to someone they are worth a fortune.
But they will never be seen by the public as they are private,
it was just a moment in time for them both. 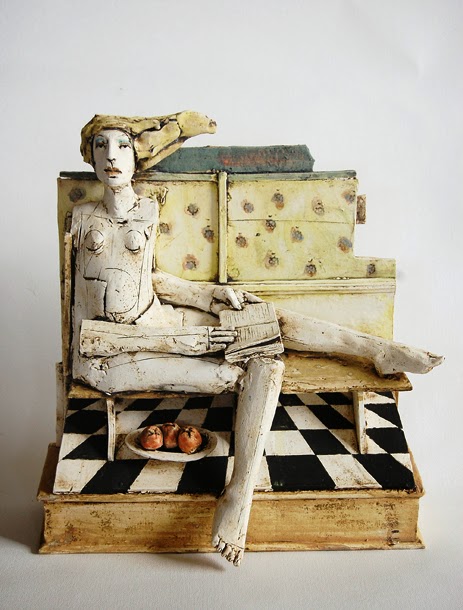 He told me that he was never really happy with the sculpture he created for the Prince,
as he was trying to create something which he felt another person would be happy with,
it wasn't being made just to please himself.
I agree, Christy is much better creating his own sculptures that come from?
He doesn't know where.

They are made to please him, they also please many others.

He spoke of the few people he admires and who have influenced his work, and this gave me a small understanding of where his creativty was born,
but in reality it is from somwhere inside him, a place he doesn't question.
I enjoyed my short visit to see him perhaps more than any I have had to meet an artist,
I felt that I returned home with a friendship and I look forward to our next meeting.

A little "footnote" to the visit.
On my return to the airport in Derry
Christy had to stop at the post office to send off a sculpture to France,
He came out laughing, talking with a woman,
getting back into his van he explained that she ran the post office,
they were laughing because she had been telling him how she had just been robbed at gunpoint.
"She told me, it goes with the job", he said.

It was so strange to hear a story that fitted with all of the news that we have been told about the North,
but it didn't fit with the beautiful places and the lovely people that I met.
None nicer than Christy.