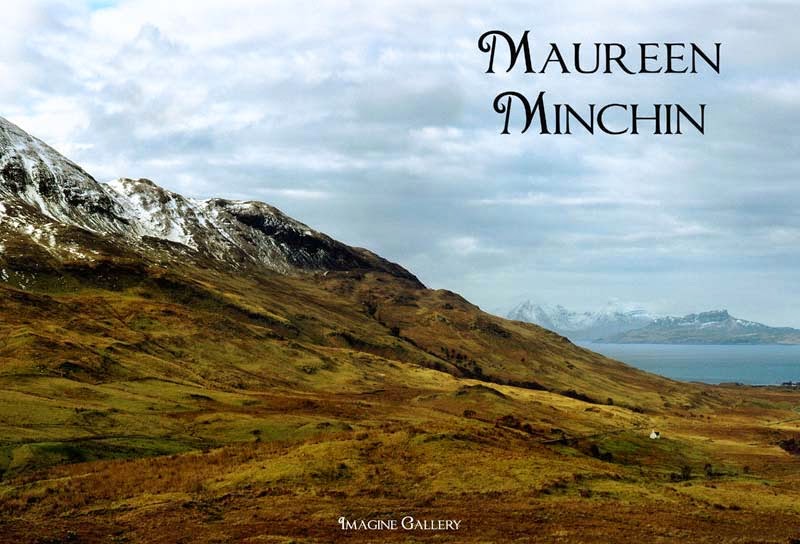 Although we still have a few months before our next occasion I thought that maybe
I should make a small mention of it now as we have already started to receive calls and emails
from different collectors
They have all wanted to confirm the date of the opening as they intend to book a local hotel
for the weekend. 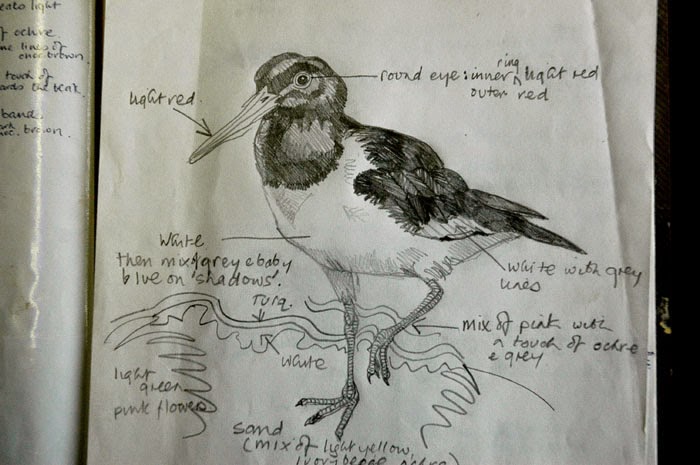 This is not exactly normal for an exhibition but nothing to do with Maureen ever is.
The last time we exhibited her work there was a queue formed outside the gallery when I arrived
some three hours before the opening.
Her ceramics have always been highly collected but now she is featured in London Auctions
it seems her ceramics have been discovered much further afield than Suffolk.
We often have calls from different countries, with people asking when we might have more in stock.
The answer is always the same
"We don't know, five years maybe". 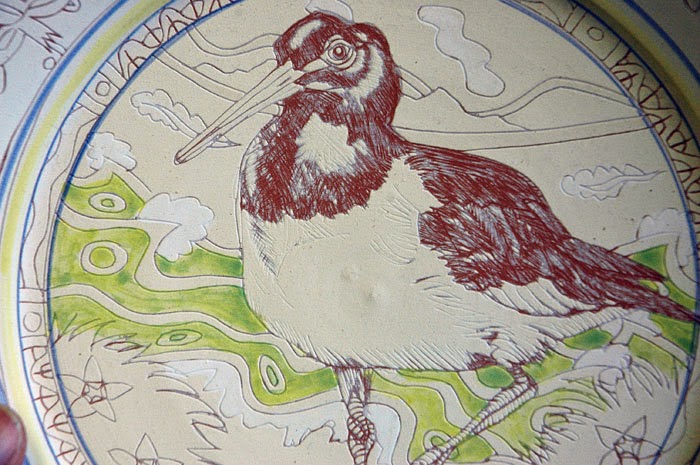 Although she was originally a potter from Suffolk, long ago she left us
And now lives in a very remote part of Scotland.

At the beautiful location where she now lives there are few houses and even fewer people,
But she has become very involved and an important part of the scattered community. 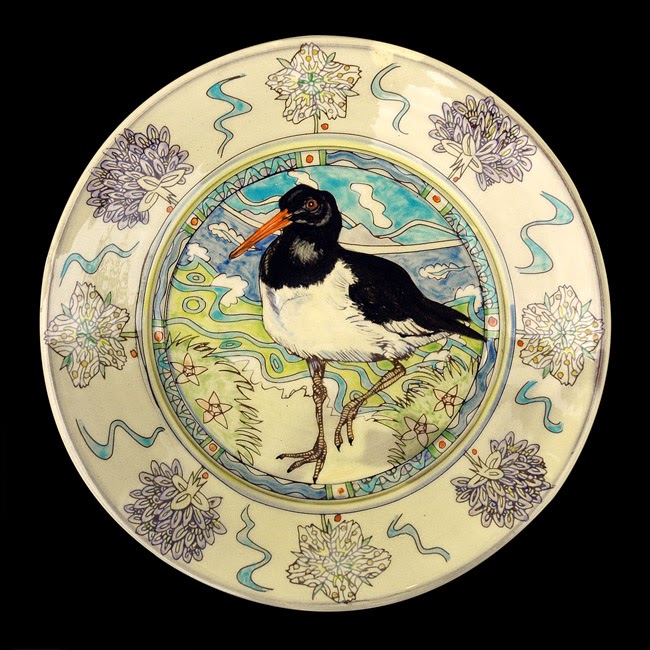 She once told me that the potters that she respected were Michael Cardew and Bernard Leach.
Mostly because of the way they had lived their lives and what they had contributed
to the their own communities, providing jobs for local people at locations which [then]
had little to offer in terms of employment.

On my last visit Maureen had some local people "helping".
Not that I think she needs any ones help, she is a miniature dynamo, working constantly.
I think she had their help for other reasons, I felt that she was helping. 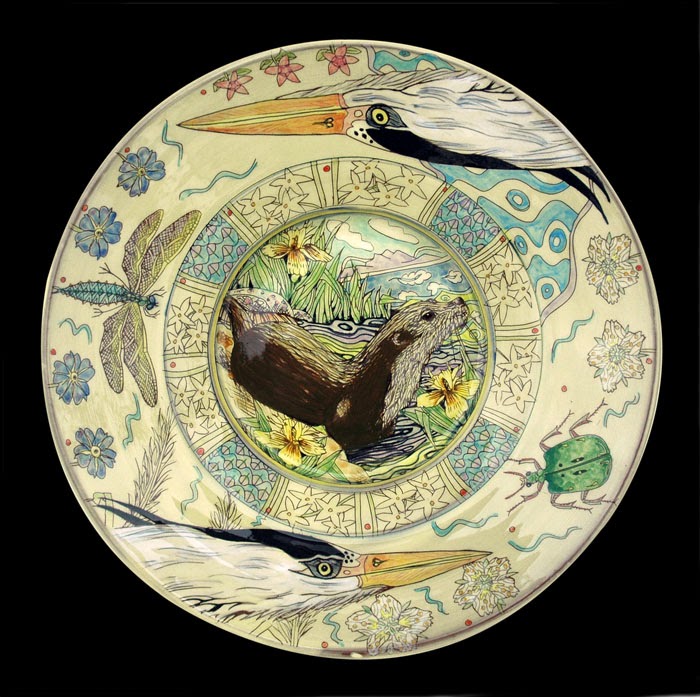 Nature, is her inspiration and I think that needs no explanation
But it is the labour intensive detail of her work that I have trouble coming to terms with.
Each terracotta pot she creates is dipped into "slip" [thin white clay]
then decorated with a needle,
or as some potters describe it "scratched" so that the red clay is revealed to form the image.
Most potters working in this fashion will tell you
"it takes a lot of time". 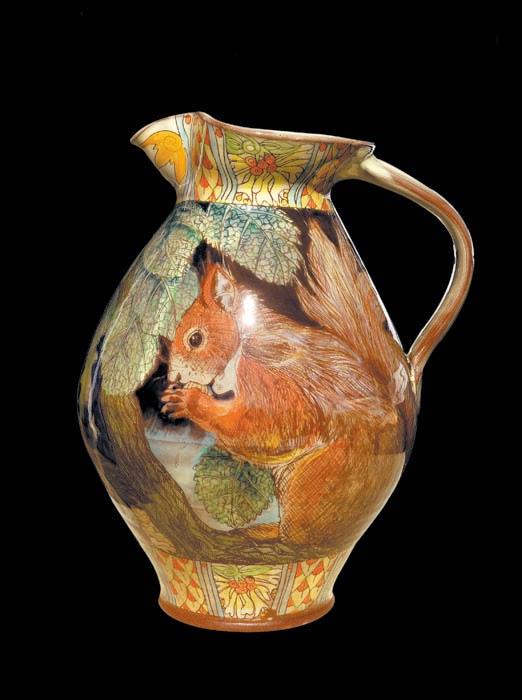 I have never heard Maureen make such a comment, it is just what she does.
Her pots are not priced upon the hours of labour, they are priced as vessels for use,
just made in her way and her style.
I have questioned her on the wisdom of spending hours decorating a mug,
egg cup or a small cream jug.
"Surely you would be better spending that same time working on a large piece
that will command a higher price"?

It made sense to me. 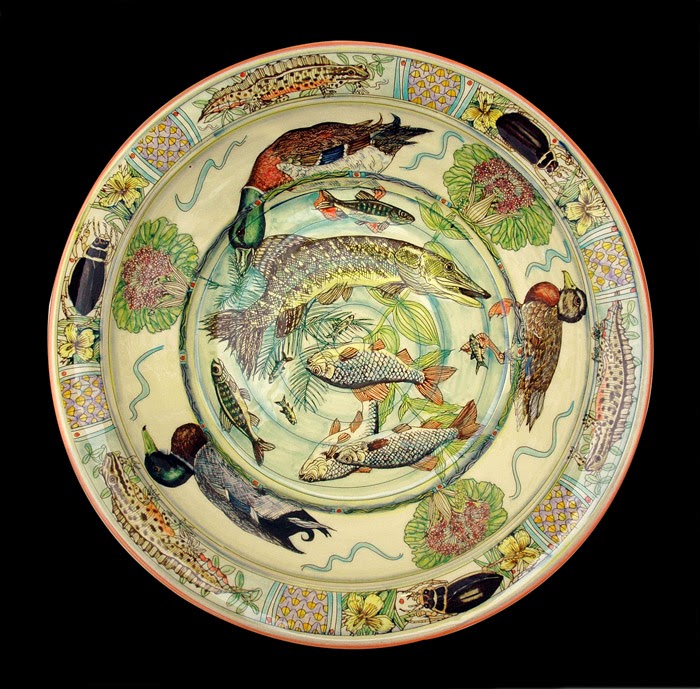 She explained something that I understand and can relate to very well.
" some people haven't a lot of money but they would still like to have one of my pots,
so they are made with them in mind".

How many artists would do such a thing?
I can assure you that a simple mug by Maureen is a thing of beauty and is the result of many hours
of labour.
These pieces are as important to her as the "statement" works that appear at auctions. 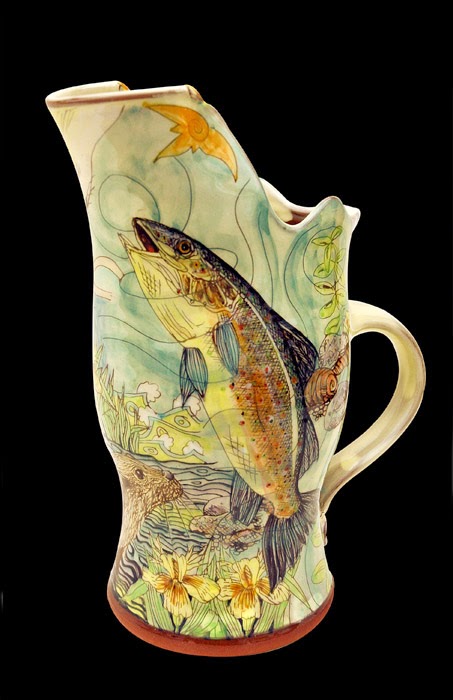 So, perhaps you understand why I am a fan myself.
Not only is the work different and outstanding,
but also the artist.

I know that she would be embarrassed to hear me say such a thing, she isn't striving for recognition
of any kind, she is just doing what she loves.
That love is evident in her work.

Her art is constantly evolving and improves in the most subtle of ways,
But really the only things that have changed over the years are the animals that she portrays.

I know that she will use the excuse of exhibiting with us to sneak some Hares back into her work.
"You must have some Suffolk Hares", she told me in the past. 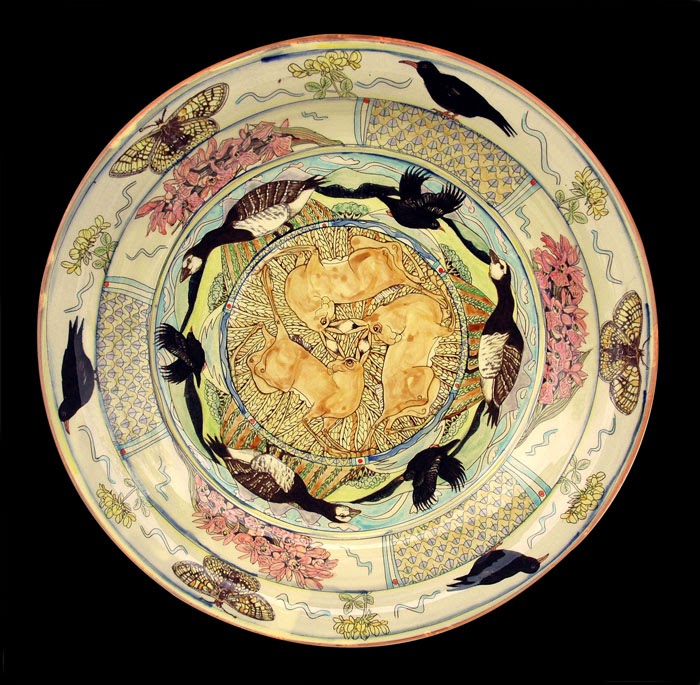 She lives in an idyllic location but in a very humble way.
Whenever I speak with her I close my eyes and ask "how is the weather"?
[Trying to visualise her her location]
Sometimes [at odd times of the year] really hot
but on other occasions I will be told that the tiles are lifting off the roof and the wind is terrible. 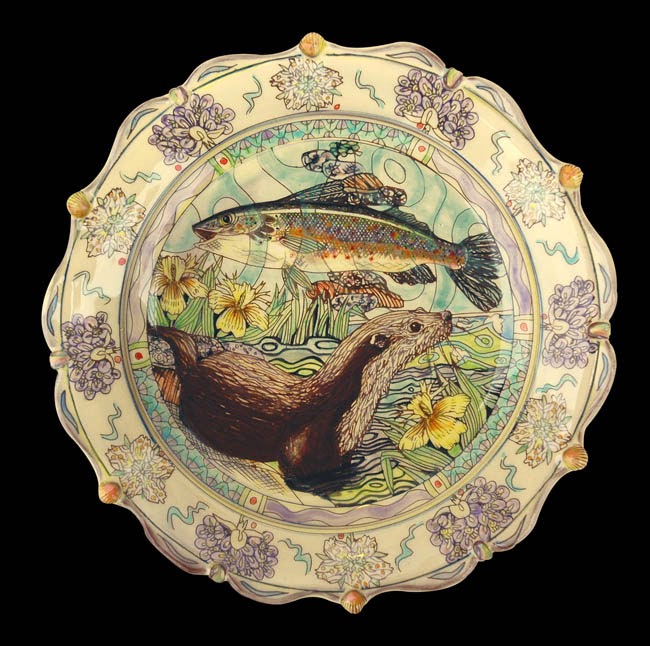 That I can easily imagine.
Although she is situated just 100 metres from an idyllic beach with views out to the distant islands
there is nothing to stop the winds from the Atlantic
[well you could say that America blocks some of it but that is a "wee" way off].

The last time I visited it was after a long journey through snow covered mountains and it was a surprise
to arrive on a winter's day which seemed like summer on her small peninsula.
But still the sense of remoteness was very evident.

Of course she is never "cut off" from civilisation because just along the road
is the means to contact the world [if you have enough coins].

I can imagine conversations like
"Maureen your breaking up, is there a storm"?
"No, I just put in my last 10p and it's running out....beep....beeep". 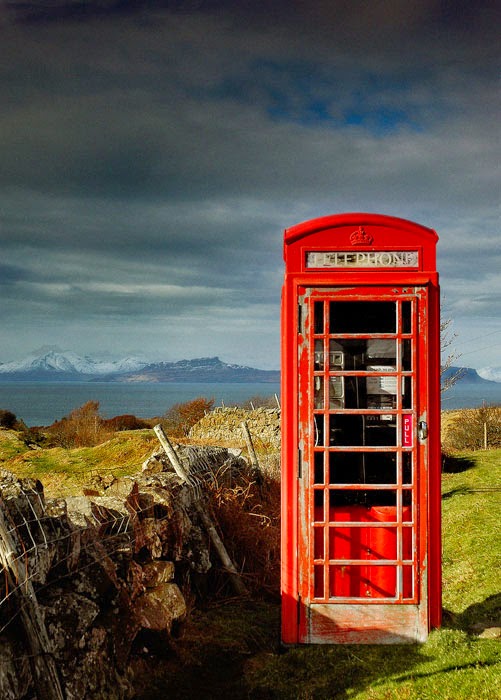 So just to confirm for those who keep asking.

Unless there is a storm from the Atlantic.
Posted by imagine at 10:16 5 comments: 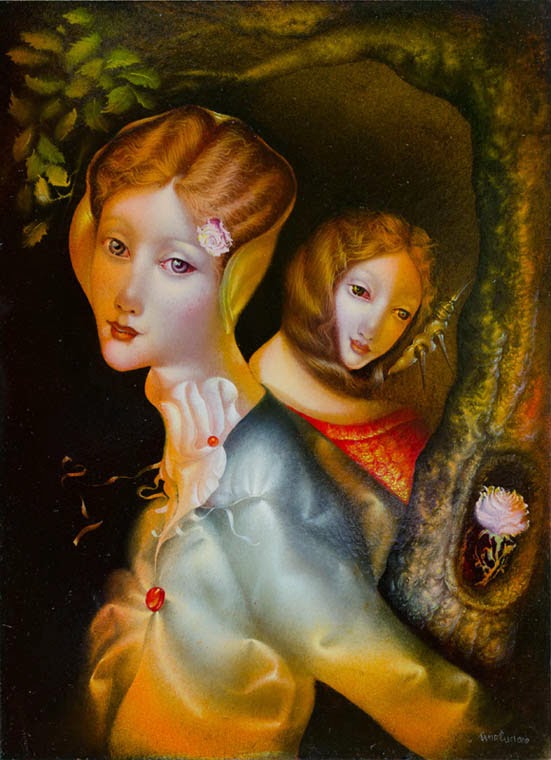 The longer you leave it the harder it gets.
I suppose it counts for everything in life, it certainly does for my 'blogs'.
Each and every day I think to myself "I must write about something", not for you but for myself.
I don't pretend that people are waiting on my every word so when I do write it is for "me.
Irene would tell me "that sounds about right".
My mind is like a "junk box" and every now and then it needs a good clear out.
Writing does that, then it enables me to move on a little bit.
At least I think it does.
People "blog" for different reasons and sometimes its hard to understand why.
My current favourite blogger "Tony Clenell" has started to write to his own ceramics,
as a result his posts have become much more personal and more enjoyable, of course he is mad
but in the very best way.
It is because of his daily "posts" that I decided I had better write a few words. 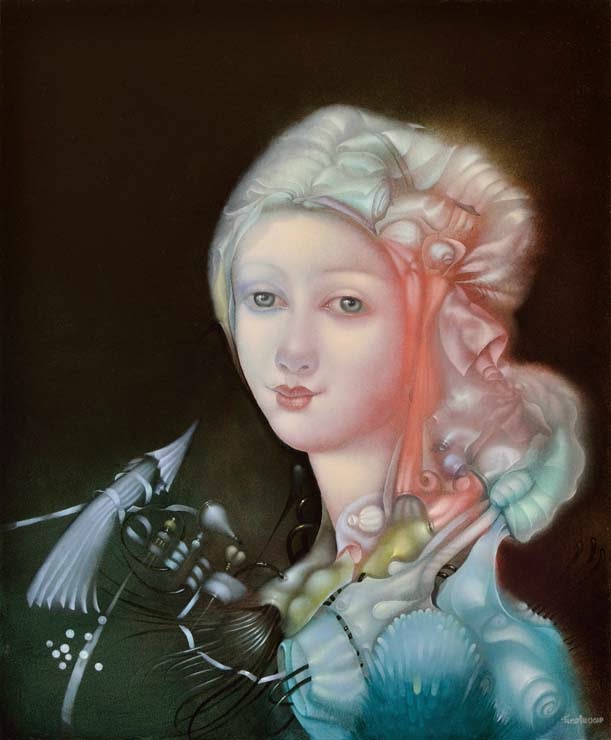 But what should I write about ?
So many events have occurred and so many different artworks have arrived at the gallery, I wasn't sure what to choose as a subject.
We certainly have a lot of events coming up in the near future, so what should I choose as a topic?
I am not sure so every day I have left it for tomorrow.
I do that with most problems but I have found that it catches up with you in time. 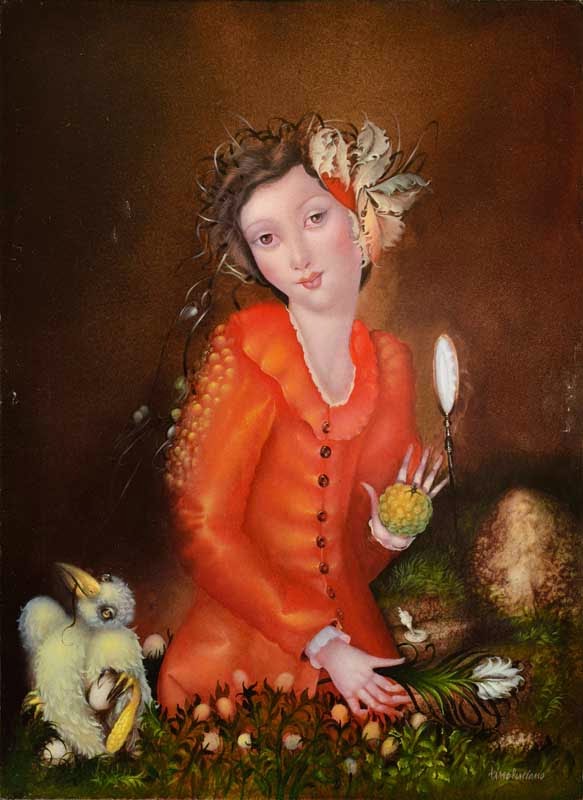 So while I have been pondering upon such important desicions
Other things, and other art and events have proceeded as normal.
Which has made me understand that these are the important things and that I should make mention of them because they are the foundations of the gallery.
Nothing to do with exhibitions. just nice artists who we deal with every day. 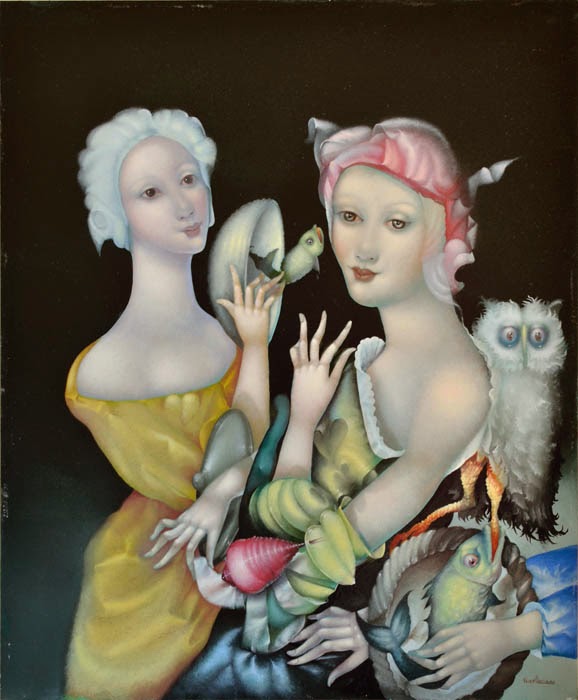 I don't remember exactly when, but a few months back I had an email from an artist.
What made this letter different was I couldn't understand a word, it was in 'Italian'.
I appreciate that this will confound a few of you, those who are aware of my vast linguistic skills.
After all last week I was speaking with a customer in "Geordie",
that just shows how good I am with a foreign language. 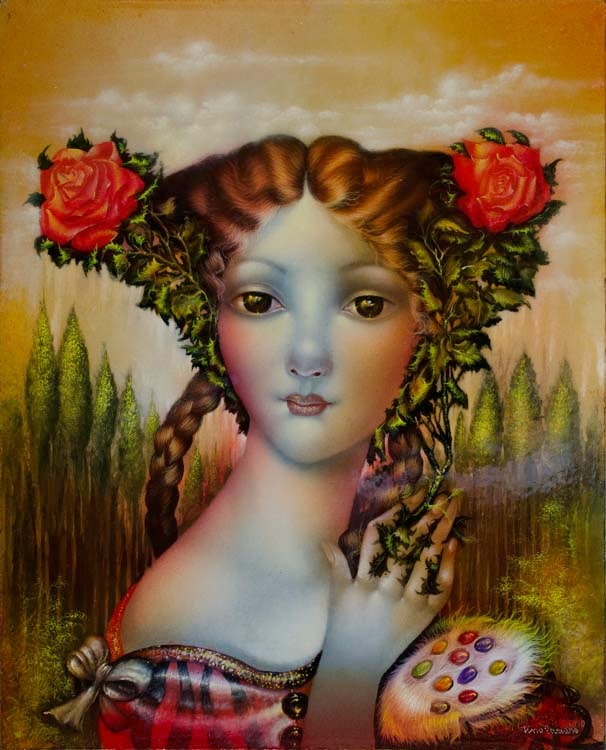 So receiving the letter in Italian I called upon my good friend "google"
and discovered that this was a famous Sicilian artist.
Famous yet so very modest. 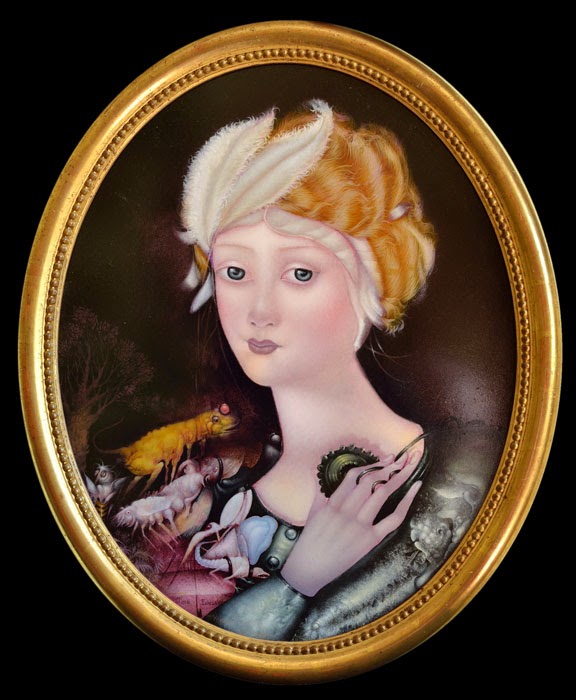 I am so pleased that 'Google' were able to translate for me as I had received such a lovely letter from a really nice and incredibly talented artist.

I have no idea how he found us but I am so happy that he had.
As a result [I did reply in Italian] of our correspondence he sent me two of his beautiful paintings
Both placed in antique frames.
I couldn't help but wonder what I had ever done to be so very fortunate. 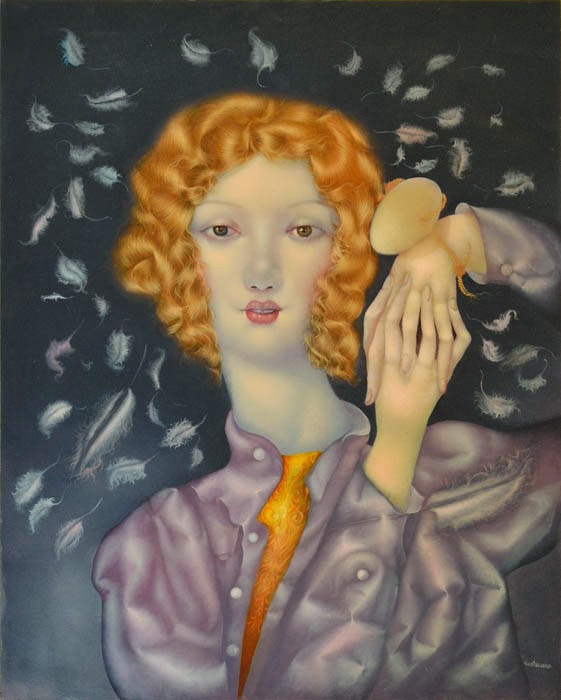 Then just a few days ago he wrote again.
Of course I couldn't understand a word, but with a little help again from my friends at google
[but they don't know Geordie]
I understood that he was preparing to send me some new paintings.

I felt very humble and just don't know how I have become so lucky, I don't want to question why
I am just so proud that he would decide upon us to be his gallery in England.

What was even nicer isthe way he signed off his letter
Saluti affettuosi, a presto
"much love, see you soon"

What English person would be so honest plain and simple?
I can't wait to greet him with a kiss.

So, if you want to see some stunning art from Sicily give me a call, you won't find it elsewhere,
not in my country.