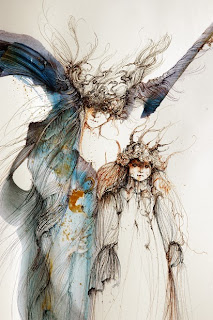 Sometimes, when artworks arrive at the gallery it not only gives a feeling of great pleasure but also a feeling of great relief.
On occasions there are pieces of work that I want to show so much it almost hurts,
the result of this is that I am in a state of panic and disbelief until the courier eventually walks through the door carrying boxes that contain my dreams and hopes.
I always have a feeling of immense relief and a sense of even greater achievement.
That some of these artists feel a connection with the gallery and allow me to exhibit their art is a constant source of wonder, perhaps one I shouldn't analyse too much but should just be thankful for. 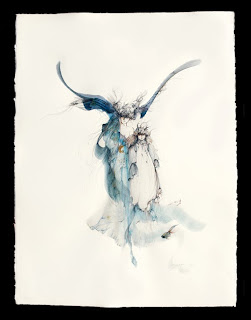 I have always believed and in fact my mantra has become "the greater the artist the smaller the ego",
and often the more likely to let you show their work.
We have been fortunate to have shown some really great artists in the past, the sort of artist that you would only expect to find in a city like Paris, London or New York, and in fact that is where most of them do exhibit, so it is a constant source of amazement that artists of that calibre will take a chance with our gallery which is set in the countryside.

So, I now want to show you the art of two of my favourite artists.
It sounds a terrible thing to say favourite but it is true, they are two women whose work gives me lots of pleasure and has me looking at it wondering "just how did she think of that"?
They are pieces that I would love to own, I accept that I never will but at least for a while they are mine to enjoy and I can pretend to myself that they belong to me. 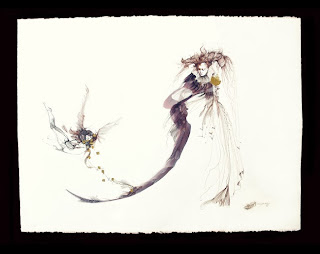 The French artist Anne Bachelier [whose pen and ink drawings are shown] is someone whose work I really admire, in fact that is an understatement, I love it.
For about a year or so she has allowed us to show some of her paintings but her drawings and
'Pen & Inks' I had never seen "in the flesh" although they have captivated me for a long while. 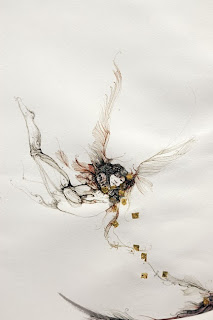 About a month ago she returned from a trip to America where she had attended the opening of two solo exhibitions of her work, one in New York and the other in New Orleans.
Looking at the photographs that she had taken at these events was awe inspiring.
The scale of the exhibitions and the locations that they were held in worried me a little.
If I had any doubts before [which I never have] I was now aware that this was an international artist of great repute, so to understand that she allowed us to show her work gave me a "glow" inside.

On her return home she contacted me and asked would I like some fresh paintings.
"Yes Please."
Also she asked would I be interested in showing one of her Pen & Ink drawings?
This had me really excited, I really did want to have one of these on the walls.
Anne sent me photographs of five drawings to choose from, which was an impossible task as I desired them all, so I asked Irene to choose for me.
Of course she had the same Dilemma, we both loved them all.
Why did I ever worry?
In typical fashion Anne sent us all of them,
They are beautiful and I am getting a lot of satisfaction seeing them on "our" walls 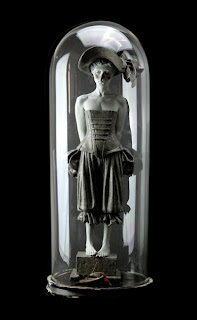 If this wasn't enough to make me happy, there was more to come.

A short while ago I had the great fortune to "stumble" across an incredible sculptor.
On consideration I would say that she is one of the best sculptors that I have ever encountered,
I can think of only two others whose work I find equally as beautiful. 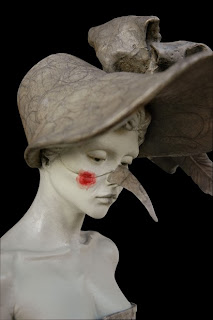 Seeing images of her work I became obsessed and knew that I would have no peace until something of her art was here in our gallery on display.
Of course, every other gallery was thinking the same as me, one of them really well known and very established, plus based in London.
I couldn't see how it would ever be possible to persuade her to take a chance with us, but as I mentioned before the "greater the artist the smaller the ego" and usually the nicer the person.
So armed only with determination and love of her work I set out to persuade this great artist to allow us to show her work in front of the other galleries. 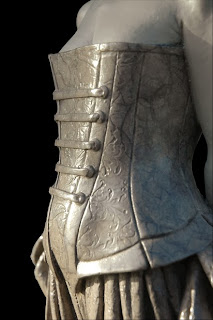 It wasn't easy, but maybe it was when I told her that she would be responsible for making an old man cry if she didn't that finally persuaded her.
So to my delight and even greater relief Rachel did agree to letting us show some of her work at our
Christmas exhibition.
I could breath again, but I still wouldn't rest until it actually arrived.
It did. 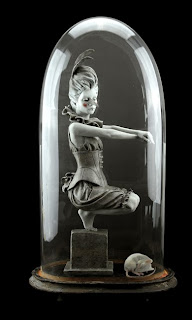 Rachel is a sculptor, and the wife of a sculptor, but she is unlike any I have ever come across before.
I am not a gambling man but if I were I would gamble that this young woman is going to be really great, in fact I would guarantee it.
The quality of her work speaks for itself in so many ways.
The skill and also the narrative behind behind each piece, they are delicate and gentle, also made of bronze, which so far not many visitors have recognised.
They are cased in antique Victorian domes which work so well with the pieces,
perhaps this is because they were intended to be so encased.
These are an investment for any art lover.
I love these sculptures so much it almost hurts, I wanted to show them so much and I know that I will miss them like no other when they eventually leave us. 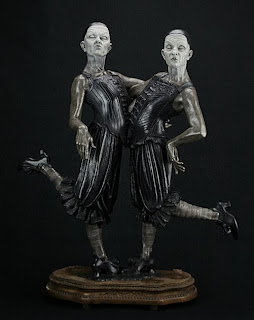 Two great artists working in different mediums, yet both creating work that moves the heart
and the soul.
I hope that you will agree that they are an excellent pairing.
It doesn't really matter if you don't as I think that they are, and having their combined work here
does genuinely give me a sense of pride.
Posted by imagine at 06:12 4 comments:

On a Different Note 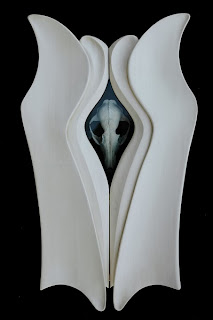 The last post wasn't meant to be the "final note", although it almost became it.
Like everyone I have much going on in my life, plus I have the added pressure of running a gallery.
Which of course means having to deal with many sensitive souls both artist's and buyers.
As a result, now very little of my time seems to be my own anymore, I seem to be caught up between the 'Devil and the Deep Blue Sea' and spend most of my time trying to arrange a marriage between the two.
Of course this is the same for any gallery and is indeed part of the fun of living this kind of life,
but sometimes, just sometimes, it all gets a bit too much to put up with. 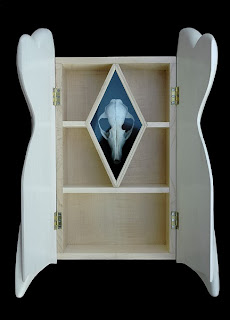 It is on these occasions that I remind myself to
"just focus on the art"
The rest all seems to be politics and office work, just the same as any 'real' job.
So, as a result I now spend a few minutes each evening wandering around the gallery just taking to time to enjoy and appreciate the various work we have on display. 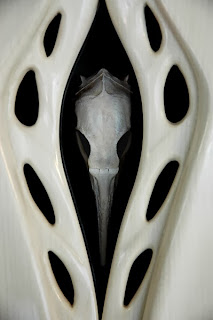 I often find myself thinking
"Wow! how did I manage to persuade this person to take a chance with us?"
I am often amazed and slightly humbled to understand and appreciate the achievement of being able to show such beautiful works.
But of course often that is only my opinion, and what does that really count for?
It seems and is obvious that everyone has there own perspective on what is "Real Art". 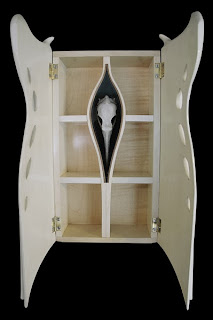 For example I had a woman ask me last week
"This painting, what medium is it painted in"?
It is an oil painting. I told her
"Oh! I like it but I think that with a real oil painting you should be able to see the paint raised from the surface, so you can touch it."
I was 'gobsmacked', it was a case of never mind the quality, feel the thickness of the paint.
What does it matter, that is what art is about, it is different for everyone. 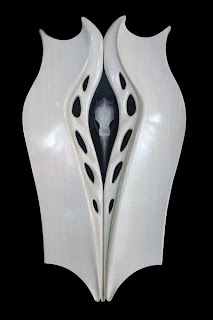 So as a result, as you may have noticed in the past I go against the flow and just show the art that moves me, if I didn't do this then it would make the whole purpose of running a gallery pointless.

Although it does surprise me at times that I have an artist ask me "why do you show that"?
It would seem that even some artist's can not see beyond their own style of work.
But that is what having a gallery is all about, you try to show the best of everything,
some people like it some don't.
Myself I only have one criteria, it has to move me, if not then why show it? 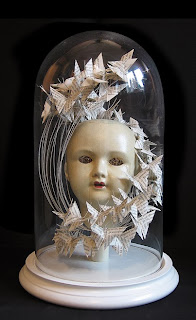 In that respect I have been really lucky over the past two months, I have been really fortunate to come across the work of many different artists whose work I have found to be really well crafted plus also really moving.
Two examples being the artist's that I am showing to you.
Both very different, as people and in the mediums that they are creating from, but both really gifted,
plus both without a trace of an ego, of any kind.
They are just creating objects of unusual beauty because they have to, or what I suppose I mean is because they can't help themselves. 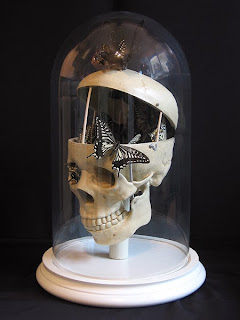 Both of them can give fantastic descriptions of their art and the stories behind them, but neither can explain why they need to create them
For me there never needs to be a reason other than the creation of beauty.
But, it would seem that to others there should be a very sound explanation.
Both the featured artists have attracted more comments, praise and complaints than any others we have shown.
For us as gallery owners this is as good as it can get.
Anything that can provoke people to take an interest in a work to the point that they feel that they must talk to us about it is really good, it means that people have been moved in some way. 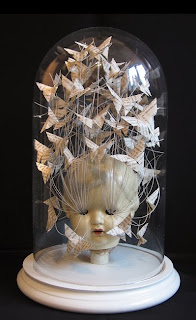 There have been negative remarks made about their work but in honesty most of the comments have been really positive, and both the artist have received deserved sales which has really pleased me.
They were both artists that I yearned to exhibit, so on the occasion of their visits to the gallery I was tempted to run out into the storeroom and do a little dance of joy.
Of course I didn't, because as I know you understand I am a very serious person and as such would never give way to such emotions.

Yeah Right!
I was thrilled to bits to be exhibiting work by Lynne De Sade and James Evans.
Two incredible artists, plus being two lovely grounded people, both taking their work seriously yet both with great modesty.
It is a genuine pleasure to work with such people and the fact that their work arouses so many emotions in different people is an added bonus I had never anticipated.

Looking in a shop window how often are we moved?
Not often.