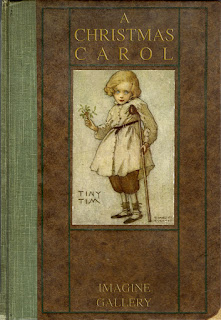 Our Christmas exhibition opened a couple of weeks ago but until today I haven't shown any of the
Varied art pieces that have arrived.
The exception being the amazing "Pop-Up" book by Anne Bachelier.
Which really has to be seen to be appreciated, if only it wasn't a "one of a kind" we could all enjoy
owning a copy.

As the cover of the invitation [shown above] suggests the exhibition is titled
A Christmas Carol.
It would have been great to have every exhibit centred upon the old novel
But in reality this was an exhibition that was open to interpretation by the various artist involved.
To my delight everything received captured a little of the innocence and magic of Christmas. 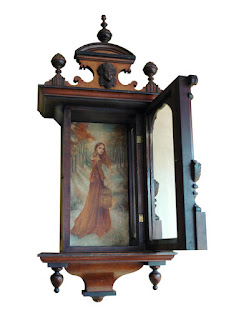 'Nom', the artist we recently exhibited went out of her way to create something with a nostalgic feeling.
She also created it in little time and under great pressure.
I had asked her if she could create something really special for the exhibition,
I knew she could and would,
But with the needs of a little girl and a new baby to care for I think that her attention was focused
on many other things and she was forgetting how close Christmas was becoming.

She gave me a call telling me that she had purchased an antique clock case to be the frame
for her Christmas painting. "What do you think", she asked?
"Fantastic, just the sort of thing I have been wishing for, but have you enough time?
When does the exhibition start?
In a weeks time.
Oh! I had better stop talking and get painting".

One week later, and two hours before the opening Nom arrived with her finished painting.
I think it is easy to see why I like her so much.

Even better she arrived with her husband
The illustrator 'Adam Oehler'.
Adam had also produced two artworks for the exhibition.
Both in his very unique and innocent style. Which seems strange as he had just finished animation work
on a video for the "Heavy Metal" band Metallica, which was far from innocent.
His personal work is always innocent [and very collected], and I don't think it will be long before we are all owning a copy of his new book. 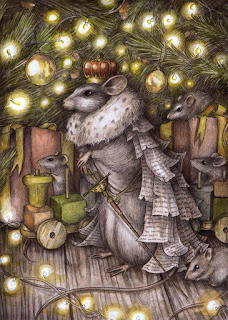 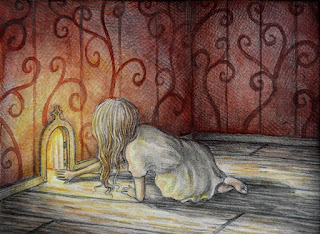 I have been yearning for the sculptures of a very modest sculptor for some time.
Sometimes, although it is frustrating the wait is all worthwhile, and so it was with "Barry".
A very modest [extremely so] sculptor who had worked for the British Museum of Natural History.
His own personal work covers many different styles and interests.
From detailed wildlife sculptures to his beautiful recreations from Alice in Wonderland.
It was these that he drove for hours to deliver to us.
'The Walrus and The Carpenter'.
Both sculptural recreations of the illustrations by John Tenniel featured in the original version of the famous book.
They are "smoked fired" to replicate the "black and white" quality of the drawings.
The Carpenter is even "shedding a bitter tear" and at both their feet are the Oysters that they eat.

The man is a genius and I really hope to exhibit more of his work next year. 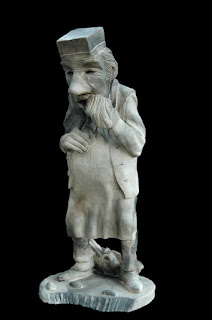 Something totally different is a cabinet which is a collaboration.
The cabinet made by myself many years ago from reclaimed Elm floorboards.
It has been put aside for decades, I don't know why really but I never thought it was complete.
This year I discovered the perfect artist to complete, transform and improve the object.
Despite the fact that it would be weeks of work at the wrong time of the year a wonderful woman
"Jo Anne" undertook to finish the cabinet for me.
I feel that her input was perhaps greater than my own, however I now look at the finished piece
With the feeling that it is at last perfect.
Inside is another piece of her art, to see that you will need to visit the gallery.
It is titled 'Sleeping Beauty" cabinet. 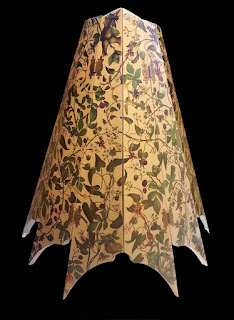 After another long wait [months], at last the first of the highly unusual sculptures and paintings
arrived from another artist that I admire, Jill Desbo.
Some of her creations very serious others not so, but all with a large amount of imagination and work devoted to their creation.
One of my personal favourites is this sculpture/puppet titled
"Mrs Thackeray's Theatre".
Her dress [stage curtains] part to reveal the audience inside watching the performance.
With rods her hands can clap and her head will turn.
Although it's hard to see, a bird nest complete with chicks perches upon her sheep s wool hair,
But I don't think Mrs Thackeray has noticed [she doesn't wash it often].
What all of them are watching I do not know, but perhaps it is a performance by another of Jill's puppets.
We have them all. 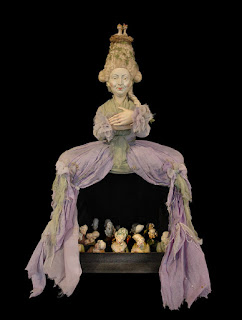 An artist who did a special painting directly related to the title is Jane Ford.
"The Poor of the Parish". is the title.
I think that it is perhaps not what Dickens was thinking of when he wrote the book
But for Jane it is a version of her Wild Life adapted to fit the theme of the exhibition.
It is certainly innocent.

But when it comes to childish innocence I could exhibit nothing better than 'Wind in the Willows'.
Or at least this fantastic creation of Ratty's home by the riverside.
I have tried many, many, many times to take a photograph of this sculpture.
None of them work, or show the true detail so I will have to describe it instead.

Built inside a Victorian cabinet with glass doors is a perfect miniature cottage, Ratty's cottage.
Complete with water and a jetty where Ratty is sitting beside his boat fishing [with fish in his basket].
It is a night time scene, the moon [illuminated in the sky] reflects upon the water.
Inside the cottage "Mole" is asleep next to a jar of cider, the fire is alight and windows illuminated.
The attention to detail is beyond belief, bottles, jars and box's sit upon shelves.
Washing hangs from lines and candles sit in lamps, probably to help when climbing the stairs.

Obviously Ratty is a creature of thought as outside on the jetty is a telescope aimed at the moon, but this is nestled amongst baskets rubbish and flotsam he has collected.

At the base of the cabinet [beneath the cottage] is a drawer.
Opening this reveals a limited edition of 'Wind in the Willows'.
The whole piece of art is a total "one of a kind" there will never be another. It is a creation that makes me feel like a young boy each time I look at it.

Of course it sold instantly, but fortunately the buyer has let us retain it for two weeks, so it is giving pleasure to many visitors who think like me, children disguised as adults.
I will be sorry to see it leave the gallery as I will never see its like again, but at least for a short time it has been mine. 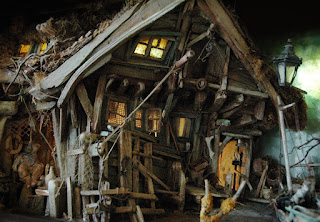 Thinking of the magic and innocence of such a piece I wanted to share it with someone.
I couldn't think of anyone better than my friend and artist Rachel.
A self confessed "Peter Pan" [I have never grown up] I just knew she would love it.
She did.
As a result the day before the exhibition opened I received her own piece of art inspired by the book.
BADGER
Her version of the old and wise Badger, beautiful in detail and cast in Bronze.
I love him. 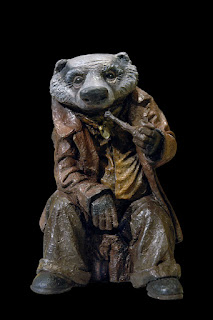 Perhaps Rachel is not alone as being a Peter Pan
There is a part of us that never grows up, in this bad world sometimes we all want to hide our eyes
and make the bad things go away.
This is what I wanted this exhibition to speak of.
Innocence and childhood.