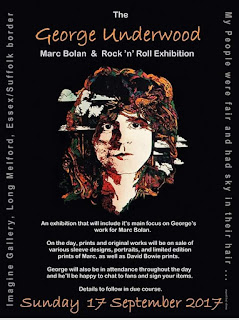 Will I ever write on my Blog again?
I have been asking myself this question for a very long time. Since I last posted the world seems to have changed a great deal, and to say that events have left me angry and frustrated would be an understatement.
So to write about myself and the gallery seemed a very shallow thing to do when there is so many important and life changing events happening everywhere.

On consideration, I realized that the whole purpose of my Blog was just to talk about events that happen in my life and a art gallery in a rural part of England.

Whoops! I nearly went off on one then with the word "England".
Now, back to reality and really important events.
My events. 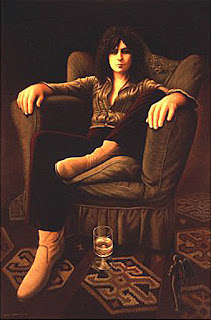 Early last year we held a fantastic exhibition by the artist George Underwood.
Perhaps you may remember that George had been David Bowie's lifelong friend from the age of nine.
There friendship and adventures together have been well documented, and of course George's paintings of his friend have been exhibited worldwide, plus also at our gallery.
At the conclusion of our solo exhibition with George my thoughts were
"That was great fun, I wish we could do it again".

Of course we always have a selection of his art on display in the gallery but I wanted to repeat the fun and excitement of holding a special solo exhibition with him.
The response from the public had been fantastic, to the extent we even held a "closing day" event,
this was a first for us and was held so that his fans had a chance to have a "one on one"
conversation with him, although that didn't happen as he gathered everyone around him and it turned into a group session/interview which was loved by everyone.
As I walked around the gallery dealing with everyday customers I could hear in the background laughter and applause.
"What am I missing"? I wondered.
That evening it was all recounted for me by George, his wife and Irene.
What a day, what an exhibition. How I would like to experience it again. 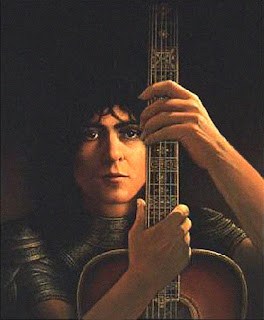 A few days later the opportunity for such a unique event presented itself.

In his long career and also from his friendship with David Bowie George has met and painted portraits and album covers for many famous musicians.
Some were created for his own private collection but many were used by the artists.
One such artist/musician was the "late" Marc Bolan.
An incredible musician who tragically died far too young and at the height of his musical career.

He has left behind a giant fan base and even inspired the now famous tribute band, "T.Rextasy".
A tribute to the name of his own first band "Tyannosaurus Rex".
T. Rex as it became known.
The singer and founder of the tribute band is a lovely man name Danielz.

Because of the exhibition with George Underwood, Danielz came to the gallery and left me with the cover of an early Marc Bolan album [created by George[ which George had promised to sign for him. 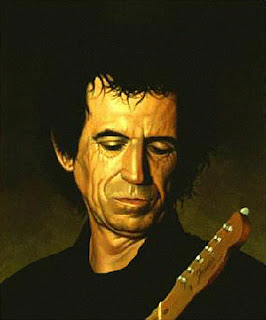 A few weeks later Danielz returned to collect the signed cover.
By this time I had given much thought to a "follow up" to the Underwood exhibition.
So, in conversation with this charming musician/artist/singer I asked "did he play acoustic"?

"What an idiot", he must have thought.

He explained that the band had just done a fully acoustic Gig in the nearby town 5 miles away.
In fact with his band they intersperse full sessions with "unplugged" gigs.
Which makes perfect sense as much of Marc Bolan's earlier work was acoustic folk music. 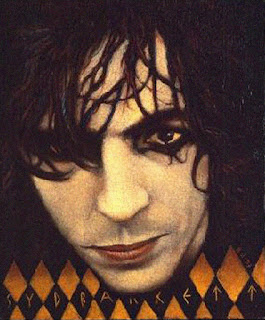 So, to cut a very, very long story short.
We will be holding a solo exhibition by George Underwood this September.
It will be an exhibition with a difference, it will consist of all of his music portraits and album covers,
Some for sale, some on loan from his collection, but with new paintings and many Limited Editions
created especially for the exhibition. 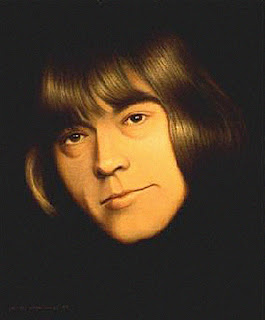 The main focus of the exhibition will be his art of Marc Bolan.

On the 40th anniversary of his death our exhibition opens, and to mark this very special event
Danielz and his drummer John Skelton will be here in the gallery to play an acoustic session in tribute to the late musician.
The music of Marc Bolan will be played in front of a background of paintings by George.
It will be unlike any event we have done before, and I expect ever again.
I think the term is "once in a lifetime". 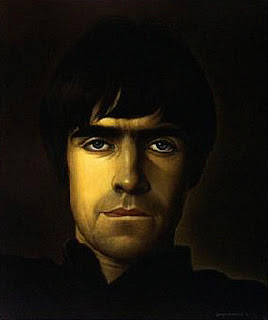 There is a great deal of planning to be done, idea's are growing as I write.
Even today a visitor asked will you hold an "Evening with George Underwood" the night before?
Wow! Now that's an idea.
Anyway at the end of this month all parties are meeting to discuss the growing plans so I will keep you "posted".
I confess I am scared as I think that the event will be "BIG". 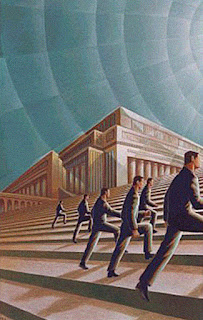 I had not intended to talk about this for another couple of months or so, but as people have started to call/email asking for "ticket" availability I have started to become really focused.

Of course we will be holding some lovely exhibitions before this date, but in terms of planning
they will almost seem a "walk in the park".
This does not mean they are any less important or be treated less seriously but the logistics will be more what we are used to.
Because of this I am looking forward to them with greater pleasure. 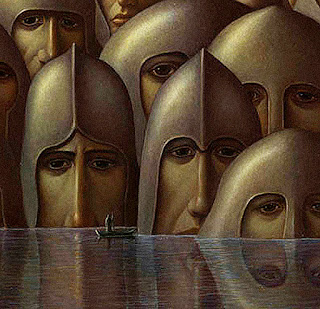 So, if you are a music fan and have a free day in September.
Get in touch soon.

Of course what is shown above is just a small selection of George's music portraits and album covers,
a very small sample of what to expect.

The exception is the first image, which is of a poster produced be Danielz which is available at
his many Gigs.
At the moment he is playing around the country almost every night, his only days off are when he is traveling to the next venue.
Check his website [we are listed as a "unplugged" Gig].

I am glad that I did write again.
As I was writing I could visualize how the event might unfold and look and I have become very excited.
So, tonight I will not return home and watch the news on TV,
I am in a much happier place.
Posted by imagine at 12:32 1 comment: