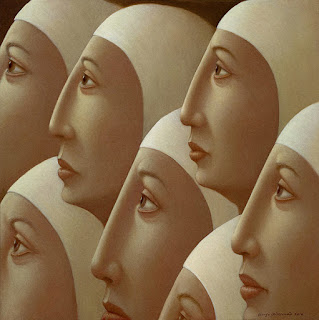 We have never had an exhibition that has generated as much media attention as the forthcoming one.
The artist involved is George Underwood.

Always in the gallery there is a selection of his art on display, paintings and prints.
The prints are Limited Editions but we only show the 'Artist Proofs' which are more rare.
Over the period of a few years he has become one of our most collected artists.
For this reason only we have never held an exhibition of his work. 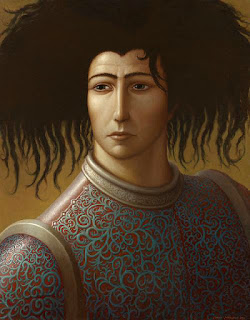 My feelings have been that the public would not notice the difference between
an exhibition and a normal display.
I have often been urged by people " you should hold a solo exhibition by George ".
Now we are.
The decision to do this came by chance and circumstance.

Just a few months ago a famous musician visited the gallery, he was fascinated by one large painting,
Of course the painting was by George Underwood.
On that day I was not at the gallery, my daughter was in charge of my little empire for the day.
In conversation with her the musician explained that he and George were very old friends
In fact his best selling album featured Mrs. Underwood on the Cover. 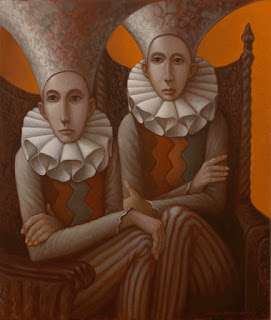 Of course I was greatly disappointed that I was not present that day as I had missed the opportunity to meet a hero.
However, I did have A vinyl copy the album featuring George's wife and as I was anticipating them both to visit the gallery sometime soon I took the record to the gallery with the intention of getting her to sign it when they visited.

Two days later a gentleman came into the gallery who was interested in only one painting.
A George Underwood painting.
I said "hello" to him then I did a "double take".

"Hey, it's you!
Don't you go anywhere before you sign this".
As you can tell I have a way with words and famous people.
He ignored my rudeness and we had a long conversation [plus he did sign the album cover].
He explained that he hadn't seen George and his wife for many years, but now he was
determined to make contact with them again. 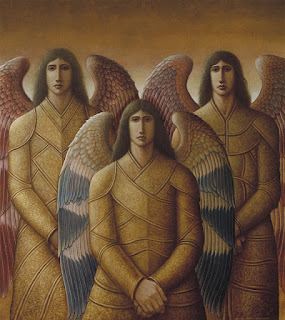 Two days later I had a call from George.
"I understand you had a visit from an old mate of mine".
The musician had contacted George and had invited him and his wife to come to see him
on his latest tour.

Joking with George I said "we should have a solo exhibition of your art and get him to come and open it, and maybe sing a song".
We laughed about it, then on the spur of the moment I said
"shall we do it"?
"Are you serious" he said? 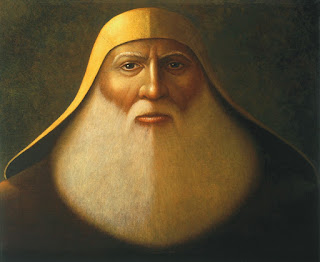 As a result on April 3rd. That is just what we are doing.
We have both been looking forward to the event and George has been [and still is] busy
creating new paintings, it seems that there will be a lot of previously unseen artwork on display here. 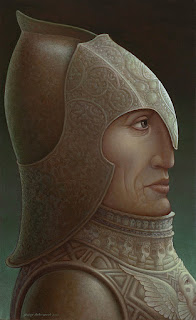 George Underwood has a great many famous friends in the music industry,
One of these was his best friend, David Bowie.

People worldwide had been shocked to learn of the death of this iconic figure.
None more so than George.
This was his mate who had passed away, the boy that he had grown up with, the boy he had fought with over the attentions of a girl, the boy who he formed a group with.
The boy who became the man who then became 'Ziggy Stardust' and who he later toured America with.
The person he stayed friends with until the end. 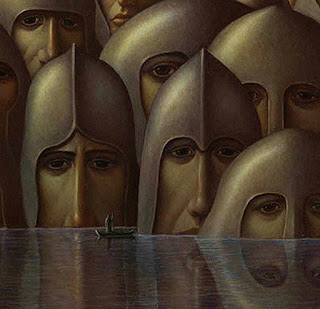 Although David Bowie owned a large collection of his paintings
George Underwood had never used his best friends fame to further his own career.
In fact he would rarely speak about their relationship they were just mates. 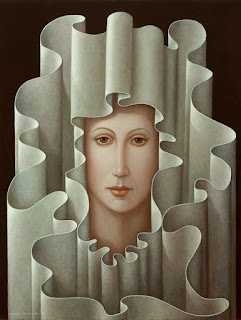 With our coming exhibition this has presented the media with the ideal opportunity to interview
Bowie's oldest friend.
The first of these interview's will be published
This Sunday in one of the country's most important newspapers
THE OBSERVER

After that in the week building up to the opening there will be many other interviews.
Newspapers, magazines, radio, television and social media.

Yes, they will be asking for stories about David but the emphasis will be on the paintings by
George Underwood. 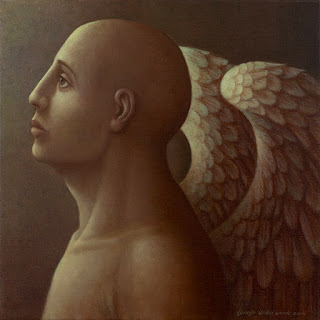 I think you can see why that should be. 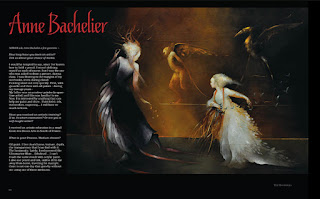 Sometimes it is nice to be taken by surprise.
Not always, but sometimes. This is about one of those occasions.
There is an international art magazine titled 'MIROIR'.
They have a reputation of  showcasing some of the worlds best artwork. 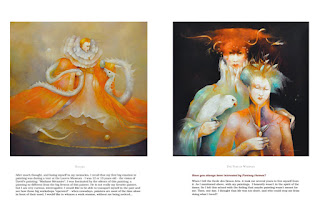 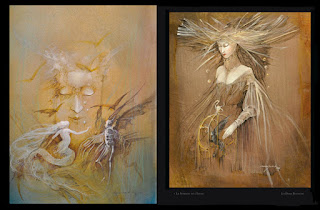 I was told by a friend that I would really appreciate the latest issue as it featured somebody I know.

The magazine can be viewed online so of course that's what I did first before buying one.
It might not be as enjoyable but sometimes the immediacy of viewing online
can be irresistible [especially when it's free]. 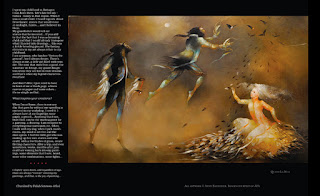 I wasn't sure what I was expecting to find but I knew that it would be good.
It is always nice to read about people that you know.
On this occasion I was even more pleased and excited as the magazine had a very large article
featuring one of Imagine Gallery's very best artists
Anne Bachelier 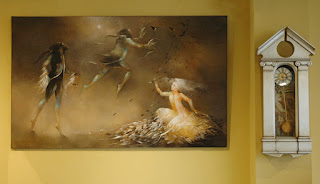 For the very first time I learnt things about Anne that I had no knowledge of.
My only excuse for not having asked her the same questions as the magazine is,
I feel art is a very personal thing and sometimes it is best not to know too much.
The magic might vanish.
I have thought that it is good to weave your own story around an artwork.
Now I understand that I am an idiot.
I learned so much from the article and it gave me a greater understanding of her inspirations.
As a result I love her paintings more.
I am only showing a fraction of the interview and the pages published,
I would urge everyone to purchase a copy or at least like me read the magazine online. 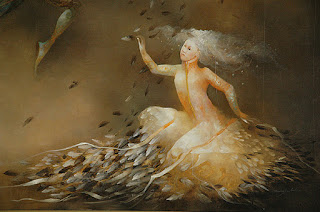 What made the feature really special for me was that on the last double page spread
they featured a painting that I see each day here in the gallery.
"Wow" that's our painting.
It was so strange to see something that I look at, touch and admire each day
now being shared with the world. 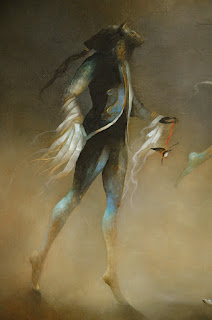 It is a wonderful painting, the longer you view it the more detail you find.
Like much of the art we show I will miss it when it sells
So while it is still "mine" I thought I would show how it looks in our setting.

It is a strange painting which seems to change.
Wherever I place it in the gallery the light seems to change the colouring.
I look at the image in the magazine and think "yes that is just what it looks like" then I think
"No, it is much softer, more gentle".
Moving it again into a different room it then becomes darker and more menacing
The story changes
Whatever,
It is a stunning painting and for a little time it is mine
That makes me feel proud.