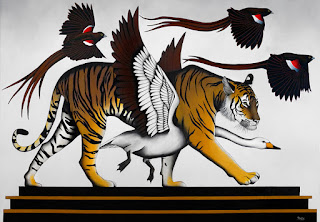 A couple of months ago I unlocked the door of the gallery and as usual looked to the floor.
Not because the floor is interesting, but because there is usually a pile of envelopes
waiting to trip me [in many different ways] as I enter.
Usually nothing more exciting than bills, although these may not be exciting they do sometimes make my heart beat faster.
These I place immediately into the "pending" tray,
Some people call it a "trash can", I call it my pending tray.
However
On occasions there will be an envelope that will change my day, my week, my future.
This was one such day. 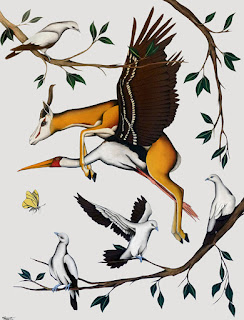 On the doormat was a small package.
My first thoughts were "great some new picture frame samples"
Which does give an indication of how little it takes to excite me nowadays,
But I confess they do excite me as I often have paintings awaiting a frame, but I won't frame them unless the "moulding" compliments the painting, so I am always pleased to a packet containing small
pieces of wood.
I do get more excited when there is a cheque in the post,
But sometimes you just have to take the highs with the lows, so a piece of wood is fine,
at least it starts the day with a "kick start" for my imagination.

But this day was a lot better.
The post mark was from France, which had me excited by itself.
The package contained a few photographs, a CD and a letter from someone named
CHARLY 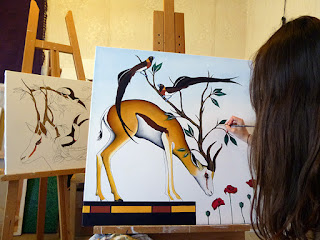 A letter from France?
Clearly my linguistic skills were needed, so with the aid of a dictionary I quickly interpreted the letter.
It will come as no surprise to you that this was very easy for me

It was written in English [I needed the dictionary just to check for spelling mistakes].

The package was from a French artist.
The CD contained photographs of paintings and the letter told me a little about the artist.
'Charly' is a woman and she asked would I like to try some of her paintings in the gallery?
Two minutes later I was on the telephone.
" Parlez vous anglais"?

This was good because otherwise the conversation was not going to progress very far.
Because Dear reader I confess that I have lied to you.
I can only speak English, Cornish, Scottish, Welsh and a little bit of Geordie.
And then only if they all speak slowly and clearly.
But obviously I have a way with languages as all of the French artists can understand what I say.

Our conversation continued in perfect English, and it was agreed that Charly would make a visit to Long Melford to bring some of her paintings.

I confess that I find it very strange when you are speaking with someone and you are building a friendship but at the same time you have no idea what that person looks like.
It is not important but it makes it easier somehow.
I searched for images of Charly but all that were available were taken from behind her.
My imagination filled the big gaps.
It is strange how often this actually works, it seems that the appearance of people can match their personality.
As a result, it makes for a much more relaxed "first" meeting. 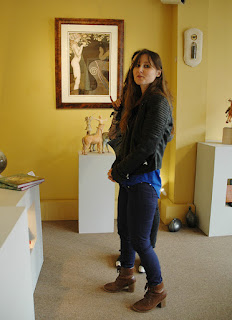 So it was that six weeks later I was in a local hotel asking "when would Mademoiselle Charly arrive".
From behind me a voice asked
"Mr.Foley"?
I turned around and there was the woman I had anticipated.
She has persisted in calling me Mr Foley despite the fact that I have told her my name is John.
I guess it must be an age thing.
Every time I hear "Mr" I feel another ten years older.

So, here at last was Charly at Imagine Gallery  "avec sa mere".
Mum had made the journey with her little girl.
For some strange reason she enjoyed driving on the wrong side of the road.
I recommended that she should try driving in London [a journey we are all afraid of].
But it was decided that she would have to learn to swear in fluent English before that was attempted.

We decided to visit the old historic "pub" The Bull, where we could get to talk and learn about each other.
So over plates of "fish & chips" I began to understand about the life and work of this artist.

I admit I found it hard to think of her as Charly, which of course is not her real name.
The real name sounds a lot more romantic and less English
But CHARLY it is, at least signed on the paintings. 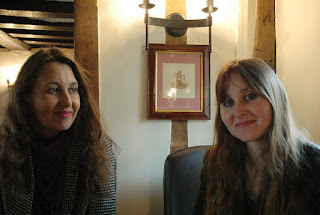 Her visit was over far too soon
[plus I haven't enough hours to tell you of it].
It seemed that just when I was beginning to know the artist it was time for her to leave.
But I suppose that over a couple of days I had more of an opportunity to get to know her
than I would have if she lived and worked here.
My relationships with "home grown" artists are usually built over a longer period,
The conversations are mostly restricted to around an hour at the most, so it was good to have a little more time to talk and to learn about the motivation and narrative behind her paintings.
I wanted to learn more about the person
But her enthuisiasm and conversations were for her art, perhaps next time I will learn more. 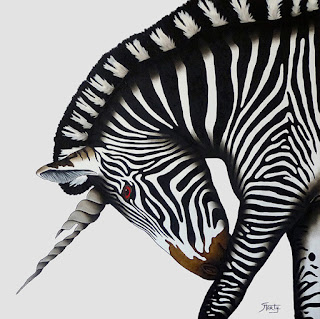 I know that this will be the start of many meetings with Charly
She has promised to visit again and next time to bring her dog, and with each visit I am sure my spoken French will improve.
Or a least her understanding of my English.