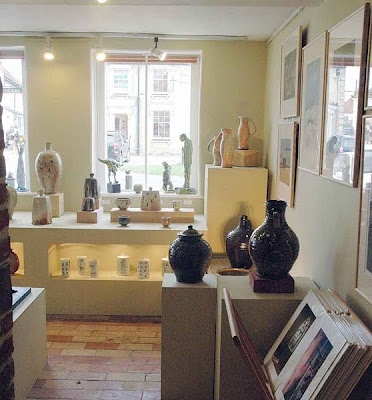 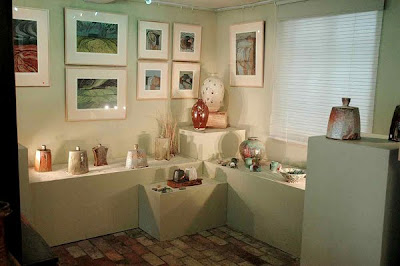 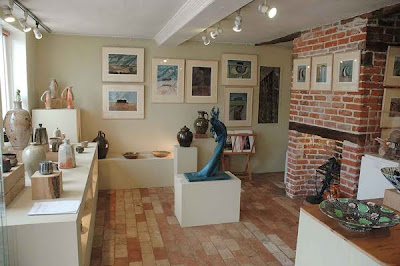 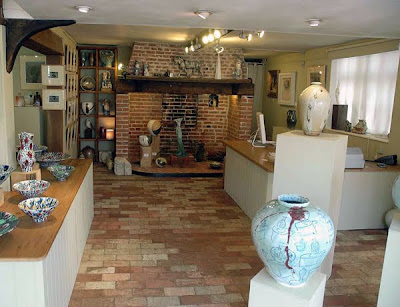 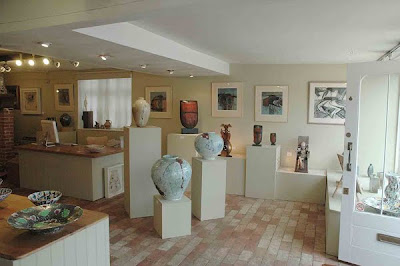 I thought that instead of talking about the gallery and the work in it that it might be a good
idea to let people get an idea of what it looks like. I have often tried to take pictures inside but
they never give a true impression, I know that if I put off waiting until I have
photographs that I am happy with it will never happen so I am showing a few pictures that I took a while back.
They were taken at the time of a group ceramic exhibition so it's a case of "name that potter".
In truth the place never looks a great deal different to this as we always have pots on show and if not pots then ceramic sculptures.
The building itself is interesting and has a mixture of styles and periods.
Like most of Long Melford [the Village the gallery is in] it is a timber framed structure
although you wouldn't know this from the outside appearance as like the majority of the other
buildings it has been covered outside with brick.
If the outside 'veneers' were removed from the buildings what you would see would be a Tudor
"chocolate box" village, but for whatever reason the structures have been covered over at different periods in time.
So from the outside we are a 'Georgian' house and on the inside we are?
Well, I'm not really sure as it's a bit of a mixture, we have three fireplaces two of which are 'inglenooks', a reclaimed brick floor, a few new oak beams and plain plaster walls, underneath which is 'wattle and daub' which can be seen through a glass panel which was put in place just
to give people an idea of the age of the building.
It's not perhaps the best setting for contemporary art, but we like it and it is the very quirkiness of the place
that made us go for it. There are times when hanging pictures that I do think
"why didn't we go for a modern plain building"?
That aside, I suppose the odd mixture does suit my equally muddled mind.
The display areas we have tried to keep as plain as possible, and where possible have created 'sand pits' to exhibit work in.
Perhaps a bit of an outdated idea but I like it and after all "it's my party".
I am constantly trying to think of different ideas for displaying work and if possible I would love somehow to include water but I still haven't figured that one out yet.
I know there are lots of things that need to be changed and in time they will be, but the most important aspect that we want to create is an environment that people feel at ease coming into as I can't stand the "look but don't touch" atmospheres that you encounter sometimes.
I always want to sell the art we display but if people are happy to come in, feel relaxed and
just enjoy and talk about the exhibits then that gives me equal pleasure.
Not so long ago an old lady came in and spent about an hour and a half looking and asking questions. Before leaving she purchased a small pot and said "I'm sorry that I didn't spend much I will come back and talk to you again when I have some money". I told her to come back whenever and as often as she liked and that it didn't matter about buying anything as I myself couldn't afford to buy the very work that I show.
I explained that although I couldn't afford anything at least I had the pleasure of admiring and caressing some of these beautiful objects on a daily basis.
"Yes", she replied.
"You are just the curator. The curator of beautiful things".
She will never understand what pleasure her words gave me, someone understood how I felt.
So if anyone wants to come, admire and just talk, the door is always open.
Even when it's freezing.
Posted by imagine at 08:19