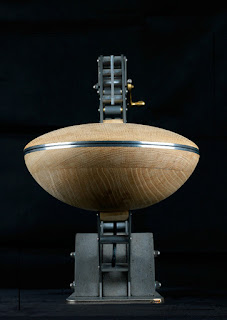 There is just a limit to how much time that can be spent doing paperwork, answering emails and tossing bills in the dustbin.
Sometimes, just "now and again" I like to remind myself of what we are really about.
It's not an office it's an art gallery.
It seems impossible but sometimes an entire weeks good plans can disappear with nothing seeming to happen.
Except, office work.

So.
After just placing a stamp on the last post of the day my thoughts were
"right, whats the next job".

Whooooaaah!
No, lets do something good for a little while, I decided

The something good is to tell you about a recent visit by an incredible sculptor/craftsman.
Dan Morrison. 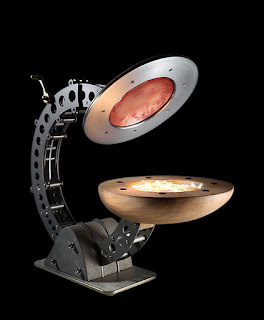 Dan had been recommended to me [and me to him] by another artist.
I was told....
"he makes these incredible lights, they are just right for you and your gallery".
The statement from a person I highly regard gave me pause for thought.
So I decided immediately to look at Dan's work.
I was impressed it but wasn't sure.
Would it be right for us, maybe?
I had to see it to be certain.

Dan generously offered to visit the gallery a few weeks later, so time would tell. 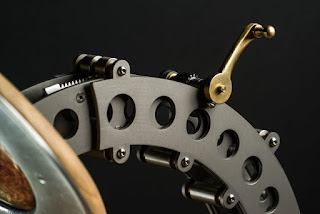 How many times have I had to remind myself,
"never, never judge a book by its cover"?
Too Many

So it was again.
A few simple pictures can only give you a glimpse of an artwork not an understanding and appreciation of it.
This was certainly the case with Dan's lights,
no pictures will ever adequately show the full beauty and complexity of his work.
In the same way the photographs I had seen of this "serious" craftsman did not prepare me
for the meeting with this exciting artist from "up't north".
It turned out that Dan is equally excitable and mad about many different things like myself.
We were at friends [it seemed like years] instantly, our thoughts and idea's matched.

He had visited to bring me his
"Alchemist Clam Clock".
I think no further description is needed once you have seen the photograph's.
It is incredible, beautifully designed and very well crafted.
It made me think of being a small boy playing with my "Meccano" set, it made me feel young.
This is what he wanted.

I am now proud to have it on display and in the evening it is a treat to see the response of people as they walk pass.
Glowing in the window it stops them in their tracks and I often hear laughter and words like
"Wow" 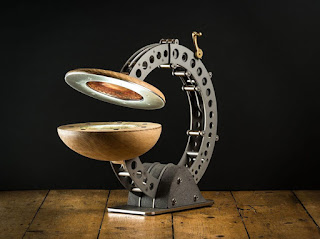 It appeals to all children, whatever their age. 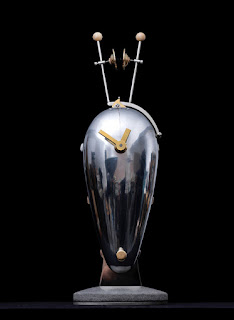 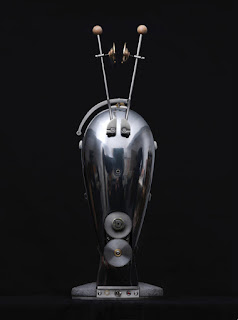 After 2/3 hour visit [which seemed like minutes] Dan prepared to leave.
"Before I go would you like to see my clock"? He asked

When he returned from his car I was on my knees under the counter sorting out a receipt.
"Here it is", I heard him say.
"Just a minute" I replied.

When I raised my head above the table  I was
STUNNED.

I have never seen anything like the sculpture that was sitting there. 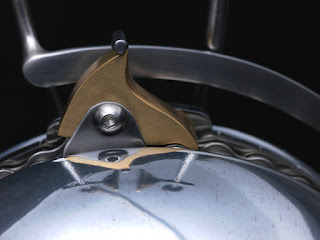 It is fantastic, it is 'Buck Rogers' meets the future, very modern yet 'retro'
and so incredibly engineered/crafted/designed.
I had to have it
Well, the gallery had to have it or I would never have peace, it was too good to go anywhere else.
"This is not leaving my building". I kept telling myself. 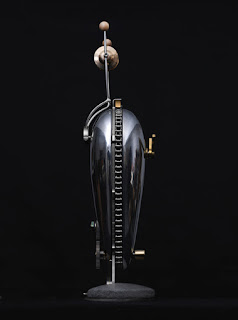 Being the lovely, generous, foolish, like minded soul that he is Dan agreed.

So, I was happily able to wave goodbye to him as he drove away, content that I had the object
[just for a little while] of my desires.

I turned startled as the clocks 'Cymbols' clashed together
Reminding me that I now had a very remarkable new sculpture from a remarkable
and very different artist. 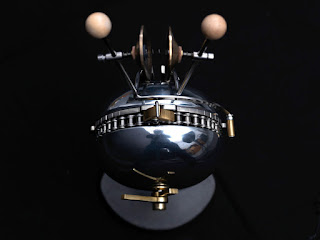 A man who lives and works in a very old working class industrial town,
steeped in the history of production.
Yet, producing sculptural art for the future.