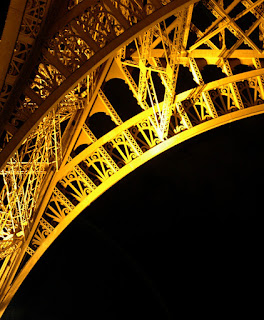 I have just returned home from Paris and here is my photograph of the Tower as proof of my visit.
More snapshots will follow in another post.

However, the purpose of my visit was to meet artists and visit certain galleries,
It was not intended to be a holiday, although I do feel refreshed for a short break, and it has certainly filled me with enthusiasm and idea's for the future.
I think that I was becoming a little "desk bound" and it has been good to remind myself
What I am working towards and trying to achieve. 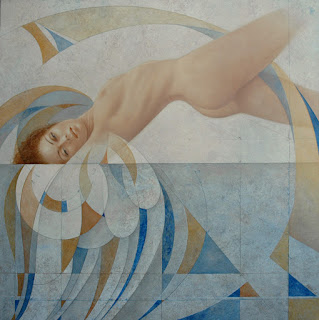 Nowadays
It seems I am just not very good at getting out of bed early in the mornings,
But for this trip I drove away from home at 3.30 .a.m. and to my body it felt like I was still asleep.
For some stupid reason I thought that it would be good to catch the first train of the day.
My thoughts had been that I could make use of a few more hours in Paris.
Bad idea.
Nearly two hours later I was not only regretting the early train but also the fact that I had not
departed at least a half hour earlier to catch it in time.
Who expects a busy road that early in the day?
[anyone who thinks]
I had forgotten that is when most trucks and container lorries travel
But despite the panic [and taking the wrong road] I was on the train and asleep as it left for France. 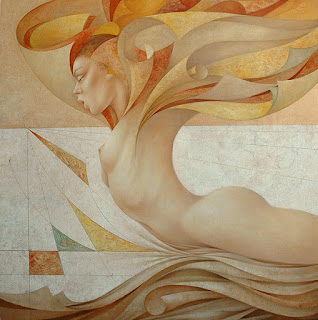 It seemed almost minutes later that I was then getting lost on the Paris metro.
This should be impossible as it has always seemed so much easier than the London Underground.
I put it down to the panic of trying to arrive for my 11. a.m. meeting.
I know that I was being timed or judged but I had given the time of my arrival and I wanted to
make an impression.

After [eventually] leaving the metro
Walking towards the home of Daran I couldn't help but have a feeling of 'Deja Vu'
Despite the fact I had never been to this part of the city before it all seemed a little familiar to me.
The reason for this was explained to me later
It was the location of the most recent Paris terrorist attacks, I was looking at shops, buildings and
restaurants that I had watched on TV at home just a few months earlier.
The difference is that then guns were firing
Today the sun was shining and this small part of the world was at peace.
The most dangerous thing for me was to remember that everyone here drives on the wrong side,
so I had to look right not left as I stepped out to cross roads. 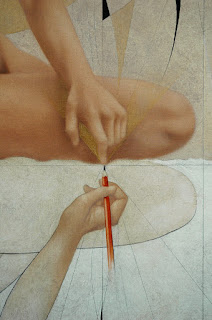 I made it, and almost on time.
A short time later I was relaxed and enjoying a breakfast/brunch of Champagne and various
culinary delights that had been prepared for my visit.
Or maybe perhaps this is how the Parisians eat every day.

I was greeted on my arrival by a friend of Gerard's
He is Pierre Herman a man that I have come to know from many telephone conversations.
Fortunately he has been acting as our 'go-between' interpreter,
Because for some reason Gerard has never bothered to learn the English language
[something unheard of for a French person]
He obviously believed my lies of being multi-lingual
With my French and his English
I don't think that we would ever arrived at this day without help from Pierre.
Someone who is not French and has a very mixed heritage, ["I was born from Saturday Night Fever"]
As a result he can speak many languages.
His life story would make a very good book, but as I struggle writing a blog I best continue
with my own short tale. 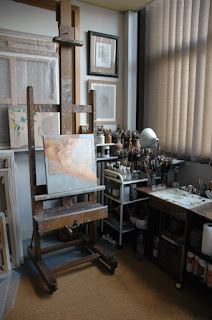 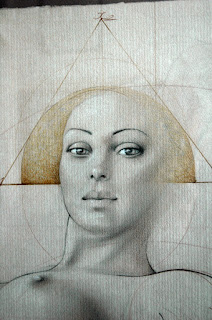 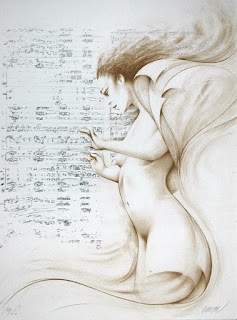 I was visiting with a purpose.
We were to be finalizing plans for Daran's solo exhibition at Imagine Gallery.
It is set for the middle of May and there was a lot for us to discuss,
Also, Gerard wanted me to make a choice of his paintings that "I liked" and which I felt would
fit in with our gallery.
This was a good idea as I hadn't fully appreciated the scale of his different artworks but now I can
make plans in advance of what paintings can be displayed in different area's.
But before that I have to decide which artworks I would like to have on display.
This was going to be a long job as the quantity and variety was too much to absorb in a few hours. 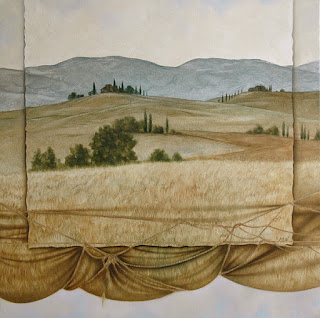 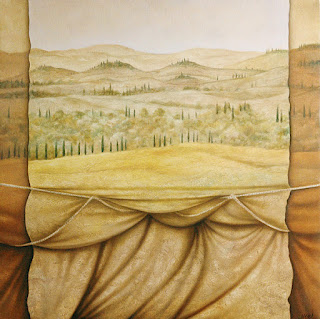 I made the decision that the best thing to do was to photograph every
Painting, drawing and lithograph I was offered
Doing this I would be able to study them at length when I returned home and with the bonus of
having the sizes plus memories of my first impression.

Prior my visit I had certain preconceived ideas of how the exhibition should look.
I was going to choose only the figurative work, male and female.
Because some of his figures have wings I think that in my mind it was going to be an exhibition of
Angels & Demons
I certainly had absolutely no intention of choosing Landscapes.

But walking through the entrance of his studio the first image I focused upon was a Landscape.
A Landscape with a difference, then my eyes turned to a second.
"I like those", I surprised myself by thinking.
From that moment my thoughts were no longer closed, I decided to "go with the flow"
Or where my heart took me and which Gerard would allow me.

When I had taken all of my photographs and as we sat and talked together
My eyes kept returning to one painting.
I had liked it from the first viewing, now I noticed as the light altered the picture changed.
It is beautiful but it seemed so strange that as the outside light varied so to did the painting,
it altered dramatically. 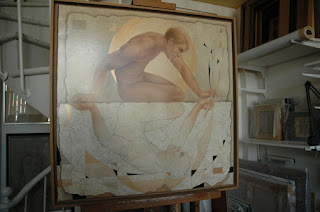 I loved it.
My first choice was made, I have to have it in the exhibition. 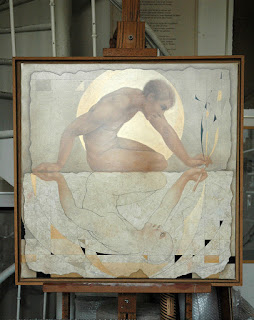 There is not enough time for me to recount the full details of this delightful visit.
It was great fun.
Meeting with both Pierre and Gerard's partners.
The wonderful food provided, the interesting stories told, were all a feast.
I can not explain and it is hard to describe how it feels to be sitting relaxed, talking, laughing and Enjoying the company of
Friends, friends that you have never met before.
Yet, people who are not strangers. 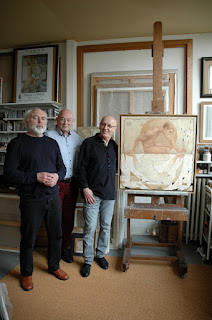 Before my departure Pierre insisted that we had a photograph of the occasion.
Having a dread of being photographed I resisted.
So here it is. 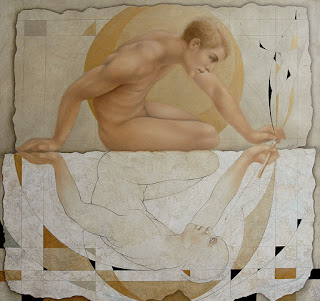 This is my first choice of the paintings.
The others I must decide upon tomorrow as I had promised I would do it today.
But I still can't make a decision.
At the moment I have a list of 20 but I will refine this a little[or add to it].
Decisions, decisions!
I will show them to you in a couple of months.
Promise.
Posted by imagine at 11:21