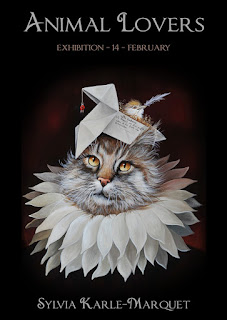 Late as ever.
Buried behind all of my daily thoughts, concerns, and office work has been one important thought,
Maybe I should mention of our next exhibition?
However,
With so much to do writing my blog doesn't seem that important,
It is just an indulgence for myself and a way of looking back on what we have done
During the course of the year.
But
Today in between making picture frames, painting walls and answering mail
I decided that I must write something or the whole event will be over before I even mention it. 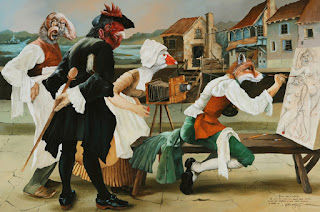 As you can see her paintings are just a little bit unusual.
Animal portraits with a difference.
Painted in the style of 'old masters' her animals take on a different dimension and personalities
All of which makes it easier to relate to their emotions and sensibility.
Animals that we know to be enemies are shown as friends, even lovers.
Their relationships are those that we would like to believe really happen
Maybe, set in an innocent past or perhaps a place we all dream really exists.
Utopia? 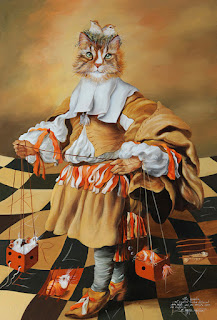 The exhibition is titled
ANIMAL LOVERS

I would love to explain that the reason for the title relates to the relationships of the subjects
[which it does a little]
But that would be a little bit of a lie.
The real reason
Is that the date for the exhibition was set for February 14 [for other reasons.]
Unfortunately none of them romantic

For me the 14th was just a Sunday in February [which tells you a lot]
That was until I had to book hotel rooms for Sylvia and her friends who are all travelling from France for the "Vernissage" of the exhibition.
At the hotel the receptionists exclaimed,
"oooh, six people from France for Valentines day that sounds very romantic".
"What"?
"February 14 Valentines day". 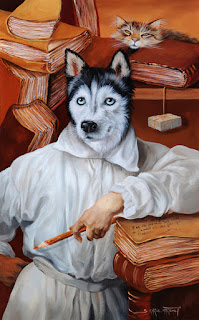 My thoughts were that I had made a big mistake, I should have arranged an exhibition featuring romance.
Then, the more I thought about it the more I decided that I had, this was romantic.
We all love animals
And certainly the animals in the paintings have close relationships.
So until I had a better title it became, and has remained
'Animal Lovers' 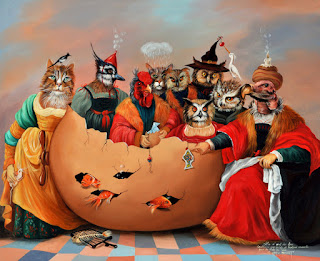 I don't think that the paintings by Sylvia need explaining as they tell their own stories
Yet, I am sure that we all read a different story in each painting
They are all different and very emotive yet they all have one detail in common.
A Ladybird. 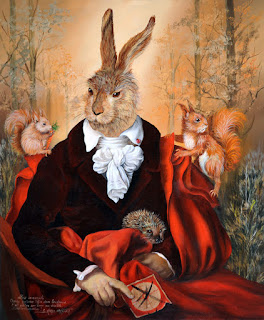 Ladybird
The small red insect with wings beneath its shell.
There is one featured in each and every painting. 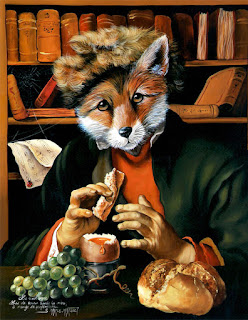 Recently I have grown a little "rusty" with my "parlez vous'ing"
Becoming to understand this Sylvia suggested that "perhaps" to aid our conversation "perhaps"?
I should speak with her friend who is fluent with English.
Not a problem,
I can do English.
Multi tasking, multi-lingual, I can do it.
I'm also pretty good at multi bullshitting, but that's something I am working on. 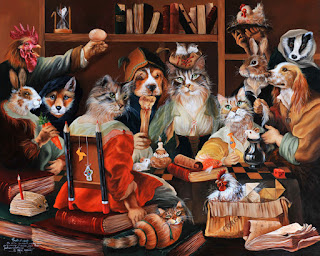 Her friend Evelyne explained to me.
You may have noticed that each painting contains a 'Ladybird' hidden amongst the detail.
I confessed that I hadn't, but then I started to search.
Sure enough in every painting there was at least one Ladybird.
Evelyne told me the reason for this. 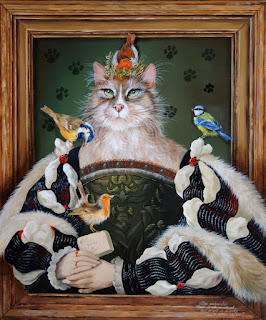 She recounted a story, a story that I have since researched [multi tasking]
and found many variants of.
This is the version she told me:

It was the time of the French Revolution.
Beheading of Royalist's and people of wealth were a common occurrence.
In one incident a farm worker was assigned the task of being the executioner.
His victim a beautiful young girl.

The "executioner" was not happy with his job, he did not want to do this,
But rather than become a victim himself he proceeded.

The woman placed her neck upon the block.
As he looked down upon her the farmer noticed that sitting upon her neck was a Ladybird.
This meant that he would not only be killing the woman but also the innocent creature.
He reached down,
Picked up the insect and blew it away from his hand.
In doing this he felt that God would understand that he was not a bad man
Perhaps he would be forgiven for his horrid act deed.

Sylvia
Includes the insect in each painting she creates.
If the painting is not good enough she hopes that she will be forgiven.

I don't think she need worry.