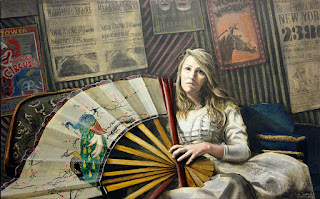 Will Teather is the artist.
Everything that he creates is very different and each piece has its own unique history with many stories attached.
They are set in worlds of his vivid imagination which he makes a reality.

In the past he has created so convincing a fictitious history around the subject in one painting that it became believed that the woman portrayed actually existed.
I suppose this was helped by the fact that he had preserved her clothing in museum style cases.
I had not intended to start talking about
"Maudeline Spacks", the vanishing artist.
As I don't have that many hours spare to devote to that creation.
Suffice to say this not existing person now has her own tribute band.

To describe him as a "larger than life" character would be very apt.
For one reason he is large and very tall, but more to the point he has a personality
That dominates whatever space he occupies
In this instance it was in my gallery.

He was here drawing me into his own world. 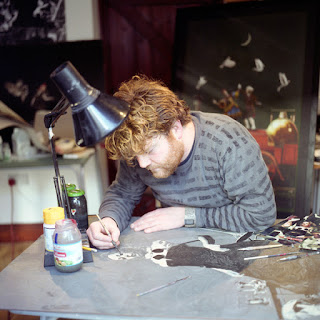 The reason for his visit was because I had pestered him for one of his "new" works
A series that he has titled
Infinite Perspectives
These really have to be seen to be believed, neither I or anyone else has seen anything like them before.
These are scenes which are painted onto giant globes which are suspended from a ceiling.
The amazing thing is that whatever area you view is perfect yet when you look to the sides the perspective changes as the painting diminishes into the distance.
Turning the globe then brings those area's into perfect size yet what you had been looking at now becomes smaller and slightly distorted.
They are difficult to describe. 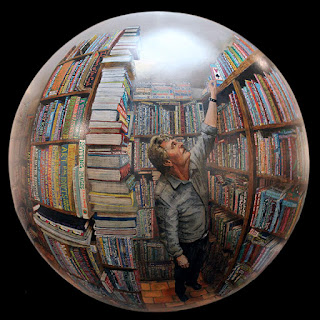 Above is a portion of one such painting.
The picture below of Will in his studio is not an attempt to show how they look as it just
shows the artist with paper "mock ups" and small "keep sake" recreations of the real thing.
You have to imagine BIG and perfect. 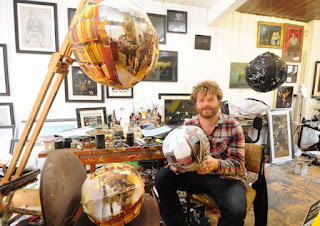 Knowing that he works on a very large scale I had been "playing safe and had requested
A "half sphere" painting that I loved.
I understood that it attached to a wall like any "normal" painting so I knew
that it couldn't be too large.
Wrong!
It is concave and measures 40 inches in diameter and protrudes 20 inches from the wall.
Why had I expected anything different from this gentle giant? 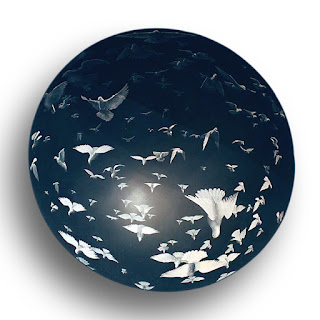 It is an amazing piece of art.
It is almost interactive, as when you hold your face close you have a sensation of being a
part of the painting.
Birds are flying above, below and around you.

Along with this masterpiece he also left me with some of his "normal" art.
Yet, of course these have a story to tell
Will just doesn't do ordinary
Posted by imagine at 09:29