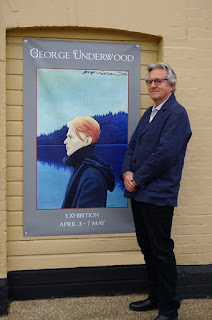 Open.
At last the exhibition of art by George Underwood is open to the public.
It has been much anticipated by us and many others, especially once the media had become involved.
For myself it now feels almost as if I am on holiday as the pressures have eased slightly
Although there is still a lot to do, especially considering I ran out of time with making frames.
There are still some to be made and new works to display.

It has been difficult trying to juggle and prioritise the different things that need to be done on a daily basis, because unlike what people think running a gallery is not all romance and pleasure.
Of course there is a lot of pleasure but that is only because of the work done each day.
But, at last after all of the preparartion
George's art is on display and to prove it here is a picture of him outside the gallery
Posing [by request] beside the exhibition banner. 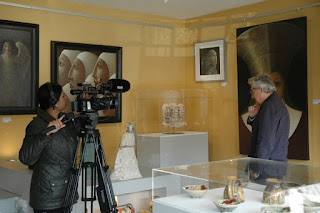 George himself has worked perhaps harder than anybody.
Not only did he produce an exhibition within a short time frame he has also been very busy
behind the scenes.
Or perhaps I should say in front of the scenes as he seems to have spent more time on television
and radio than doing anything else over the past week.
Which explains some of the other photographs. 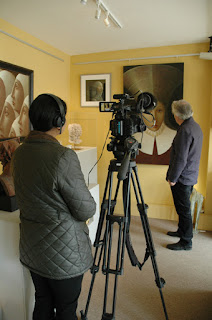 A couple of days before the opening we received a another call asking if the ITV news
could be allowed to film the opening of the exhibition?

Well let's be honest, I was never going to say no.
So a few hours before the opening the film crew and George had the gallery for themselves
[and me of course], and they were able to hold an interview focused upon his paintings
And as expected his relationship with David Bowie.
To say I found it all very interesting would be a slight understatement.
Of course there was lots that never made it through the editing process so I felt privileged to hear many stories
that are perhaps unknown. 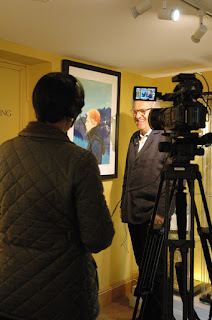 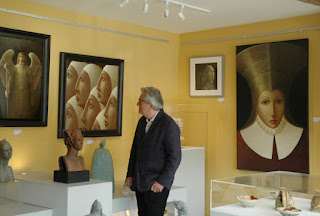 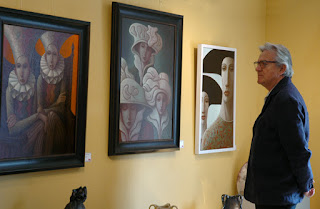 The filming continued for hours and even included an interview with myself.
They didn't actually say it but I am sure that now they must be very tempted to offer me
my own TV series.
Perhaps not. 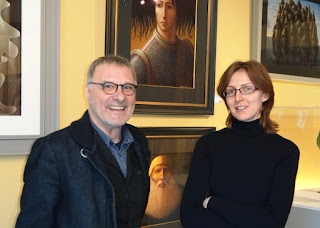 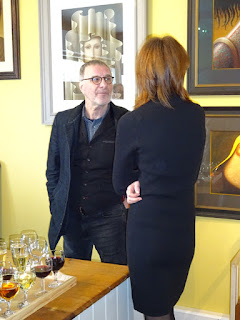 Before the camera's left we had the arrival of George's old mate friend.
Steve Harley
The man who is the driving force behind Cockney Rebel.
At one time his song "Make Me Smile" was the most played record on the radio, it is one of those songs you can never forget and whenever I hear it I have to sing along.
He is a real fan of George Underwood's paintings and he spent a long time
viewing painting on display.
What was really nice is that he didn't just talk with George, he had time for everyone who recognised and wanted to speak with him.
He was interesting, charming and polite.
I only managed to have a brief chat with him as I had about five different conversations
on the go at any one time, but it seems that Irene and Rebecca managed to have much longer chat with both him and his lovely wife.
Although in truth "Bec" rarly moved from the desk and without her we would have struggled.
She was able to entertain, hold conversations, pour wine and handle the sales without
wandering off around the gallery.
I think it's called multi-tasking, women are good at that. 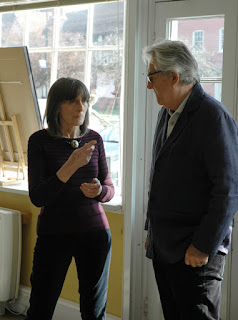 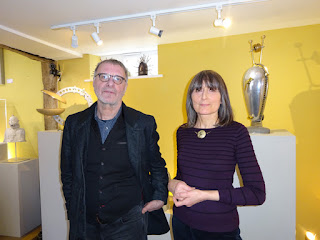 So above are pictures of them having a good time while I was busy elsewhere.
And there was a lot to be doing as the gallery was full of visitors all day
However, I did manage to get "snapped" having a cuddle with George as the evening approached.
I had been caught in the middle of my own multi-tasking
Talking and drinking wine. 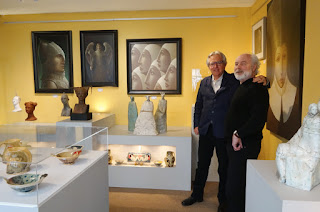 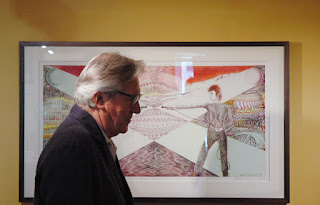 The person I most wanted to talk with was George the artist and star of the show
But as is the norm at any opening it doesn't often happen.
The artist's time belongs to the public on that day and he didn't have many moments to himself.
This was one, it was the "lull before the storm". 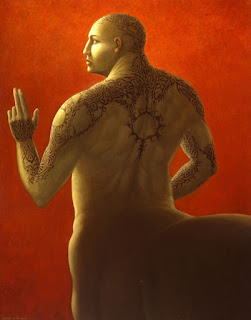 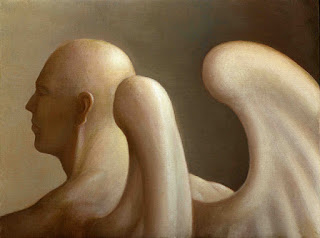 I wanted to show a little of the diverse artworks on show,
There are many and although very different they are equal with their haunting beauty.
However, there was one in particular that interested and fascinated everyone.
'The Man Who Fell to Earth'. 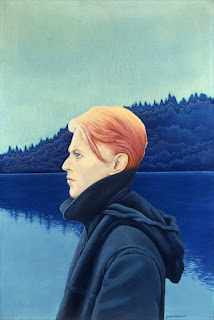 My own feet haven't touched earth since the opening,
Because of the camera's and the crowds of visitors it all seemed slightly unreal.

The morning after as I unlocked the doors I was surprised by the silence.
For a little while I was alone with my own private collection.
This didn't last for long, and today it is the same there are a constant stream of visitors who just don't seem to understand that I am trying to do something important.
I am writing my Blog.
Posted by imagine at 09:00