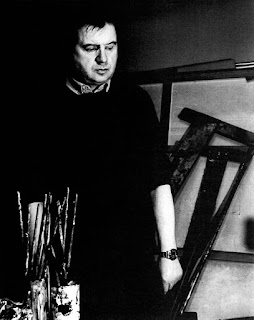 I don't know if many people will recognise the famous person above.
Dylan Thomas, Brendan Behan perhaps.
No, it's another world famous icon, Francis Bacon.
I think that perhaps most of us know of his name even if we are not familiar with his art.
His art, well you love it or hate it,
He is the artist that Margaret Thatcher described as:

"That man who paints those dreadful pictures".
Francis Bacon's comment was:
"You can't be more horrific than life itself".
How true.

So what has this got to do with me and my gallery? 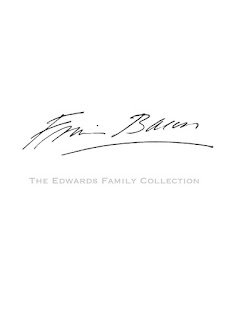 Over the period of the last year I have had a couple of gentleman visit the gallery enquiring about picture framing, these men are brothers.
They were also brothers of the late John Edwards, the man who was described by Bacon as
"the only true friend I have".
He was also the person who was to inherit the entire Francis Bacon estate.

So, perhaps once a month or so they would pop in and ask "could you frame this?"
Of course they would always leave unusual pictures, some I liked some I didn't, however over a period of time I grew to like and understand what they were about.
They were the art of Francis Bacon.
Some were were in pristine condition others stained, creased and even a little neglected.
But all very interesting, especially when I thought about how famous the artist was [and still is].

Then just a few short weeks ago I was asked would I be interested in exhibiting these works in conjunction with another gallery which is situated a minutes walk from my own.
What could I say?
So, it is that in a weeks time we will be exhibiting Francis Bacon prints from the
Edwards Family Collection.

I put myself forward to design the invitation for both galleries.
I confess that the cover featured above is the most simple I have ever done, but I like it.

When it came to design the inside and the reverse it became more difficult.
The single text page which is not shown had 5 versions and took 6 days.
The reason why is because I was attempting to tell the whole story of Francis Bacon's relationship with John Edwards and the very strong connections they had with my village.
It was impossible, and as I learned more I wanted to tell more of the history, it really is fascinating.
So the text became smaller and many cuts were made but when it eventually went to print
it did tell a lot of the history.
The reason it is not shown is because I think the text will be too small to read.
However if anybody is interested I will send them a full copy. 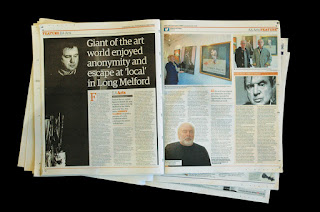 Today the first of many newspaper articles appeared.
It tells much of the history that I have referred to especially Francis connections with Long Melford.
He would often be seen in the pubs and is fondly remembered by local residents, to the villagers he was just "a local at the pub".
I'm sure that if the clock were turned back many people [myself included] would be asking him to do a "doodle" upon a beer mat.
The newspaper was constricted in terms of what they could portray because of copyright, so they concentrated on more innocent images, including myself. 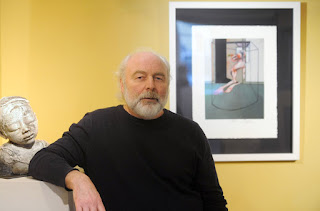 I have always shied away from showing pictures of myself, I would prefer people to think I am young and attractive [in fact I did ask the photographer could he wait 5 minutes for my son to arrive in the hope that people might think that this handsome young man was me].
So because I can not show you pictures of the art you will have to suffice with me standing near a print [and alongside a beautiful sculpture, but more of that later]. 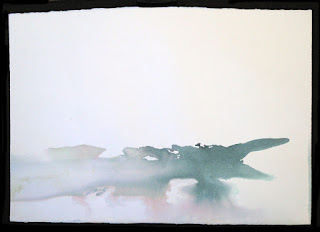 It occurred to me that as I am unable to show too much of the art I would be allowed to show you the reverse side of the prints.
"Who wants to see that?"
In fact it is the stains/smudges/cup rings etc. that make the images so much more attractive to me.
These are prints that have not been revered, they are just pictures that were left for family members which have been stored away and in some cases forgotten about.
We have all done that but perhaps we have not all had famous friends. 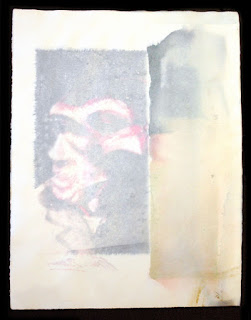 This is an exhibition which is being held in memory for one family member.
A younger brother who is thought of each and every day.
John Edwards
The man who just happened to be the best friend of a famous artist
Francis Bacon. 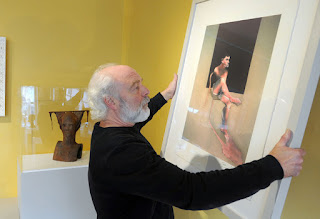 It is also an exhibition for the local community.
Many who knew and rubbed shoulders [and shared a pint or two] with Francis,
But who have never witnessed his art first hand.
The exhibition is for two days only and has been planned to coincide with the village Christmas Fair.

The family of John Edwards are donating the proceeds of this exhibition to our local church.
The church where his ashes will one day be placed to rest.