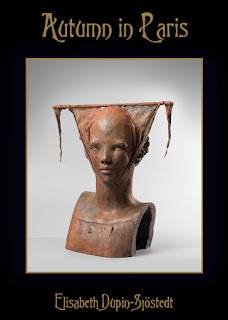 This post was supposed to have been about some of the varied works that we have received between
the recent exhibitions.
As usual time is slipping through my fingers while I am occupied with daily events
Office work, picture framing and of course visitors.
Sometimes I become buried under so many other things I forget that it is the visitors through the door
who are the most important people in the building.
On many occasions they also contribute to the most enjoyable part of the day.
When people have a genuine interest in the different works and ask questions about the art and artists
it makes for a very enjoyable day.
These are the people who come back time and again.
On occasions they might purchase and that is a bonus but it is their genuine interest
that makes for a rewarding day. 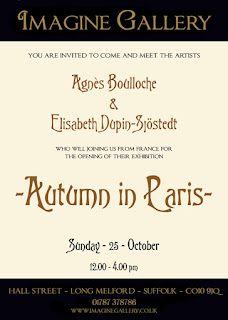 Unfortunately it has been the "office" work that has been occupying most of my time recently.
It tends to creep up on me slowly until I suddenly realise I am engulfed by it.
I had no understanding that this is what I had signed up for 10 years ago when we first opened.

So, intentions of doing one or two posts about the new arrivals have disappeared.
I started to remember that we have another new exhibition soon to open which had not received a mention.
With a little more than a week to spare here is that first mention. 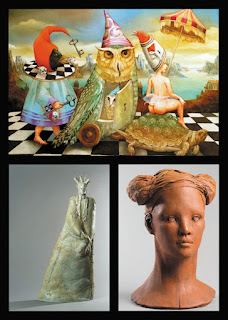 You may remember that much earlier in the year I visited Paris to meet with two very different artists.
This new exhibition is a result of that trip.

The painter Agnus Boulloche and Elisabeth Dupin Sjostedt the sculptor
will be sharing a joint exhibition with us.

At a glance it is obvious that they are artists working in very different styles, they are also two very successful artists who are exhibited in exhibitions throughout Europe on an almost "back to back basis".
I had been hoping to hold two individual exhibitions but both had so many commitments
that their only available dates coincided.
So with a little thought [about 30 seconds] I decided that this could make for a very interesting
joint exhibition.
So dates were agreed and in a weeks time it is to happen. 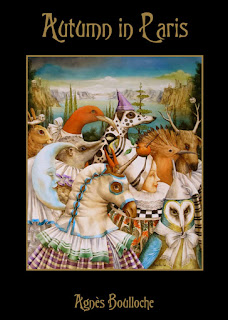 Of course this will lead to its many difficulties as I appreciate that the artists involved are not as
multi-lingual as moi.
Hey Ho, I will have to take it in my stride.
As soon as I mention "Je ne parle pas Francais".
Not only will they be stunned but it will make life a lot easier.
Of course I will toss in the occasional "ma cherie", and maybe hum a Charles Aznavour song which
I am positive will put them at ease, they will think that they are back in Paris not Long Melford. 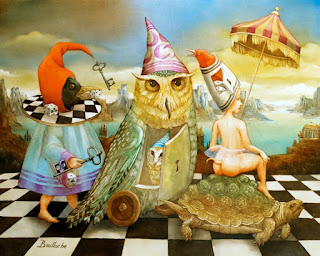 "Autumn in Paris"
Why is that the name for the exhibition?
No reason at all except that is the location that I met with both artists, although they both own other homes in France, Paris was the location that we first met.
And, of course it is Autumn, plus it sounds romantic [a little like myself].

In seriousness both artists are incredible and I truly appreciate that I have been allowed to exhibit
their art in England.
Of course an exhibition like this does cause lots of transport problems and it does weigh heavily on my mind what I am requesting from both artists.
However I have been very fortunate
Elisabeth has volunteered to deliver her sculptures in person, plus I have discovered an
"Englishman In Paris"
who has collected the paintings from Agnes and delivered them here. 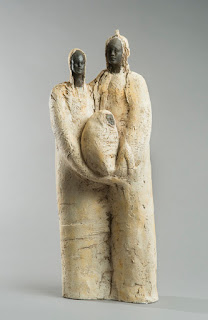 These paintings have been the reason for me being so occupied with framing.
But that has been good.
Lacking sufficient "short term" storage space, I have been standing the paintings against the walls of the gallery as they were framed.
The interest and result has been fantastic.
Two have sold before reaching the walls in a weeks time.
I am expecting a similar reaction when the sculptures are delivered, it makes me understand why both artists are so collected throughout Europe.
Now for the first time they are exhibiting here in England, in Suffolk, in my gallery.
Wow!

It is such a shame that they have not learned the language as well as myself.
Practise makes perfect and I will have to allow for this "ma petit pois".