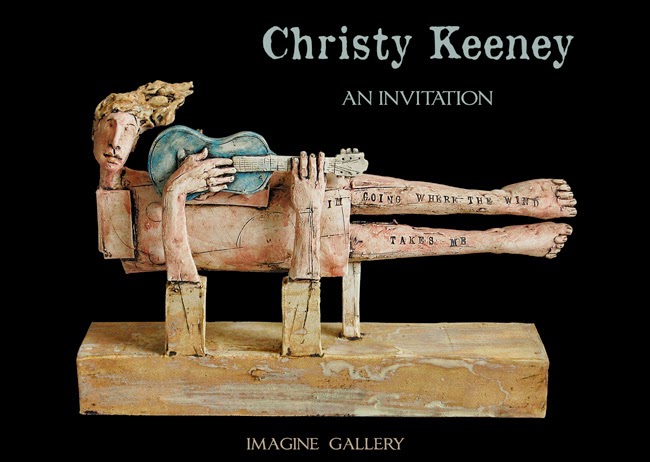 I think that maybe the cover of the invitation for our new exhibition might say it all
Laid back and relaxed.
Of course it is the Irish sculptor Christy Keeney
who I told you about a little while ago. 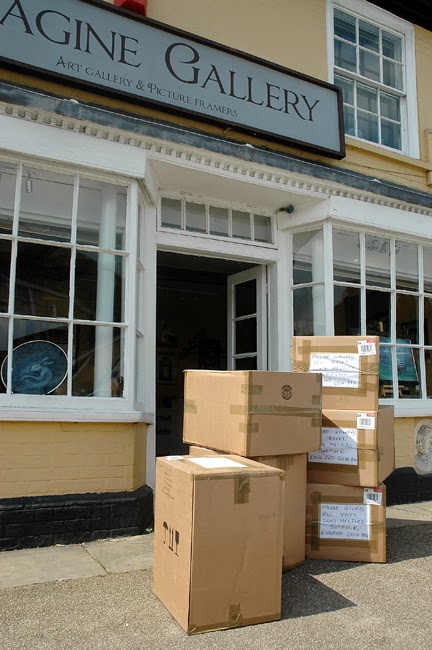 I have grown used to being "up to the wire" with work arriving close to an exhibitions opening,
but I did know that however close to the date Christy would never let me down.
I admit I was starting to get concerned about how much time I might have available
to change the whole gallery around but I was never concerned
about if it would arrive. 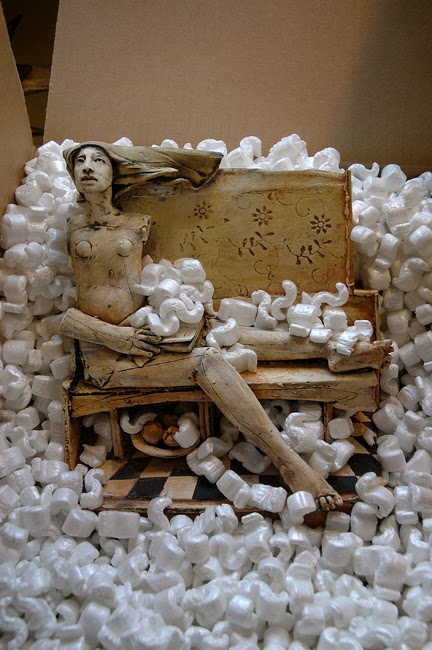 As I explained to the people who asked if Christy's work had arrived yet.
"No, he's an artist."
"What does that mean"?
"It will be here when it's ready and when he is happy with it."
Christy is not laid back he is a total professional, it's just that he doesn't worry as much as me,
and that's just not fair
If I'm worried then I want everyone to worry with me.
So I understood that his sculptures would arrive in good time
but only when "he"was happy with the results. 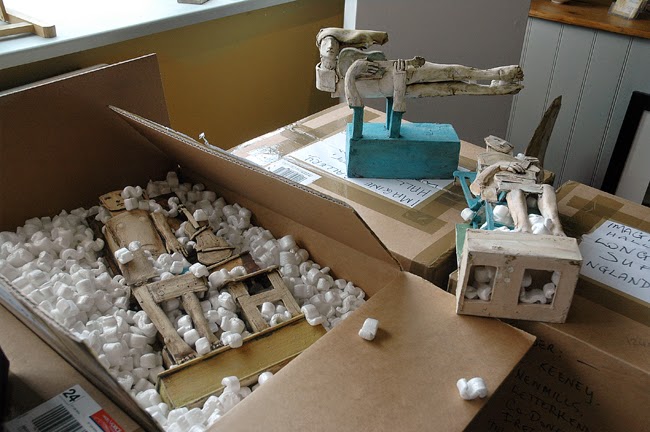 So the pictures above show the arrival,
what a fun time that was, it made me wonder why I had ever worried at all,
now it was time to relax and enjoy things for a little. 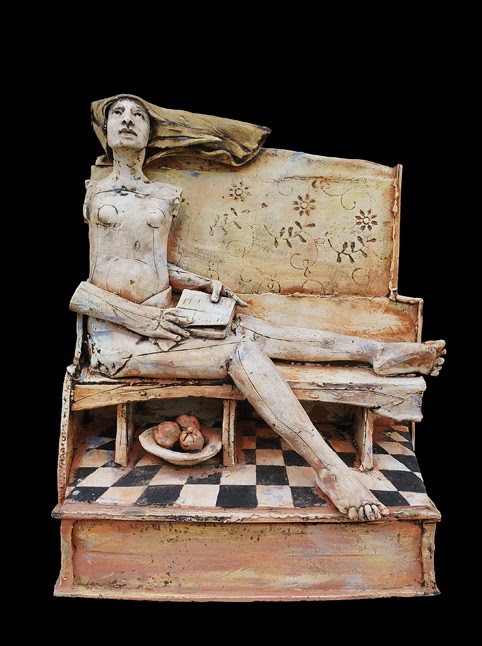 Whenever any new work arrives it feels like the Christmas times I remember from childhood,
"just what is inside those boxes"?
No matter what else I have to do I always take a long time opening such "presents,"
the anticipation of what might come next is just so exciting.

So much of my time is spent "working in an office" these moments are relished and enjoyed.
These are the times are that make having a gallery worthwhile. 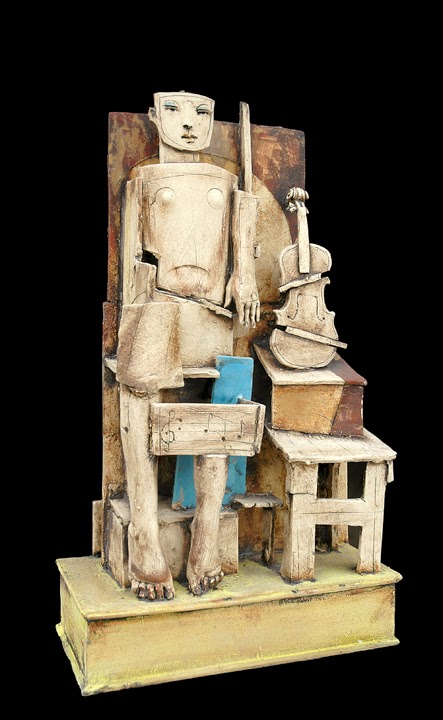 Christy's sculptures are dynamic,
They have no grey area's, people love them or hate them, they are just strong and direct,
In fact he is one of the most admired artist's in our gallery,
his work seems to appeal to people of all age groups.
We are often asked by his admirers "please don't sell that before I come back again".
For some reason his art just connects with a lot of people.
Including myself. 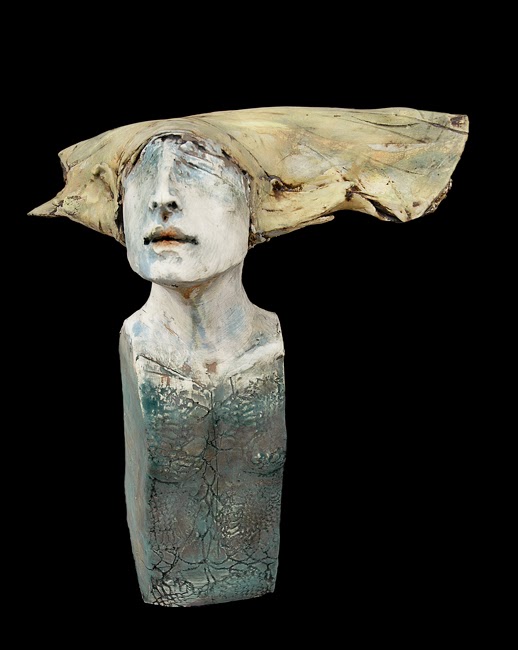 Unfortunately, with this exhibition that presented me with a slight problem.
I "can not" purchase anything from my own gallery.
Many times I want to,
But I decided long ago that I couldn't or we would end up with no stock, and no money.
So, I just look and admire and pretend that everything is a part of my own
private collection.
That's not all bad as at least my collection changes more frequently than most peoples.
But sometimes I do have regrets. 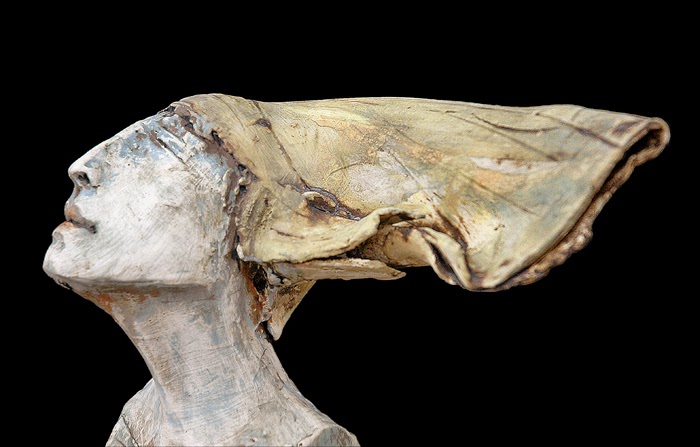 The sculpture above is something that I would have loved to own
I can't explain why but to me it was just beautiful plus also a little bit different for Christy.
I wanted it so badly I was convinced it would be the first piece to sell.
It was. 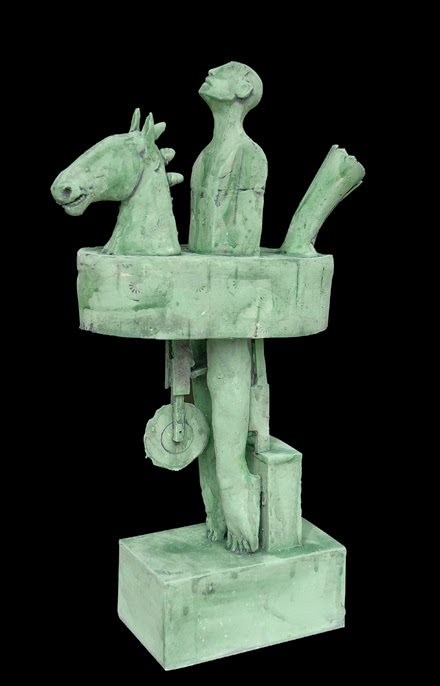 I spoke with Irene about it on the morning of the opening.
"If you like it, treat yourself and buy it".

"Where would I put it at home"? I answered
As I have boxes and boxes of my own personal collection stored in the garage.
No, it had to be sold, after all that is what we do.
So, it was with regret that I placed a 'Red Dot' on it when it sold.
But it did sell to a very nice collector who I know will enjoy it almost as much as myself. 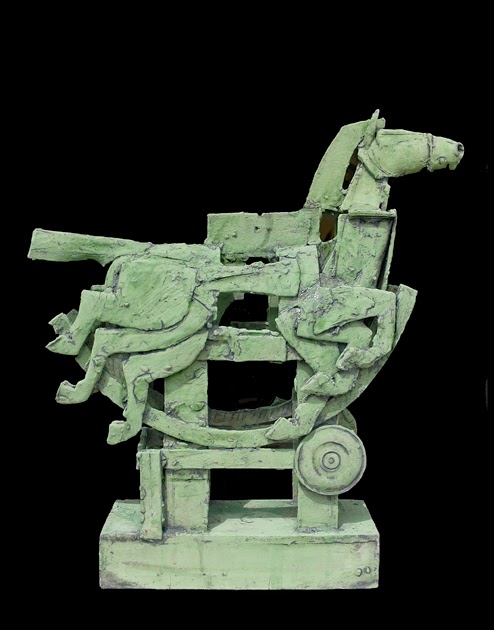 However, although that was my own favourite there are many unusual sculptures that are on display.
Since they arrived I have been compiling my own "wish list",
so I suppose the pictures shown here are a part of that,
Not in any particular order but they are all sculptures that I recognise as being a little special.
I have admired Christy's work for a long while and many times I have pondered, thinking,
"I will get that for the gallery in a few minutes,"
only to lose out to someone who didn't hesitate. 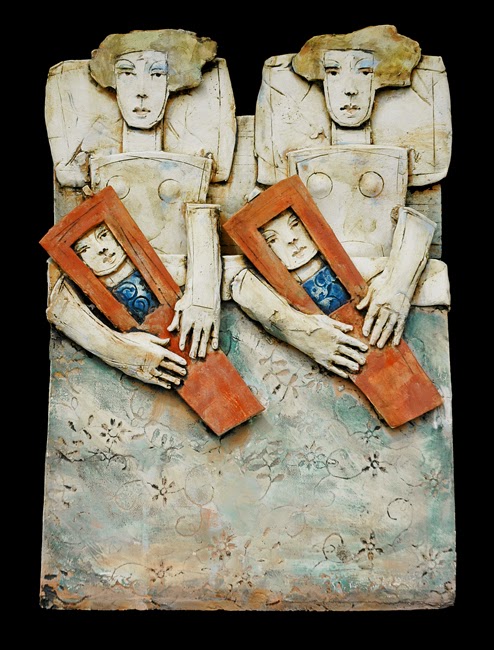 At least now with his exhibition here I know that we have some of the best pieces available,
Of course later in the year Christy will visit England
and as usual the galleries and collectors will be fighting for his best works.
Meanwhile, it is just nice to understand that only we have the best. 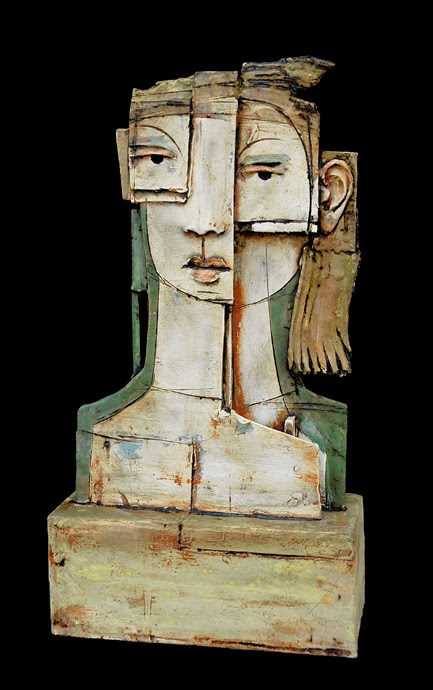 Including this head "DIVA"
A sculpture where he  acknowledges his influence of artists like Picasso.
I can't take it home but at least this week it belongs to me.