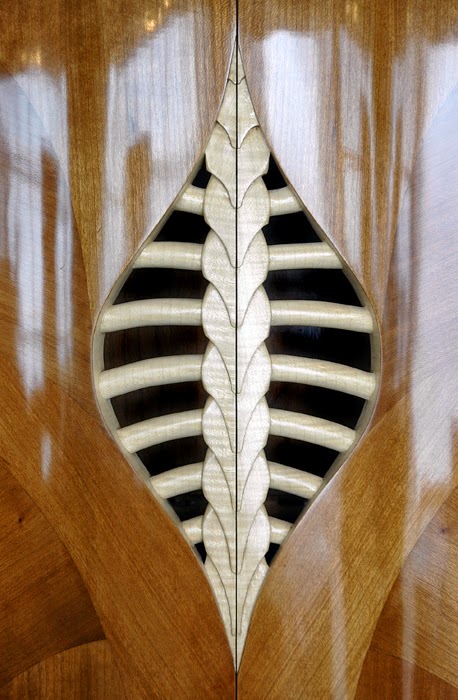 I mentioned last time I wrote that I had also visited another artist, but I lied it was actually two.
The first visit was a "pit stop" collection from the furniture maker
James Evans.
The brief nature of my visit had nothing to do with the quality of his work, it was just that I was travelling to a timetable, or at least I thought I was.
But I will explain that in a little bit. 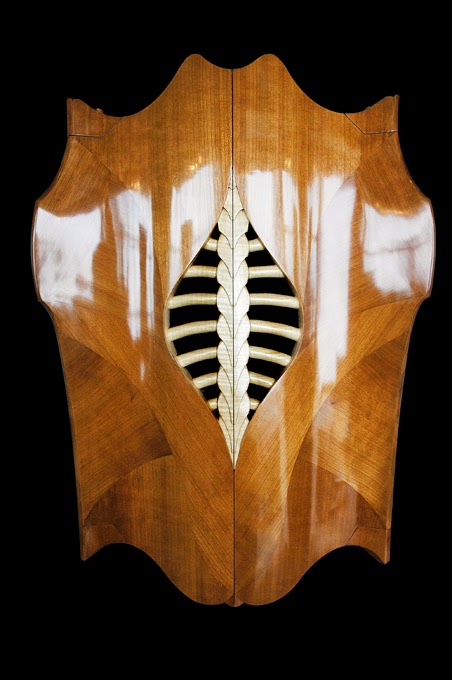 I will confess that I am not really a great lover of carpentry as an art form,
there are just so many things out there that are poor.
Don't get me wrong, I love things created from wood and in fact for a short period in one of my past
life's I did support the family by creating with wood and I remember that period as being one of the happiest of my life.
Thinking back I re-call my small [then] children would come to the workshop each morning
[still in pyjamas] to bring me my breakfast.
Two bags of crisps.
That was a lovely period in my life.
Sometimes, it would be nice to turn the clock back to another time and do things differently,
but of course this would mean that I would not be sitting here today writing about the gallery
I had always dreamt of owning.

Whoops! I am drifting off into different area's as usual. 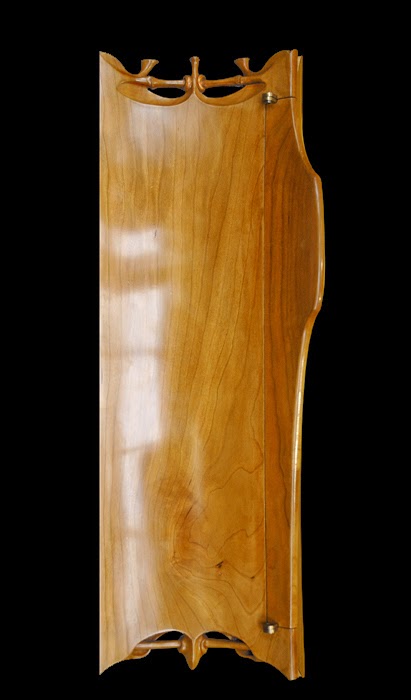 So, back to James and his work.
In my opinion he is the best artist/carpenter working in the UK.
Having trained as a restorer of antique furniture, a profession that culminated with him working for the Queen for three years,
he left her employment to follow his heart and create his own work.
And this work is truly art.
We have exhibited pieces of his work that are just stunning. Beautiful designs and so well crafted.
When his pieces are displayed within sight of the gallery windows they actually draw people inside.

Of course I want to sell everything we show
but whenever a piece of his woodwork sells I am a little sad as I know I will never
see the like of that piece again. 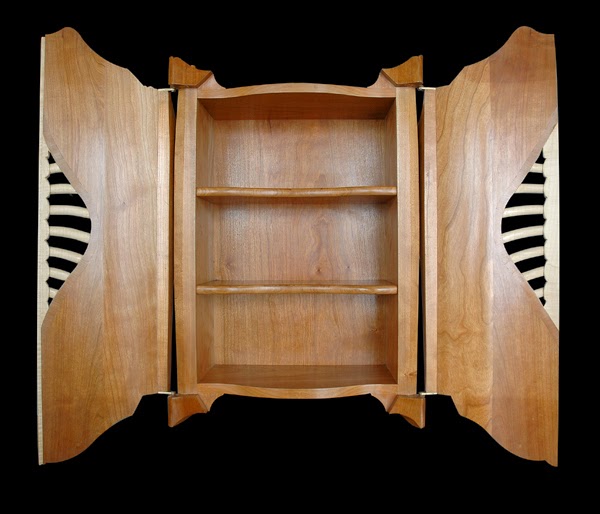 Recently, after the sale of a table [unfortunately I didn't photograph it] I started to panic
as we had so few of his pieces left.
So I have been "hounding" him for new work.
Alas, he told me that he is fully committed until the Summer [after which I can take my choice]
there was nothing available.
So the conversation started again as I was just not taking "No" as an answer.
I confess that I did feel a little guilty putting him under more pressure, but it worked.
"OK, yes, I can spare just one piece for you".
So although it was a very brief visit it was worth it.
The cabinet that I returned with I have titled the 'Cadaver Cupboard".
I can't think why. The reason my visit to James was so brief is because I had to travel further that afternoon to visit
and collect from the sculptor Paul Harvey, or I thought I had to.
But on calling after leaving James I found that one of had got the date wrong [me].
My sculptures would not be ready until the morning.
This wasn't a great problem but it did mean that I couldn't travel onwards to Wales first thing
in the morning as I had intended.
Oh well, I needed a break from driving so I booked in very early at a Travelodge close to Stonehenge. 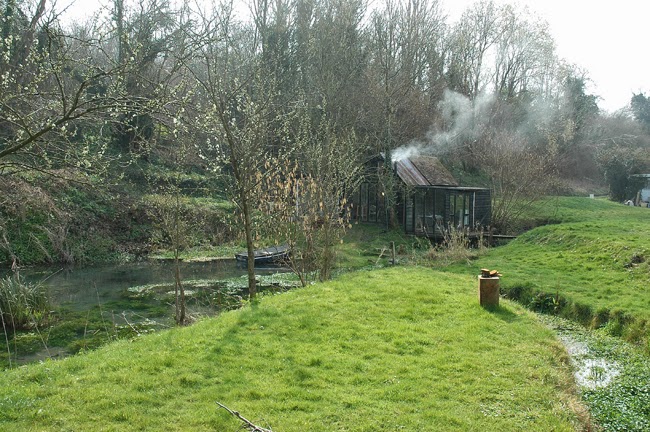 It was a beautiful evening and it seemed so very strange to be sitting on my bed reading a book
when I was aware that the sun would soon be setting below one of the worlds
most famous and oldest landmarks.
I was tempted to drive the two miles to experience the event, I didn't because
I knew I would only feel sad and disappointed.
To witness the sun setting behind the great monument while I was standing hundreds of metres away viewing from behind a mesh fence just would never equal the experience of standing
touching the stones as the sun disappeared.
Of course that is just "hippy" stuff and I understand we have to protect against that sort of thing,
much better to charge pilgrims for the privilege to stand behind a fence from a safe distance.
I just wonder, how has it ended up that we are made to pay to see things that no living person owns?
Maybe that was the original intention! 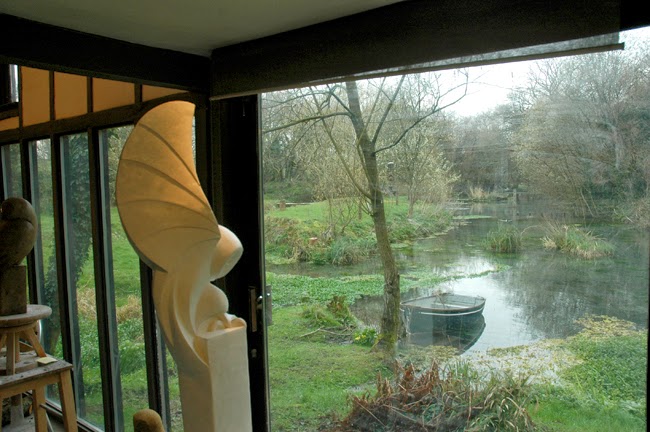 So instead of witnessing something amazing I fell asleep with a book on my chest.
It was a good book but I was tired, plus at times it is nice to get away from the stress of running
the gallery and I find on these occasions my body shuts down early.
After all, whatever is happening 'back at base' is for once out of my hands.

So I was up, showered, fed and on the road early, on route to the studio/shed of Paul Harvey. 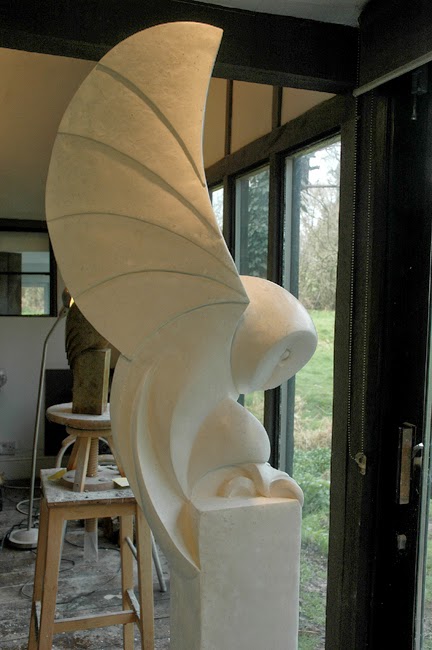 After an hour or so of driving I was soon far off the beaten track driving down country lanes
shrouded in mist. It was a lovely English country morning, which to me always means
sun, fields and mist.
Driving in the mist along narrow hedged lanes was not so much fun but it did have its moments,
like when I passed a beautiful Lodge cottage beside a pair of giant gates.
Beyond the gates was a drive that stretched for half a mile before it disappeared downhill somewhere,
on each side there was a row of trees but what was more striking were the mass of daffodils
that outlined the drive like yellow lamps.
It was the home of Andrew Lloyd Webber. Visiting Paul is always a real pleasure.
He is one of the artists that we deal with who I regard as being a real mate, it is never about money
we work together.
Every meeting is relaxed and we pick up on conversations that have spanned months.
As I arrived he was standing holding the gate open for me,
within a minute of getting out of the van he was saying "you have got to have a look at this".
So it went on, it was a great "fun" visit.

On the day I arrived his studio looked so romantic, I think I have mentioned before what a lovely location it is set in,
beside a small fresh water lake, fed by an underground spring,  you can even watch the bubbles rising in places and as long as you make sure that watercress is not in the way you can drink from the lake.
I understand that familiarity breads contempt or at least indifference,
but just how Paul and his wife Sarah ever manage to get work done as they look from the studio windows I will never know. 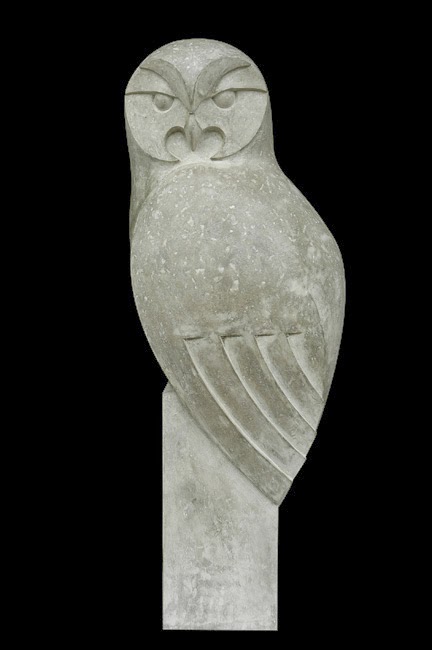 I think that Paul is one of the few artists who understands what "makes me tick" or perhaps we are just similar souls.
" Come on lets go feed the fish" he said in between all of our artist/art/galleries gossip.
We walked together through a small woodland area covered in wild garlic [you could smell it]
and bluebells to a clearing beside the water where he always feeds his Trout.
"This is how I spend my days"
he told me as he threw a crust of bread that hit a Mallard duck on the head.
"Sorry". 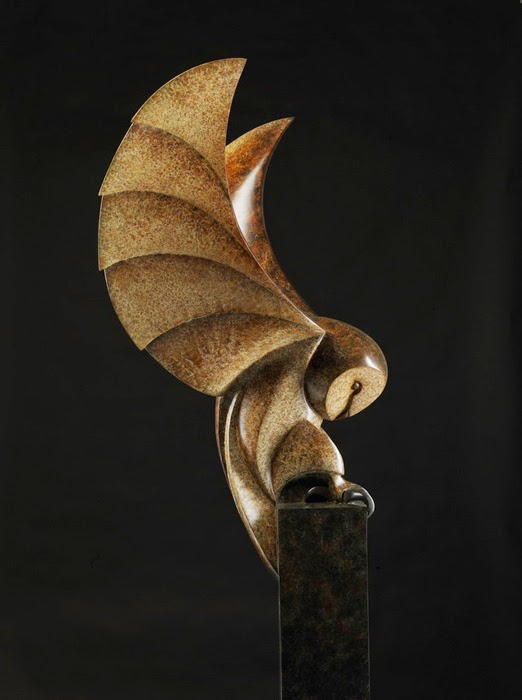 Despite what I have just mentioned Paul is a really hard working artist.
He is a person who lives for his art.
Sure, his art supports him [and me] but that is not why it is created, he just has to create.
As I write this he is on holiday in Cornwall.
He told me that this would be a great break because he will take some clay with him and come home with at least one new sculpture.

From the clay originals he casts his work in stone and more recently Bronze.
I visited to collect some marble pieces but before I left he asked "would I like to show his bronze work this July"?
Now let me think about that Paul?
OK
Posted by imagine at 12:26