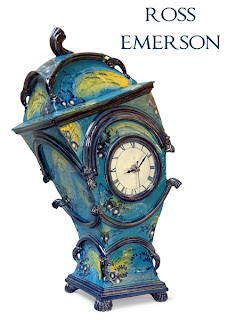 Writing this all I can hear is the sound of "ticking".
I have a sneaky feeling this is because I am surrounded by about a dozen of the incredible clocks by the sculptor 'Ross Emerson'.
This weekend we are holding our first solo exhibition of his work, it had been planned for September
but unfortunately the sculptor whose work we had planned to show is very ill, in fact he is in hospital.
The good news is that he is recovering and we now hope to exhibit his work maybe at the end of this or early next year. However, this did leave us with an empty space on our calendar and I really was at a loss to think how we could fill it.
I really couldn't think of anyone who could create enough work in a short time, until my thoughts
turned to Ross. 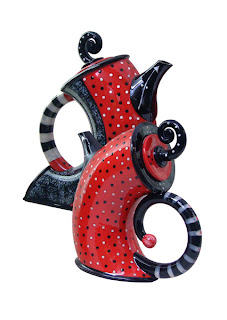 His work is very time consuming and as a result he is constantly working without a break just to keep ahead of the demand from the various galleries that are always asking for his unusual ceramics. 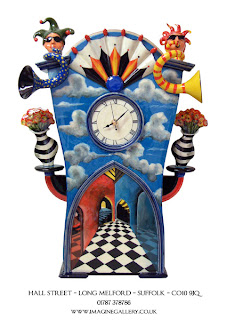 I wondered if there might be a chance that I could "jump the queue" and get him to bring his exhibition forward so that it would give me time to reorganise the rest of the year.
It was a tall order to ask but as they say "don't ask don't get".
So I did ask.
Ross being the kind and generous artist that he is, understood my problem but explained that it would create many for himself, but he said that he would give it thought and come back to me.
Two days later he did, "Yes" it was on.
He explained that he would "just have to start work earlier and finish later".
It is easy to understand why I like him so much, he is just one of those very rare artists who just can't bring himself to let people down, even when it is no fault of his own.

So it was that last weekend I found myself travelling south again to visit his studio in Devon. 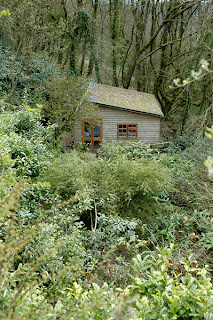 Although I am a frequent visitor to the home and studio of Ross I still find the the view of his workplace amazing, nestled in its own small valley and surrounded by trees.
In fact one side is built on stilts because of the valley slope and outside there is a balcony which has a view of the woodland. How he manages to get anything created with the many natural distractions I just don't know, but work he does.
I also find it hard to come to terms with the fact that he makes such very contemporary work in such a rural setting. I am sure that any first time visitor to this pottery would expect to find simple utilitarian ceramics, the sort of objects that Ross himself  uses daily in the family cottage.
But no, this is a very modern workshop. 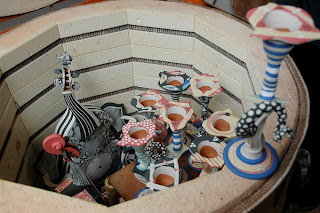 On each visit I am surprised by the quantity and quality of work that I find, all in various stages of construction, and it is the manner of the construction that I really find truly fascinating.

There is a great deal going on in the mind of Ross Emerson, and all of it very inventive.

I once spoke with the potter Peter Starkey, [a famous potter well published and collected] about Ross as at one time in the past he ran a studio where Ross trained.
"Whatever anyone thinks about Ross's work they will never find a better craftsmen, his techniques and
ability are truly amazing, his understanding of clay and glazes are first class". He told me.
What he said is true, I have often asked Ross how he creates some of his pieces and although he explains in detail I am often lost, as they are just so clever in their construction.
He truly understands the material with which he works. 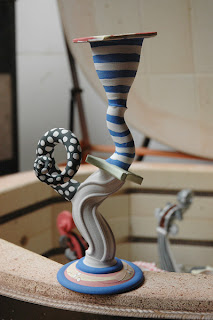 I do really enjoy "nosing" around his studio, discovering things.
Some are discarded pieces [that I would love to own] of ceramics, others are old pieces of paper with idea's and designs sketched upon them. 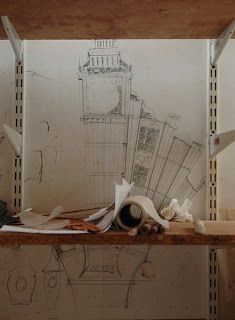 Sometimes, with the absence of available paper he will sketch on the table or the walls, just so that he can capture the idea that is in his mind before it has gone.
So it was that I found and photographed the drawing above.
"This looks interesting, what's it about"? I asked him
"Oh I wish you hadn't seen that, it is an idea I have had for years and at last I have actually made it for my exhibition with Imagine. It was meant to be a surprise when you unpacked it". 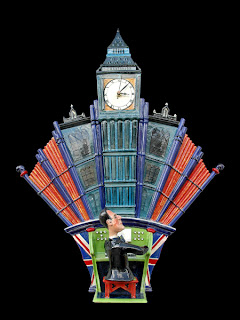 The next morning back at the gallery I did unpack it.
Even though I now had a hint of what I might find I was still mesmerised when I took the sculpture from the box, it is fantastic.
Although you can not see it from the angle of my photograph the face of the
"Westminster Organ Player" [grinder] is a perfect charecture of our beloved Prime Minister.
It is so well made with great attention to detail, plus it tells the time.
Ross has told me that it took him two weeks to make, "I will never do it again".

It is a piece of sculpture that I would love to own.
I am not sure what to name it in the price list catalogue.
I have been thinking maybe
"Same Old Song"
or perhaps
"Different Tune, Same Old Words."