This time a lot 'really' has happened since the last post.
We have moved to a new home, or rather the gallery has a new home
The new home is not actually new as like our last premises it is a very old building, but it is new to us.
The move has been "on and off" for nearly nine months and we had resigned ourselves to the fact that it would never happen until a few short weeks ago when I received a call asking
"would you be interested if....................."?
As a result the past few weeks have been a whirlwind of planning, moving and decorating,
I think that it would be fair to say we are exhausted, but there is no time to rest as we still have much to do before holding the "grand opening".

It all feels very strange and a little unreal and I am still awaiting for events to catch up with me,
or I suppose what I mean is that it all feels very normal and I hadn't expected that.
I also thought that I would feel a great sadness leaving the old building.
After all it has been my home [almost literally] for nearly seven years and the events that happened there really changed my life beyond recognition.
Having the gallery has been both the best and worst thing that we have done.
It has taken an awful toll on both our personal and financial lives, but for me it has become my life.
I often think back on my pre-gallery life, I think about the different places that I worked at, and the time
invested in making other people and companies successful regardless of the needs of my own family,
whose only demands were to see a little more of me.
So with having a place of my own, 'Imagine Gallery', I certainly wasn't going to start slacking and taking it easy as this time "it was personal".
It has been bloody hard, a lot of worry but a lot of fun.
But I certainly don't miss the old building.

Anyway, about the "new" building and why we moved.

Although everyone who visited seemed to love our old space,
for a very long time
we have felt that we had out-grown it.
Yes, it was full of beautiful and exciting works of art of all kinds, but, it was starting to feel too full.
Without a doubt art of all kinds needs a space of its own so that it can be viewed in isolation
and for a long time our space was becoming smaller.
Here we were a gallery in a rural area outside London showing different art from well known and even famous artists, all of them fighting for enough space.
Of course, this is how it seemed to me. Actually the artists who travelled [sometimes from Europe] to
see us all liked the place and would tell me "it is different".
So who knows?
All I am certain of is that we felt that it was time to grow.

So, as a result Irene has moved her framing business from Lavenham and now we are together in a
larger building which we feel has the room for us to grow and to bring to fruition some long held dreams and plans.
We initially dreamt and talked of having a gallery 40 years ago, now perhaps at last we can bring our
combined visions together and create a special place.
Of course for us whatever happens it will always be special.

With the help of some good friends we have worked non stop for two weeks to have the gallery
open for this weekend.
It is by no means finished but at least it is open for "business as usual" [or nearly as usual].
Different works of art have been arriving constantly for the past month, so many artists have tried to help and support our move by creating new pieces in time for us to show.
Many others will be wondering what has happened as almost all of my correspondence has stopped as
I have had so little time. So if anyone thinks that I have been ignoring them,
perhaps they will understand why.

Tomorrow will be our first day of opening, only a small part of the building is ready and the rest will need another couple of weeks work before we are ready to show the public but it will all be ready and beautiful in time for our first exhibition.

So below are just a few snaps that I have taken this afternoon.
The displays are still a little disjointed and things will definitely be moved around over the coming days
especially when we start completing the different area's on the first floor.
Oh, I didn't mention that we have a terrace on the first floor where I hope in time to have few pieces outdoor sculpture, plants, tables and chairs [ready for some sun].
Who knows? 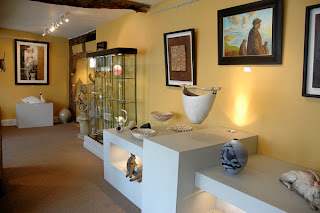 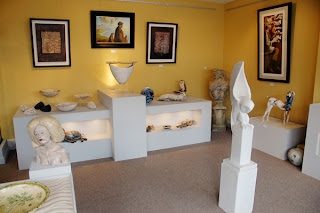 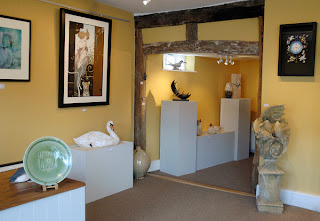 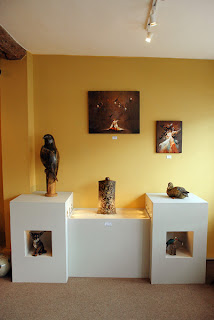 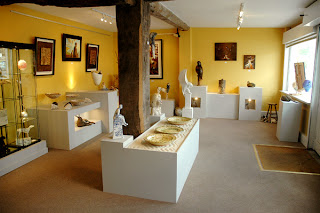 We have the plans and the dreams, at the moment these are the pictures of today's reality.