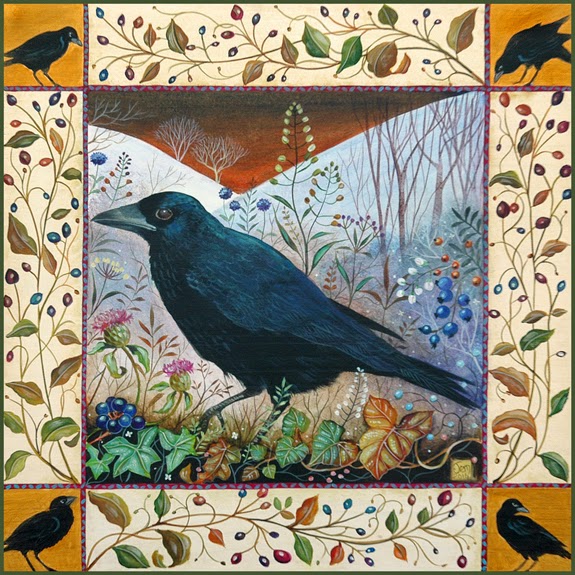 As ever, I'm very late telling you what has been happening and showing new pictures.
It seems that in a short space of time a lot happens and I get confused
[with me that happens a lot]
about what I should record first.
As a result images and memories build up until one day I suddenly realise that they are old memories
which I have never shared and probably never will because they are overtaken
by the most recent events and discoveries. 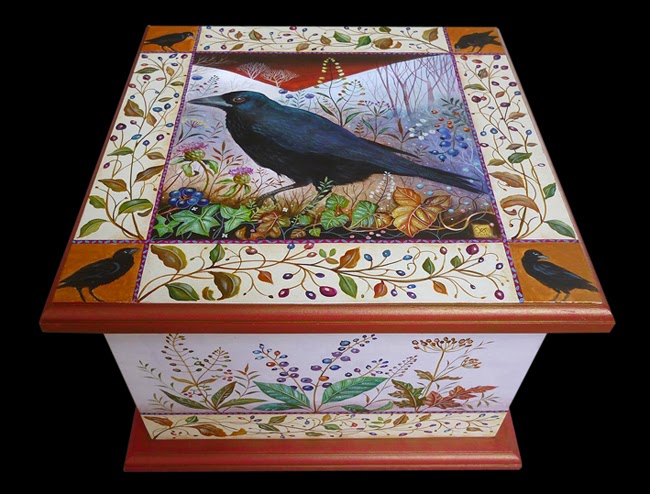 In fact I can't wait to share my latest discovery of two days ago,
but I thought it might be best to take a step or two backwards and show what has been happening,
after all it's a bit silly to talk about the future when there is so much happening today.

As John Lennon told us
"life is what happens while you are busy making other plans".

And who knows maybe those plans will never happen so here is a small glimpse of what has happened. 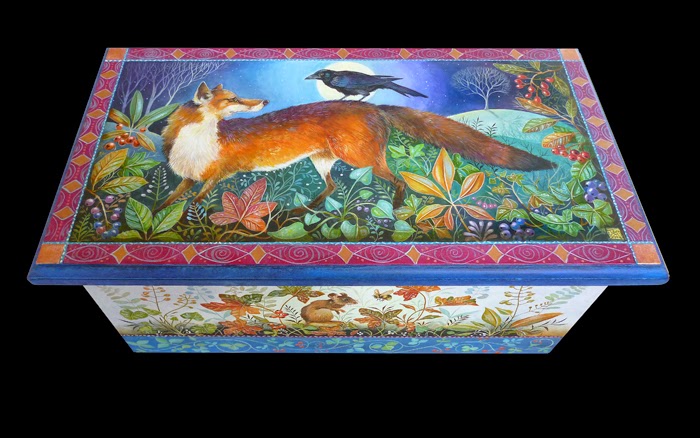 Way back at the start of the year I told you about a remarkable lady
Jemima Jameson
An artist who paints on wood, or I suppose a better way of describing her art is to say that she records
her life and the animals she shares it with in paintings
and for some reason she chooses wood as the surface that she paints on.
Perhaps, just perhaps this is because her husband is a carpenter.
Whatever the reason I am pleased that she does, as much of her work is painted onto wooden boxes.
It is a selection of these that we are exhibiting at the moment. 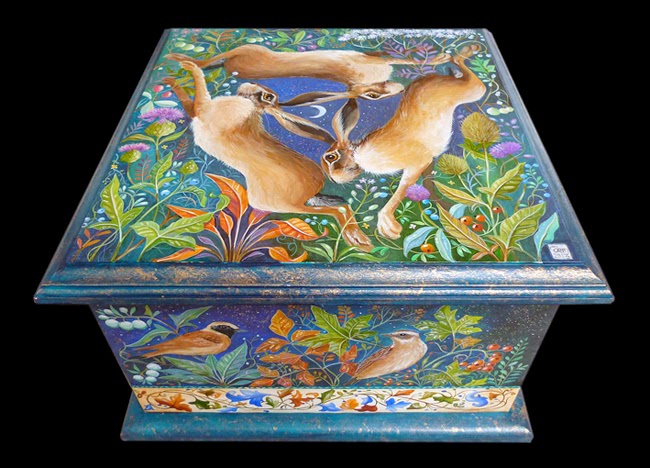 The exhibition has been planned for a long time,
and it needed to be as her work is highly detailed and very labour intensive to produce,
plus of course the boxes have to be created before she can even start to plan and paint on the surface. 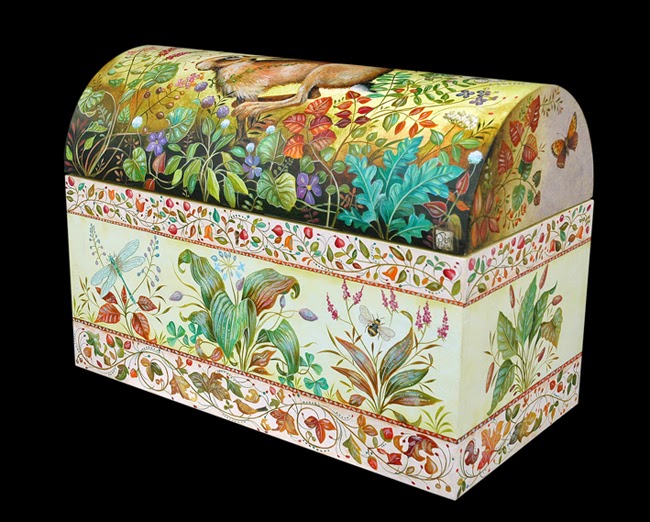 I love Jemima's art, it is so very gentle and innocent,
it makes me think of times long past and for those reasons it reminds me of my childhood.
Her scenes of Hares running through a winter landscape are visions from a child's Christmas dreams.
So to are he vibrant summer scenes.
We can all remember those Summers without end, the summer holidays when it never rained.
It seems that so do some of her animals, like the Hare on the box below.
The title is 'The Joy of Life'.
Although it is not shown in the photograph the Hare is being joined in his chase by a multitude
of different birds, butterfly's and Bee's.
The title really does describe the image. 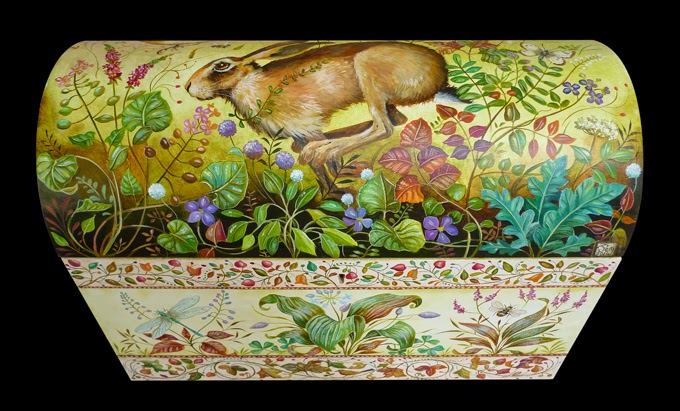 But, not only do her lids show beautiful images, every surface of her boxes are covered in illustration.
Her love of old manuscripts and illumination is clearly evident.
They truly are works of art, and have been described by many visitors as
"heirlooms". 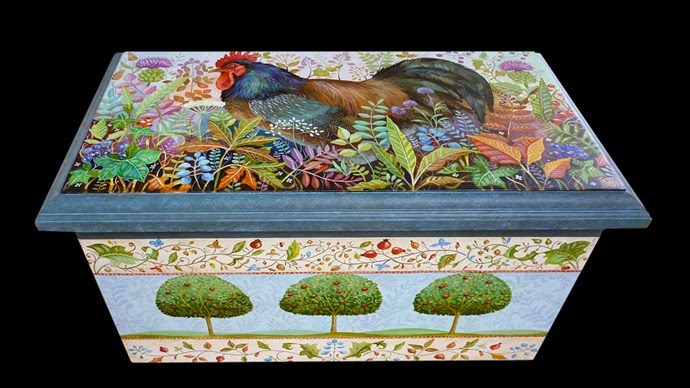 In fact Jemima used to describe them as "Memory Boxes"
And that is exactly what they are and is the reason that people purchase them.

I can't tell you of some of the reasons that they have been purchased because they are too personal
and sometimes sad.
But it seems that every new owner intends to store something very precious of 'their' life
inside one of the boxes.
Usually with the intent that it will be kept within the family and will have other precious
[not in value, but sentiment]
pieces added by other family members.
They truly are boxes in which you can store your happiest memories. 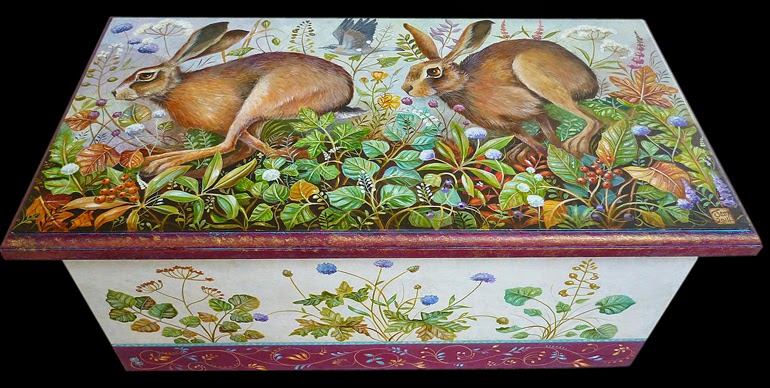 For myself what has been an additional treat is that Jemima relates to my love of "storytelling".
Each box arrived complete with a little story about the animals shown
or how they had inspired the paintings.
She told me "I know you like stories."
I do especially when they are innocent and of a sentimental nature. 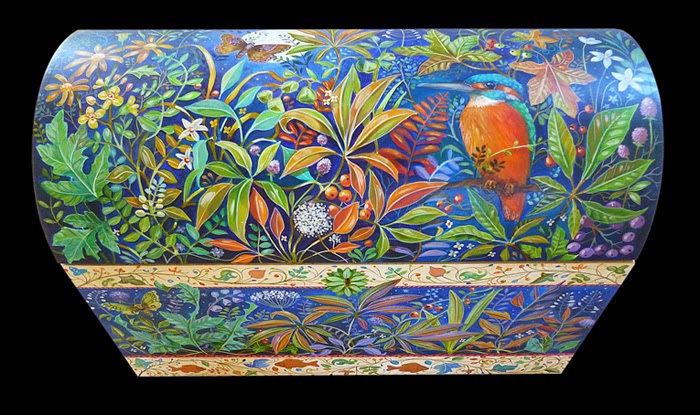 For instance
The box at the top of the page is titled
The Swaggering Crow"
It is about the crow who lives in her garden, or as Jemima says
"maybe we live in his garden".
He struts up and down in front of her windows, admiring his own reflection in the glass
[or perhaps he fancies his new partner].
And of course she has given him a name.
Samual Swagger
A good name for such a proud beast, although I think I would add "esquire" after the name. 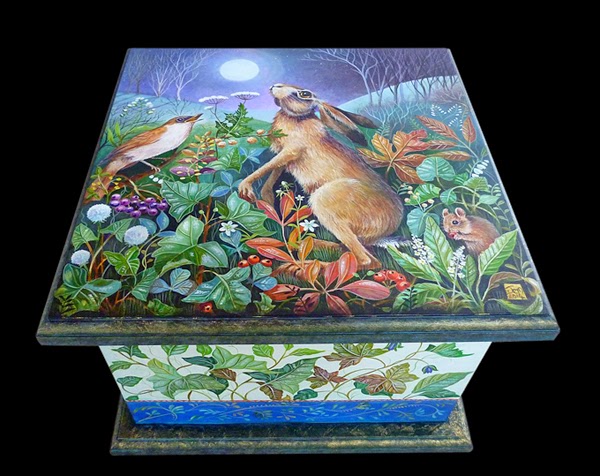 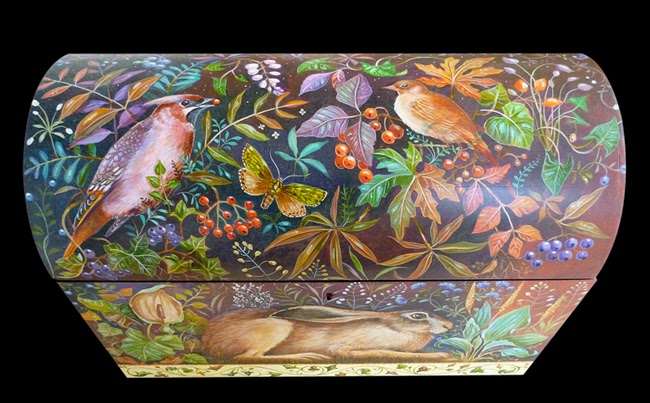 The opening of her exhibition was visited by the artist Terry Pastor
the man famous for creating David Bowie's 'Ziggy Stardust' album cover.
He told me that he thought that her work was "incredible and so very affordable".
"If I was approached to create this sort of art onto wood I would just say, sorry you can't afford me
because it is so detailed and would take just so much time".

He called me the next day to ask, would I tell Jemima that he thinks her work is incredible.
"Without a doubt she is amongst the best artists that your gallery exhibits".

Coming from an artist whose work is so very different from her own
I thought it was a lovely heartfelt compliment.