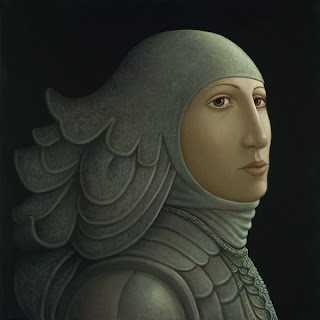 I have a feeling that this will have to become a two part post as different things that are happening in the gallery all blend, and together they make for an interesting story.
I think it's called serendipity.
But I do intend to write about lots of things but it never seems to happen, so let's see.

The picture above will form a little piece of our Christmas exhibition.
It was painted by the artist that I mentioned before.
George Underwood
It is a painting that I absolutely love, it ticks all of the right boxes in my imagination, desires and loves.
Oh! How I would love to own that picture, unfortunately someone else does but the image will still be
here for sale in a couple of weeks, well that is the plan. 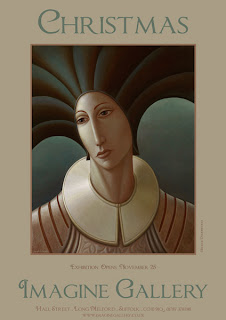 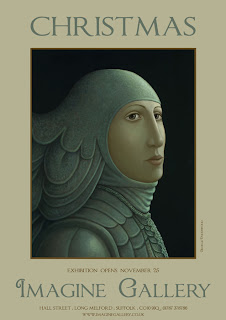 As usual I seem to be fully occupied preparing for another exhibition,
which at times seems to be my full time job.
As soon as one is finished I seem to be behind on preparations for the next, but I suppose with the next
one I should have no excuses, after all Chistmas happens every year.
So the last week has seen me busy trying to prepare a full page advertisement for the coming show.

Having been involved in advertising for most of my life I now feel very cynical about it, in fact I am
sure that it is on the whole pretty ineffective, but it is certainly a quick way to get rid of any money
For me the only adverts that work are the simple bold ones with strong images, the sort of thing that makes you pause as you are turning the page of a magazine.
So by choice I would just show a picture and no text.
Idiot that I am, even I understand that might be a bad idea, so I just go for minimal text.
So with great anticipation I was looking forward to the pictures of the paintings from George,
I just knew that he would have something I could use, and of course he did.

He sent me many pictures, all of them beautiful, but.
There was one painting I was in love with and which I felt had a seasonal feeling about it, but understanding that we would have nothing of this to show I prepared another advert after
spending hours deliberating over his many beautiful paintings.

I really liked my final choice and felt sure that it would have an impact, then, just as I was about to send it to the publisher the image I was besotted with arrived from the artist.
So it was back to the drawing board and four hours later our overdue Christmas advertisement was sent off, next time to be seen in a magazine. 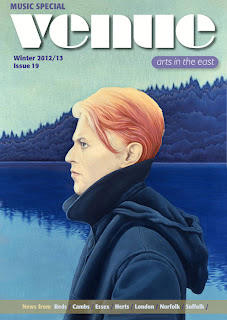 The picture I chose is called 'Of the Lowlands', it features the angelic looking Knight.
I was so happy that my original choice was going to be printed, and then things got even better.
The next day the publisher contacted me to ask if they could use one of George's other paintings for the front cover, they attached an example of how the cover would look.
My Christmas had come early.
They were going to use 'The Man Who Fell to Earth' painting of David Bowie.
All in all not a bad result and certainly one that should attract a "little" interest. 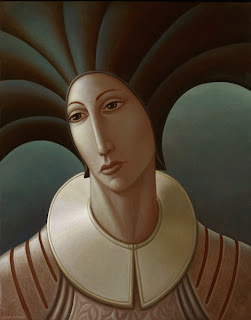 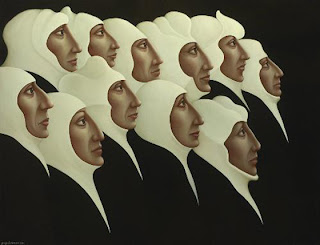 I don't think that it is hard to understand why I am excited about this particular artist,
his paintings speak for themselves.
Unusual, beautiful and all with a story to tell [one of your choosing]. 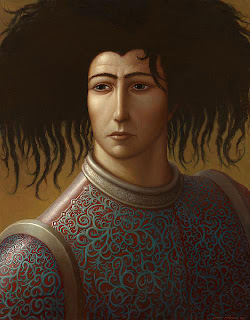 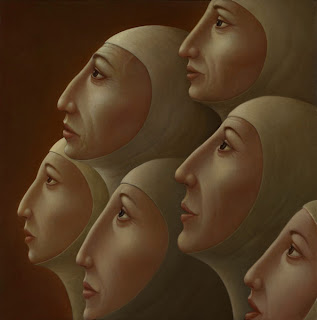 It now seems [fingers crossed] that we will have for sale a limited edition signed print, [10 only]
of my favourite painting, an edition that will be unique to Imagine Gallery.
There is still much to be done and the quality has to be vetted by the artist, so let's see.

I must admit that none of this is what I had intended to write but as you know I get easily distracted,
so maybe now the two part post will have to be a three part post, or perhaps an abbreviated version of what might have been.

The clue is the David Bowie painting.
Not only is Bowie a great collector of Georges paintings but they also went to school together.
That really is a story for another day, and perhaps not mine to tell.
But you know how I like to talk.